After the birth of their first child, Christophe and Patricia Ponsart ran a triathlon together. Then they did it again after their second kiddo, and yet again with their third.

The tradition checked a number of different, important boxes for the couple. It helped them stay in shape, gave them a goal to work toward together and reminded them not to lose touch with the core of their growing family — that is, the two of them.

Not being bare-minimum kind of people, the Ponsarts didn’t stop at just three tris — they’ve now run seven together and plan to make it eight with the CapTexTri here in Austin on May 25. Recently, Patricia and the couple’s oldest child — daughter Kaliana, who’s 12 — trained for and ran the Spa Girl Triathlon at the Hyatt Regency Lost Pines Resort together, and the whole family of five plans to run the El Salido Mini-Triathlon in May. At the time of
this writing, Patricia was also training for a half Ironman in Galveston, April 5.

“Having kids has taught us to continue playing and to value the art of playing, so Chris and I really try to play and play hard — both with our kids and without them,” Patricia said. “It’s one thing to be like, ‘Go run and kick that ball, and you’re going to do great in soccer.’ It’s another thing if you’re out there kicking the ball with them, or if they’re having to wait at races with signs and cheer on Mommy and Daddy, and then you do the same for them.”

In a city as active and outdoorsy as Austin, families like the Ponsarts are everywhere.

Take Mason and Ariel Quintana, for example. Sports and fitness have played a significant role in the couple’s relationship since the very beginning. They met while working student jobs at the UT-Austin Rec Center during undergrad, and Mason vividly remembers the pickup basketball game when he first realized just how athletic Ariel was. Throughout college, the pair competed together on intramural teams and even enrolled in a volleyball class.

As adults, they tried out various competitive outlets, with Ariel diving headfirst into the world of triathlons and Mason moving from mountain biking to eventually finding his niche in road cycling. Ariel estimates she’s probably participated in somewhere between 15 and 20 triathlons and completed the MS 150 (a charity bike ride from Houston to Austin) three times. To this day, Mason remains very active and competitive in cycling, having earned his Category 1 designation from USA Cycling and regularly racing all over Texas and neighboring states. 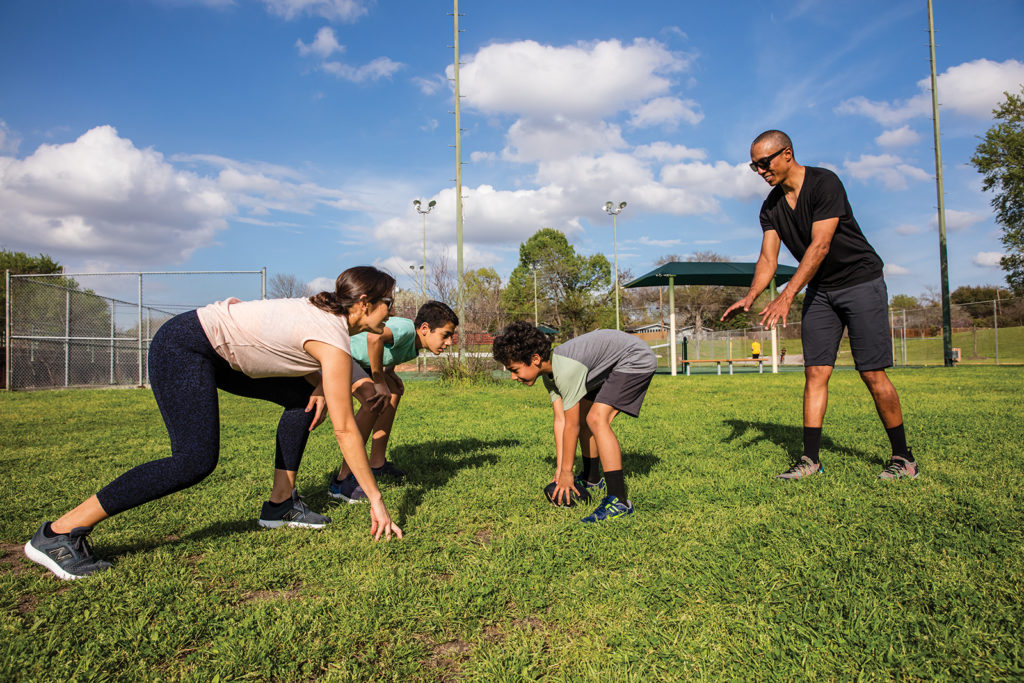 Cycling not only serves as a competitive outlet, a hobby and a great form of exercise for Mason, who played football and ran track in high school, but it also sets the tone for the rest of his life.

“When cycling is right, everything else kind of falls in place,” Mason said. “If I’m not competitive, if I’m not in shape enough to get results or feel like I’m still relevant in whatever category I’m racing at, then the rest of my demeanor and everything suffers.”

“He’s not pleasant to be around,” Ariel confirmed.

Hilary Chung met her husband Justin through her job as a personal trainer. He had recently moved to Austin and signed up for a free training session at Castle Hill Fitness.

“I was annoyed that I had to do it, because you don’t really get paid that well for a free training session, and it was a day that I don’t normally work,” Hilary remembered. “Then, he and I just so happened to both be from Michigan, so it was like we right away had that in common, and then we became good friends, and then we started working out together all the time and coming to my classes…”

And, as they say, the rest is history — a history that includes the birth of three children.

Hilary admits that she’s lucky to be able to work out as part of her job, which mostly exempts her from the struggle many parents face just trying to fit regular exercise into their busy schedules, but she also says she’s feeling stronger than she did before having kids in more ways than one.

“Physically, emotionally, all the ways,” she said. “I feel like I try harder because I have less time, so I really kill it when I’m working out.”

Hilary is also keenly aware that her children watch her and Justin closely, and she strives to set a good example for them.

“I’m always in a better mood when I work out, so I make sure they see me working out to be positive and as a destressor,” Hilary says. “I want to be the healthiest, and I want to be the strongest for my kids, so I feel like it’s super important. It’s the most important, I feel like.”

For Ariel, now the proud parent of two boys, motherhood required a change in the way she approaches fitness. She kept competing in triathlons until the birth of son number two, and even after, occasionally participated in a triathlon relay, but she noticed a significant shift.

“All of a sudden your body changes and your priorities change, and your time is so limited that I wanted to find something that I could still do, but I didn’t maybe feel like I had that need for competition as much,” Ariel explained. “Not to say I’m not competitive. I mean, if I’m out there on my bike and I see somebody ahead, I’m still going to chase them down and try to catch them.”

Post-kids, Ariel may not be competing in as many organized races or playing on volleyball, basketball and softball teams like she did growing up and in college, but her need for an active outlet didn’t disappear.

“I feel like it’s just something that I have to fit into my week. I can really tell my mood is different if I don’t have a couple of good workouts during the week, whether it’s weightlifting or even just like a 30-minute run,” Ariel said. “It gives me energy, and the kids see that at least we’re always doing something to try to keep ourselves healthy. I’ve always thought that even though the kids are our focus, unless you take care of yourself, you’re not going to be any good to anybody else.”

Hilary ran track at Northwood University in Midland, Michigan, and her husband grew up swimming. Unsurprisingly, their kids have already begun to find their identities as athletes. Hayden, 9, plays baseball, basketball and flag football. Six-year-old Violet does gymnastics and basketball, and Hilary hopes she’ll take to volleyball once she can join a team in first grade. Colton, 4, does T-ball and parkour and has some serious speed, so his mom thinks perhaps he has what it takes to follow in her sneaker-steps.

Even with all of her aspirations and visions for the kids, Hilary is very conscious not to push them too hard into any one particular sport or to achieve anything specific.

“I don’t want them to burn out or get sick of it or feel like we’re making them do anything,” Hilary said. “(Hayden’s) really tough on himself. I’m like, ‘I only care about you trying hard and having fun.’”

As busy as things can get with three kids and their various activities and two working parents, Hilary says structure and scheduling makes it work, and that includes scheduling workouts for Mom and Dad.

“We just schedule it in as if it were a doctor’s appointment or whatever. We make it part of our little routine.”

Patricia competed on the men’s varsity wrestling team in high school and pole vaulted her way to a college scholarship at San Diego State. Christophe, on the other hand, participated in volleyball and diving. Their kids have found their way to a wide variety of other sports: Kaliana to competitive cheerleading; Kiptyn, 10, to basketball, taekwondo and swim team; and Koda, 8, to soccer and taekwondo. But when they’re all together, you’re most likely to find the Ponsart family running or biking around Town Lake or out on the water wake surfing or wakeboarding.

Life with the Quintanas looks slightly different. While 7-year-old Nico has picked up soccer, enjoys bike rides with Dad (as long as they don’t last too long) and will gladly challenge you to a race, a pushup contest or a speed-eating contest, Mason and Ariel describe Cruz, 12, as their brainiac, their little engineer. An avid reader and builder of Legos, Cruz is something of an enigma to his athlete parents.

“As soon as Cruz learned how to ride a bike, which was the goal, he just goes, ‘Well, do I have to do this anymore?’” Mason remembered.

Mason had dreams of creating his own three-man, father-and-sons cycling crew, but it looks like, at least for the time being, he’s on his own. Instead, to get their whole family outside and moving together, the Quintanas go hiking, canoeing, swimming and camping. If there are animals to see and study, all the better, as far as Cruz is concerned.

They also make a concerted effort to promote healthy eating at home, which starts at the grocery store. Nico and Cruz often accompany their mom on food shopping excursions and are tasked with picking out the vegetables to go with dinner, so they at least have a say in what’s being served. When a vegetable makes it onto the “approved by Nico and Cruz” list, the Quintanas are also not shy about serving that veggie up on a regular basis.

For the Ponsarts, the key concepts when it comes to nutrition are “balance” and “all things in moderation.”

“Every time they grab one unhealthy thing, they need to grab one healthy thing too,” Patricia said. “We’re not big believers in limiting them or monitoring them or obsessing over it. It’s more just teaching them how they feel after they eat different foods and how it’s impacted them and their body and allowing them to make the right choices on their own without having to be overly regulated by us.”

For all three of these fit Austin families, there’s a unique joy that comes from watching their younger members discover sports, fitness, health and vitality in their many forms.

“Probably my favorite part almost so far of being a mom is just watching them grow into little bodies and learning what works and doesn’t work for them,” Hilary said.

Competing in the Spa Girl Triathlon with Kaliana, Patricia said, was “one of the coolest things I’ve ever done with her.” And even Cruz Quintana gets amped up to join his parents in cheering on his little brother at the soccer fields.

“Work hard, have fun,” Hilary said, sharing her philosophy for her career as a personal trainer, as well as for herself as an athlete and exerciser and for her kids as they explore what’s out there. “If something is not fun, I feel like it’s not worth it.”