What comes to mind when you think of a home gym? Is it a garage turned into a partial gym space? One-half fits actual fitness equipment, while the other half is filled with storage or space to park the car. Or maybe you think of a guest room with a spin bike or treadmill in the corner with a few light weights and a stability ball.

If that’s what you think of when it comes to home gyms, then “The Bunker’’ is anything but an ordinary home gym. Any home gym that has its own name probably isn’t.

The Bunker is a 510-square-foot structure that sits a few feet to the side of Cal and Peyton Callahan’s home in Westlake Hills that has been turned into their own private home gym.

“The original plan was to use a section of their garage as a ‘home gym,’” says builder David Saenz, owner of Brindle Homes Inc. “When they were going over their requirements for the gym, the realization was they had more equipment than space in the garage.”

So, Saenz and the Callahans got to work creating a simple but nice project that would fit all of their equipment. Thus, they created The Bunker.

The word “bunker” is fitting for the space. It’s boxy and chest-like and has openings to the outside like the word’s definition. Saenz says he has been a part of several projects that have included home gyms in the past, but none compare to this project.

“The sheer size and that it is a free-standing structure make it unique to other gyms that I have been a part of,” Saenz says. “Most of the equipment they have is the same as Onnit.”

The Bunker is simple, but still nice. It has exposed studs and rafters and is made with vertical grain fir — sawn perpendicular to the growth rings of the tree. This means that if you are looking at a piece of vertical grain wood, you can see the lumber’s tight growth rings in straight lines running vertically up and down the face of the wood. Minimal electric fixtures.

It also has large, custom, sliding barn doors that open to the outside, which help with airflow since there is no air conditioning.

Saenz says they worked on the structure using an agile process and adjusting as the requirements changed. They included a couple of modifications during the process, such as the addition of a Big Ass Fan and skylights.

As Saenz says, The Bunker has similar equipment you’d also find at other gyms around town. There is a full selection of kettlebells, free weights, bars, weight plates, slam balls, steel maces and much more. It also has a climbing rope, gymnast rings, a rowing machine, a recovery bike, a squat rack as well as a Peloton bike. 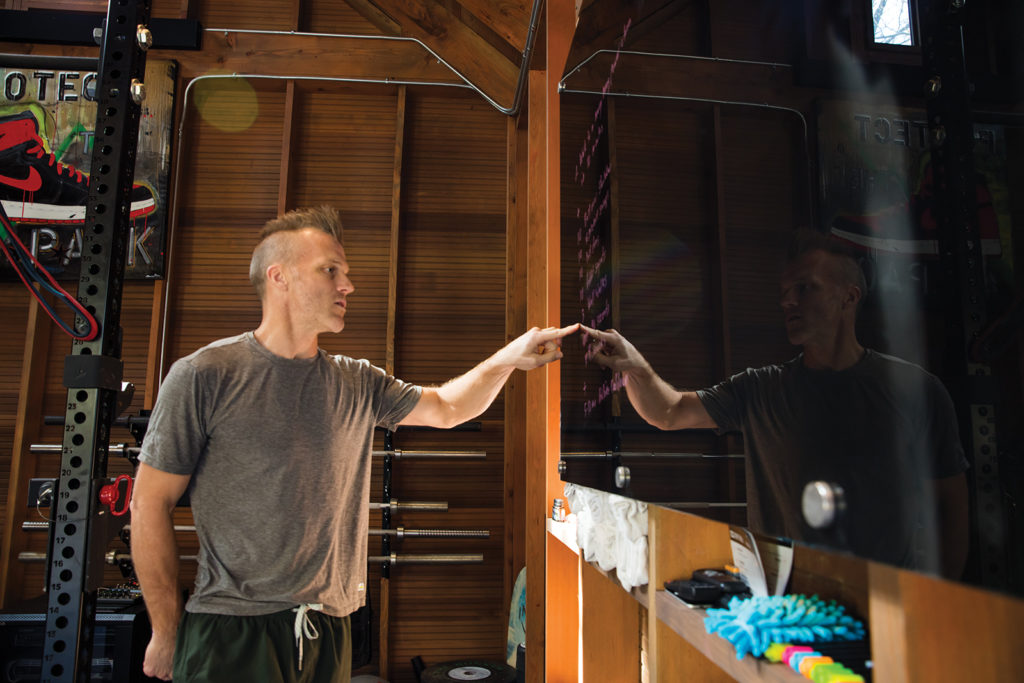 There is a dry erase board for writing out the day’s workout and steel plates against the back wall to use for handstands or other wall exercises. Further out in the lawn, there are bars for chin-ups and pull-ups, as well.

And like most commercial or private gyms, The Bunker has a Jacuzzi infrared home sauna as well as a cold plunge tub made from a jerry-rigged deep Freezer.

The Bunker also isn’t a home gym that barely gets used and where dust collects on the equipment. Both being part of the wellness community — Peyton as a wellness coach for women and Cal as host of The Great Unlearn podcast — it’s no surprise fitness is very much a part of their routine and lifestyle.

Cal says both he and Peyton use the gym at least four to five times a week and sit in the sauna almost every day. Their three active kids use it as well.

Though it is a home gym, the Callahans also use the space as an opportunity to share their love of fitness with others and to embrace the health and fitness community. They enjoy inviting friends over to workout with them, and some even have permission to come use the gym on their own (whether the Callahans are home or away). They also have a spot on the side of their tub for their friends brave enough to take the cold plunge.

The Bunker truly is not your ordinary home gym space.

“The Callahans are great clients — they allowed me to raise the bar (pun intended) with the level of quality and detail,” says Saenz.