Melinda Vague is one tough cookie. Growing up, she could always be found outside, being active and playing sports. She went on to play tennis and dance, and as an adult, she quickly found her professional calling in the fitness industry where she’s made it her mission to teach others to be tough.

So, perhaps it should be no surprise that following a battle with cancer that resulted in the above-elbow amputation of her right arm in 2017, the 33-year veteran of personal training jumped right back into coaching workouts right after she finished a post-amputation, three-month regimen of chemotherapy.

Yet, if you find yourself in one of Vague’s classes, one can’t help but be impressed and inspired. Two years after the amputation, she’s back up to a full schedule of 18 classes a week at nine different locations — gyms, retirement homes and corporate facilities — around Austin, in addition to training private clients. She teaches everything from boxing to spin to water aerobics, boot camp and step.

Armed (pun intended) with a prosthetic made by Austin’s own Blue Sky Prosthetics and three different terminal ends from TRS Prosthetics out of Boulder, Vague can pretty much do it all in the gym. One end, called the Shroom Tumbler, is flat, good for floor work and yoga. The second has a round clamp for holding dumbbells or barbells, and the third is a two-pronged hook that opens and closes to facilitate two-handed carrying of larger items.

“People are just kind of in awe,” Vague says, “Like, they can’t complain about anything. They’re like, ‘Oh, she can do it with one arm — why can’t I do it with two?’ So, I just send that kind of message out there to my fitness world that everything is possible.”

A different person might have seen an arm amputation as the end of a career in fitness, but from the very first day she got the news that the best way to save her life was to lose the arm, Vague refused to consider that possibility.

Like the athlete she is, Vague trained for her upcoming challenge. As she waited for the surgery date, she practiced life without her right arm. And yes, she was right-handed. She’d pump gas, get dressed and eat dinner, all with only her left arm to get accustomed to her new reality.

“If you let it define you, then you’re toast,” Vague says. “So I said, ‘I’m still in charge.’ I can still do everything that you do, but I just do it differently.”

Not that it was easy, of course. When Vague first returned to teaching classes after the amputation and chemotherapy, she had lost 12 pounds of muscle and was anemic. She remembers having to take a seat on the floor during one spin class.

Vague got her first prosthesis five months after she returned to teaching classes and training clients, so she had gotten pretty used to — and pretty good at — doing things with one arm. The first prosthetic, although useful for weightlifting and other relevant activities and tasks, was heavy — heavier than her arm had been, and it made her feel weighed down and out of alignment.

The team at Blue Sky was open to that feedback, however, and they soon fashioned Vague a new arm, this one with a hollow forearm piece, which made it much lighter. The new prosthesis weighs in at just 2.5 pounds, about the same as Vague’s right arm before the amputation.

Vague is much happier with this one, and she’s made it her own, personalizing it with a few sparkly blue gems. She even prefers it to her myoelectric prosthesis, an externally powered artificial limb that looks and moves like a real arm and hand, but which she says is heavy, hard to put on and requires batteries that need charging.

“It’s not life-changing,” she said of her prosthesis, “but it is life-enhancing.”

Vague will kick your butt in her boxing class at Tapout Fitness off Highway 290 (take my word for it!), but she admits some activities remain out of reach. She still cooks, but she can’t chop, so she buys pre-cut vegetables. She doesn’t wear much jewelry and blouses with those tiny buttons at the back of the neck that require quite a bit of effort to get fastened. She doesn’t order steak when she’s out to eat, and walking her two dogs poses a unique challenge, especially on rainy days when there’s an umbrella to juggle in addition to two leashes and poop-scooping duties.

“But you know, you just adapt,” she says. “That’s why they call me an adaptive athlete, because I have adapted what I do to what I need to do to do it.”

Vague is Blue Sky Prosthetics president Aaron Foreman’s favorite type of patient. A lifelong athlete himself, Foreman has developed a specialty in working with amputee athletes, estimating somewhere around 30 percent of his current patients are athletes.

“Melinda was exceptionally determined,” Foreman said. “I could tell from the very beginning. When I met her, it was right before her amputation, and she was already planning on how to get back to all of her activities.

For one, tennis player and coach Dennis Ralston, a member of the International Tennis Hall of Fame who won a Wimbledon doubles title in 1960 and finished runner-up in 1971, partnered with none other than the legendary Arthur Ashe. Ralston had his lower left leg amputated in 2010 after a series of surgeries that resulted in multiple infections in his foot. He now has custom prosthetics that have helped him get back to coaching tennis and playing golf.

Then, there’s James Ortiz, a former Texas State track and field athlete who, in 2006 during his senior year in college, had to have his lower left leg amputated following a bicycle accident. Ortiz had won three NCAA titles in the 1500-meter and still holds the school record in that event with a time of 3:48.35. But after the accident, he wasn’t keen on jumping back into running right away. When Foreman and cross country athlete Kevin Kimball visited him in the hospital, he didn’t want to talk about getting fitted for a prosthetic running foot.

But Ortiz eventually came around, and in fact, he got so comfortable with his prosthetic running foot made by prosthetics company Össur, that he set a new 1500-meter world record for below-the-knee amputees at the Kansas Relays in 2013 with a 4:33.46 time.

Another Blue Sky patient is mountain biker Eric Scott, creator of the mountain-biking-focused YouTube channel No Front Brakes. Born without a right hand, Scott had been riding bikes with just one hand until Foreman built him a prosthetic arm about six years ago.

“(Eric) was incredible, because mountain biking is so hard with two hands, but with one hand, it’s really hard,” Foreman said.

Swimmer Lindsay Grogan, who lost her left leg in childhood as a result of a condition called focal scleroderma, went to the 2016 Paralympic Games in Rio and has her eyes on Tokyo.

Blue Sky has a full prosthetic and orthotic lab in Austin, where Foreman and his team — which includes former University of Texas at Austin track and cross country athlete Kevin Kimball and lead technician Chad Viadure, himself an amputee — fabricate all of Blue Sky’s devices in-house, using advanced carbon fiber resins and plastics, which are fitted and customized to each patient and then tricked out with accessories and ends from companies like TRS, Össur and Ottobock, which has its North American headquarters in North Austin. 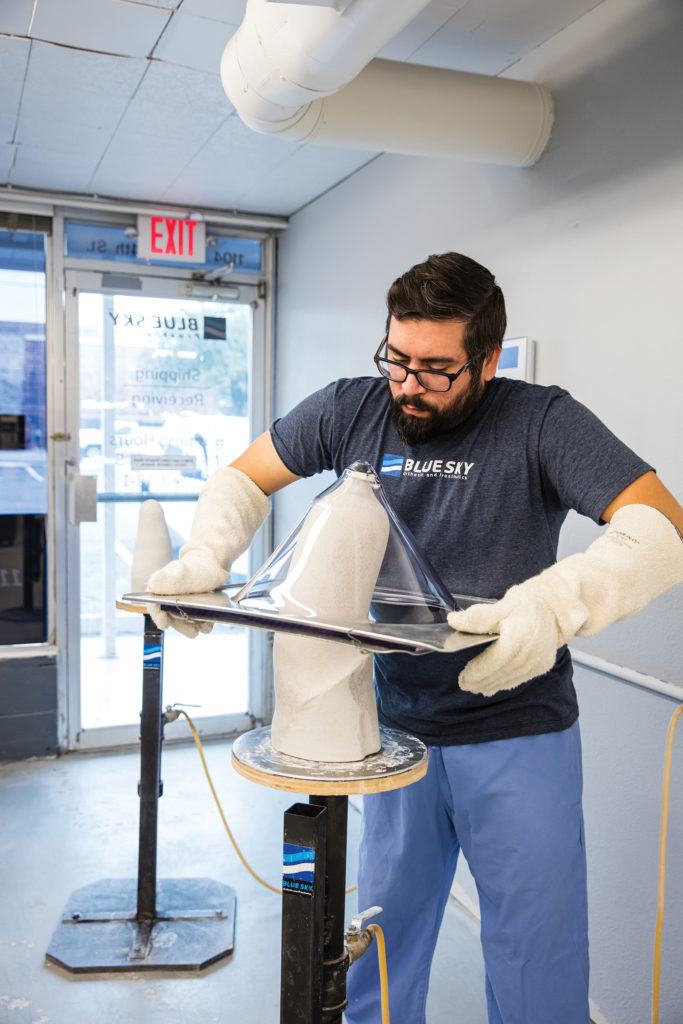 With all of his patients, Foreman relishes getting a person back on his or her feet after an injury, accident or illness — but with athletes, it’s even more satisfying to help someone return to a passion they might have thought was now impossible.

While fitting a patient for a new sport-specific prosthetic, Foreman, Kimball and crew get pretty hands-on. They’ll head out to the Veloway for cyclists, or go for runs, analyzing the patient’s gait to make sure the prosthetic is working properly. And of course, like with Vague’s prosthesis, sometimes it takes a couple tries to get it just right.

Although Vague has been back to boxing, working out and walking the dogs for quite some time now, she still has new goals in mind, always looking to push her limits. During an upcoming trip to visit a good friend in Los Angeles, she plans to tackle an advanced hike in the Hollywood Hills. The hike is a tradition in the friendship, one they do every time Vague visits LA, and Vague never considered letting this trip be any different. She’s already ordered a rock climbing hook for the occasion.

Foreman, although always impressed with Vague’s determination, is not surprised at her resilience.

“I’ve worked with a lot of amputee athletes, and it’s like a challenge for them. They don’t let a limb loss change their perspective on being active,” Foreman said.

For Vague, the amputation may have even made her a better trainer — simply by living her life, she models the toughness, courage and grit she wants to bring out in her clients.