Deep respect, intentionality and community filled the air at the celebratory launch party of Austin’s first deaf yoga instructor, Lilli Erin Beese. Watching the interactions and signing between the radiating faces of those who just came out of the yoga studio, it was easy to get a sense of what deaf culture really is and how yoga will now play a part in strengthening the community.

Brooke Sipek, a friend of Beese and yoga student, described deaf culture as a unique world where everyone understands each other.

“Deaf culture, to me, means having full access,” Sipek says. “Being part of a community together and supporting each other. We understand our challenges, our needs and we know what each one of us is dealing with outside in the other world.”

According to Texas School for the Deaf Foundation, almost 20 percent of the state’s deaf population lives in the Austin area. Despite the large population of deaf people in Austin, Beese said when she moved here in 2018 from the UK, she noticed a lack of yoga accessibility for the deaf.

“The deaf ecosystem is what made me feel welcome,” Beese says. “There are lots of different businesses in Austin for or owned by the deaf community, but there is no accessible yoga, no yoga studios or yoga teaching regarding the deaf community.”

Accompanied by her husband Nick and her 10-year-old daughter Ava Mae, Beese moved from England so her daughter could attend school at the Texas school for the deaf in Austin. After realizing a track in clinical psychology was not for her, she decided to pursue what made her feel at home — yoga.

“Yoga is my one constant, and I can do it anywhere, and I know I will feel so good afterwards,” Beese says. “It is just really nice to have in my life. We have ups and downs, ups and downs, but practicing yoga, that is the one thing that is always up. Yoga makes me a better person, and I am really thankful I can share the gift of yoga with the deaf community.”

Beginning the process of emailing yoga studios to join their teacher training programs, Beese said most were not very encouraging.

“I emailed one program who actually told me no because, ‘Deaf people can’t do that,’” she says. “I just felt criticized from the get-go.” 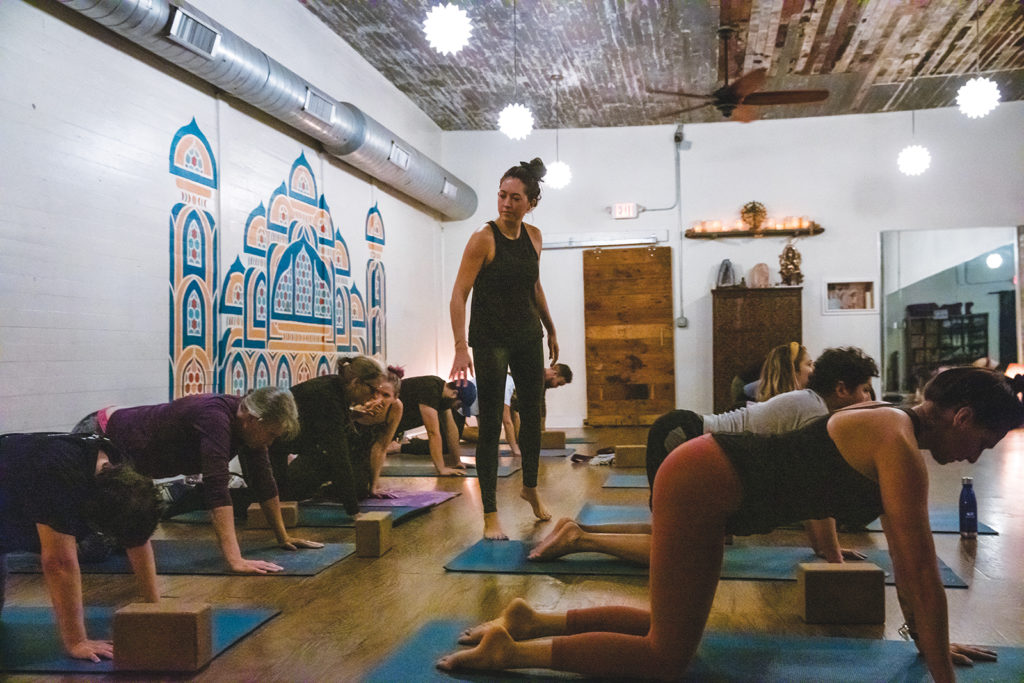 After emailing many studios, Beese said she was ready to give up, but her husband encouraged her to try one more time. So, she emailed Practice Yoga, a local studio on East 6th Street. Beese said Practice Yoga was quick to respond, giving her many opportunities to learn and enthusiastic for her to come and train.

“I kept reaching out to places and kept getting nos, but here I finally got a yes,” she says. “It was just such a breath of fresh air. Once we found an interpreter, everything fell into place. They were all such great people and very supportive.”

After she graduated from the program, there was a question of who would come to a yoga class taught in American Sign Language.

Practice Studio let Beese teach a four-week ASL yoga series once a week throughout the fall of 2019. At the last class day on November 9, over 40 people attended the class.

“I have been practicing yoga for 15 years, but I don’t think I ever felt like I was part of a community until now,” Beese said during the celebration ending her fall series. “Getting together with friends and talking about it, I never really had that experience until I got to Austin, and now I can see the seed is right here, and it is ready to flourish.”

Michelle Lapides, a deaf student who has practiced yoga since she was 14, attended Beese’s fall yoga series. She said making yoga accessible to the deaf community gives them a chance to communicate and connect in a new way.

“I believe yoga can help everyone,” Lapides says, “and our community in general. Sometimes we are behind on information because of communication access. Everyone in the community needs to practice so we can better contribute to our communities. I look forward to us being able to support each other on this self-care journey.”

Before yoga was accessible for deaf people, many yogis had to attend classes for hearing people. Similar to attending a class in a different language, many of these students described they were not fully able to understand and gain the benefits of yoga at hearing classes.

Alexandria Means, a yogi who has practiced for about 10 years, said Beese’s class was the first time she practiced yoga in ASL. Being able to actually understand the purpose of her moves changed the way she viewed yoga.

“Through Beese’s classes, I learned the correct way to move and what muscles I am aiming to stretch,” Means says. “I no longer am just moving around until I feel something. All of these little details are extremely helpful.”

Before, Means said she never knew what to expect when she practiced yoga in classes for hearing people. She gave the example of not knowing about the breathing component of yoga. During Savasana, the final pose of a yoga class, she said she had no idea the act was meant to allow practitioners to let everything go, because she could never hear an instructor talk about what yoga’s purpose was about. She was not fully able to understand until now.

“I really feel like I missed a lot of minute details that are really significant in yoga,” Means says. “I did not really know I was supposed to be thinking outside of your body [during Savasana]. I was always just sort of looking around, waiting to be finished, and my mind would just race because I was hesitant on if we were done and what we were doing. During Beese’s class, I was able to let go and think and have that outer body moment and truly feel a lot more relaxed.”

Beese said one of the reasons she wanted to teach yoga was to share her experience with the deaf community. Sarah Tullier, who is new to yoga, said she never had any motivation to try it until it was accessible to her.

“I am addicted now,” Tullier said. “As a deaf person, I always thought yoga was very auditory based. When I went to Lilli’s class, and we were all of a sudden talking about form, the body movement, the terms and everything — it just became crystal clear what yoga is about and what is in the practice.”

Tullier said this kind of accessibility is important because it opens up new experiences both in the deaf community and the hearing world.

“Deaf individuals deserve equal access to yoga like hearing people,” Tullier says. “Also, hearing people now have the advantage of learning ASL while they are in class and learn a little about our culture. Every day we live in the hearing world and adapt to their culture. I think it is nice for them to come and participate in ours sometimes.”

Blake Maynard, a second year linguistics major at the University of Texas at Austin, said as a hearing person he was excited to see Practice host classes in a different language.

“I come to this studio often, and I noticed they were offering ASL yoga, and I have never done yoga in another language,” Maynard said. “I decided this would be a good opportunity to step out of my comfort zone. I have made a lot of new friends and learned a lot of new signs and how to be more attentive during class.”

Since Beese ended her fall series, she now teaches at Practice multiple days a week.

While ASL yoga accessibility is a start, Beese’s husband Nick said he knows this is just the beginning of the impact Lilli is going to make in the deaf yoga community.

“She scares me sometimes honestly,” Nick says. “She makes a lot of big, magical plans, and I have to just take a breath and hold on. Since we have been together, she has always been a big idea lady, and when she gets a big idea, she makes it happen. So, with yoga, I know that this is just the beginning, and she is going to make yoga accessible for more individuals.”