Zack Blakeney and Julia Rene are the fit couple that is taking Instagram by storm. Their killer physiques and informative coaching styles have gained them both followers and recognition in the Austin fitness community, with Blakeney placing in the best trainer and health ambassador categories in AFM’s Best Of 2020. Not to mention, both are making waves in the bodybuilding world. Rene was undefeated in her first year competing, winning Overall Figure title at Christian Guzman’s Summer Shredding Event and the Overall Wellness title at the NPC Adela Garcia Classic right here in Austin, Texas. Blakeney earned the title of Mr. Texas Classic Physique at the 2018 NPC Texas State Championships and has coached many NPC competitors to become IFBB professionals.

Now, they are collaborating their businesses and personal brands to make an even bigger impact on people’s lives through their podcast, The Fit Couple Show, and the launching of a new program, Fit4Her, designed for those overcoming binge eating disorders.

Blakeney and Rene spoke with the AFM team about their businesses, collaborations and what it’s like to be a fit couple in Austin.

AFM: So, you two met in a networking Facebook group for fitness influencers in Austin. How did the relationship evolve from networking-based to something more intimate?

BLAKENEY: It’s kind of funny actually. So, that first time we met up one-on-one to work out together, we both had more business and networking intentions behind it. Then, naturally, as we were talking about our interests and goals, it was clear this could be something more. But at the end of the workout when I asked if she wanted to do this again sometime, she told me she had a boyfriend — which I find out later wasn’t true!

RENE: The story makes me sound bad, but at the time, I was doing a lot of work on myself, and I was worried that a guy could come in and ruin it all. Plus, I realized, too, that he was the kind of guy I needed to be with. It was scary because, having been in rocky relationships before, I was scared to get my hopes up. But he stuck around, and we just really hit off.

BLAKENEY: We kept texting, and then we hung out again and talked for hours, just walking around. Finally, I asked her about it, and she admitted she didn’t have a boyfriend. Then, at the next workout with that fitness influencer’s group, I walked her to her car, and that’s when we had our first kiss. We’ve been basically inseparable ever since.

AFM: That’s a great story! So, you’ve been together about a year and half now and recently moved in together. Has the relationship itself influenced your fitness careers at all?

RENE: It did a lot for me, because I was very unsure of the route that I was going to take. Before all that I do now, I worked at a hair salon. I wanted to move into this industry so badly and I just felt so lost. In fact, that first step to me — trying to move out of my comfort zone — was joining that group that we met each other in. So, meeting him and seeing him thrive at what he does made me realize I can do this thing, too. He gave me an opportunity to meet more people in the fitness community and definitely changed how I train as well, because now I’m a competitor and he does bodybuilding coaching. So, basically, he’s also my coach!

AFM: Was it a hard transition to share a schedule with another person?

BLAKENEY: I say this a lot, but there’s no woman that I’ve ever been with that matched my ability to work — whereas Julia is a close second to me, and we’re both striving for the like purpose of helping others. She was so motivated in what she wanted to do with building her platform and her online business and then also doing contest prep. We’ve even prepped for the same show. So, pretty much, our schedules married together very easily.

AFM: With so much going on in your personal coaching platforms, podcast episodes and own competitions, is it very difficult for you both to balance work, fitness and the relationship?

RENE: Since we’re both entrepreneurs, it can get a little difficult, because we do make our own schedules, and that does blur the lines between when to start and when to stop. It can get intrusive on our personal life, because we’re constantly on social media, answering DMs [direct messages], engaging with followers and clients, all of that.

BLAKENEY: That similar level of work and passion for what we do has probably been the biggest thing, because in my previous relationship, my work was a problem. I can recognize that, yes, I was unbalanced or can be — but with Julia, I don’t feel guilty for working because we are both trying to achieve our passions. At the same time, if I step too far and work way too much, Julia is good at telling me that I need to chill. Like, if I’m working to 10 o’clock at night or on Sundays on something that can wait, she’ll come and stand by desk and just let me know I need to take a break.

RENE: And for me, too, it’s not that I need that much attention from him. It’s really more like, “Hey, you need to chill, because you need to go to sleep.” Or it’s a Sunday and you’ve worked all week, so it’s more to check in on him, because I’m worried that he might be pushing himself too hard.

RENE: It was interesting. We learned a lot about each other in a very short amount of time. We would wake up and we would go and do cardio together. We would both be on a very strict diet. So, having that support with someone doing the exact same show as you and having the exact same goal was incredible, because I had a show previous to where he wasn’t doing the prep with me, and it was a lot harder. Having someone there doing almost the exact same thing and knowing how I’m feeling — I don’t think I could have done it if it wasn’t for him being there with me.

BLAKENEY: The extra layer that we have over a normal couple is that I’m a coach. I’ve seen relationships thrive, and I’ve seen relationships be ruined by doing contest prep together. I’ve seen what pressure and stress and anxiety does to people’s behavior. That’s the moment that I think builds relationships anyways. I mean, the make-or-break isn’t it when it’s all butterflies and rainbows — it’s when the stress is on, pressure is high and how are you going to interact during those times? Just knowing that a behavior is a product of calorie restriction, being stressed out for a show and feeling like death, because that’s what it takes. It’s the extreme level of fitness.

RENE: Then, after the show, we got to actually reflect. Even though it can have a strain on a relationship, we came out better than ever.

AFM: Now, you both are working on Fit4Her, a program designed to help people heal from binge eating issues. What led you two to choosing that specific area of focus?

BLAKENEY: So, it actually came out of one of our podcast episodes on binge eating. All of the podcast episodes are on topics that we personally have dealt with in our training and life experiences. This particular episode had over 900 downloads after 30 days, while most of our episodes get around 400 after 30 days. So, it was pretty obvious that there was a need for this kind of program. Even just in the bodybuilding world, as a coach, I see people struggle with it because they have to be so restrictive in their diets, and then after a show is over, they binge — which leads to a depression about the loss of their body. So many people aren’t even aware that they have that issue. It’s not talked about enough.

RENE: Yeah, just based on the feedback from that one podcast episode, it was a huge red-flag that this was something people identified with and needed to hear more about. So, we’re designing a program that will help people deal with binge eating through meal plans, workout plans and mindset coaching.

AFM: With everything you’ve experienced and everything you know now, what advice would you give to couples who are also trying to balance a full-time career and a meaningful relationship?

BLAKENEY: A lot of what I could say would all come back to communication. No matter how hard I’m working, when Julia comes up and stands next to my computer chair, I come off of my computer chair. She sits in my lap. We appreciate each other for however long it is; it’s relative moments compared to the entire day. Plus, I truly think that giving somebody else your full presence is the greatest gift you can give. You have to communicate your misunderstandings and your insecurities, and you have to set time aside — time that won’t include work, planning or anything else — to just be with that person. 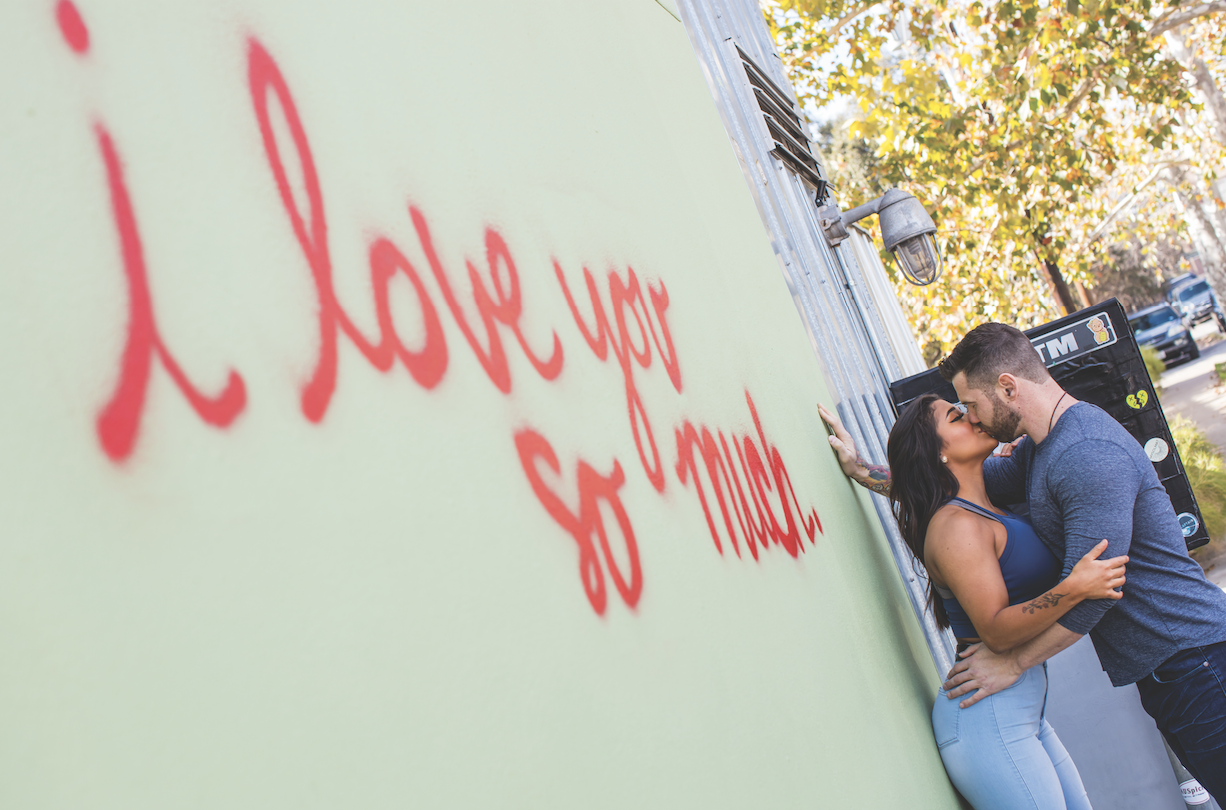 Your Smartphone vs. Your Relationship

Recipe of the Month: Prep To Your Door