Movement: The Health Secret for Seniors 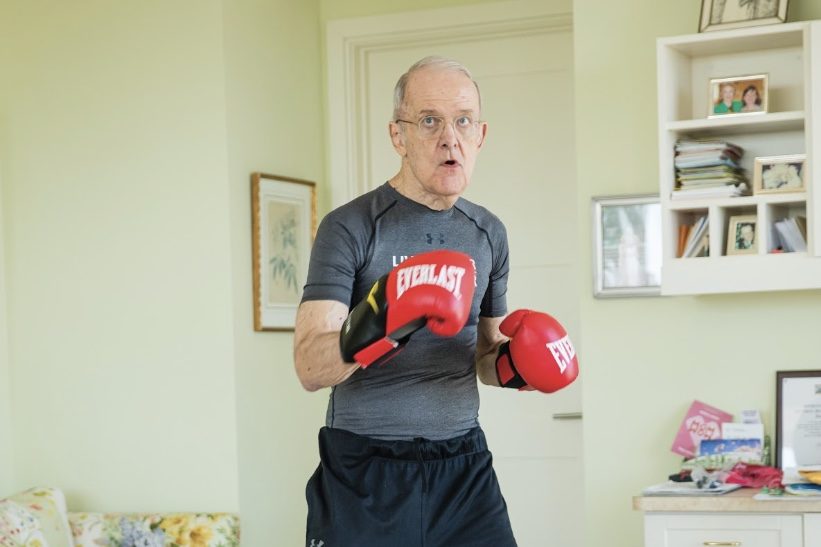 While at-home workouts have become a new normal for many, they are especially important for seniors, who are recognized as one of the most vulnerable age groups for COVID-19.

“When you have healthy habits and something comes along, that is not your fault,” says Jim Owen, a 79-year-old fitness inspiration and Austin resident.

According to the Centers for Disease Control and Prevention, eight out of ten COVID-19-related deaths reported in the United States have been among adults aged 65 years and older. However, this statistic has not stopped Owen from using this time quarantined in his home to be in the best shape of his life.

“I’m going to take advantage of this time,” Owen says. “I can’t do a whole lot, you know — socially. I can’t see my friends, I can’t go to a dinner party, to a restaurant. I can’t do any of that stuff. What I can do is sort of double down on my efforts in keeping healthy and well.”

After 35 years on Wall Street, Owen has found his passion in inspiring people to live their best lives. His newest book is entitled Just Move! A New Approach to Fitness After 50, and he has a documentary called The Art of Aging Well that is set to air in September on numerous PBS stations across the country. He and his wife were even featured on a TODAY Show segment in November of last year.

While living during an unpredictable time, Owen says he’s found that one of the things he can control is his dedication to health and fitness. He wants to do whatever he can to live as optimally as possible for the next five years.

“You can’t just sit there,” Owen says. “First of all, it leads to loneliness. Cutting off socialization altogether then leads, unfortunately, to early dementia. That’s the cause if you’re just kind of sitting there, not doing anything. All of a sudden, not just your body, but your mind sort of goes down.”

Owen says it’s easy to be upset and assume one can’t exercise due to many gyms being closed. To promote physical activity, especially now, Owen encourages people to find ways to work out that are also fun.

Since he prefers to view exercise as movement, Owen says no one needs to have a gym in order to move.

“It may be only 20 minutes,” Owen says. “It doesn’t need to be a full, 60-minute workout. That’s another trap that people fall into.”

Although it can be challenging to stay motivated and work out at home, Owen offers tips on what he calls “The Big Five.” It’s a simple exercise routine consisting of a few of Owen’s tried and true exercises that anyone can do anywhere.

“I don’t care if you’re old and 85 and you’ve never done an exercise,” Owen says. “Well, that’s not quite so easy — but you can still do something.”

Fitting in a cardio workout while stuck inside can be difficult. The fitness advocate says he and his wife of 54 years go for a brisk walk early in the morning before many people are out to get in their cardio.

“I’ve got one rule,” Owen says, “and that is never let two days go by without doing something.”

Movement doesn’t have to strictly be a workout, he says. To add in more movement to their day, Owen says he and his wife will even toss around a ball for fun.

“You’ve got to do something when you’re stuck indoors,” Owen says. “Otherwise you will gain 15 pounds, and all of the hard work that got you where you are is going to be lost.”

It can be easy to get discouraged if one doesn’t move for an extended period of time and indulges in unhealthy food. When one falls out of a regular exercise routine, it is tough to break unhealthy habits, he adds.

One of Owen’s healthy routines is journaling. Owen says he keeps a fitness journal and refrains from eating dessert. He says if he eats one cookie, it will lead to him eating three or four.

Owen says 80 percent of getting moving is in your head — one just needs to believe in himself/herself. “You have to want to do it,” Owen says. “You’ve got to feel like there’s a payoff. The payoff is you will feel so much better.”

He says everyone’s fitness goals and motivations evolve as they age. Instead of keeping up with their fitness to look good in a bathing suit, Owen says older people strive to stay healthy because their goal is to improve their quality of life.

“I want my wife and I to have as high quality of life as possible,” Owen says. “Now, we may get cancer tomorrow, we may get Alzheimer’s tomorrow, but we’ve done everything we can do in terms of what we put in our mouth, exercises, socialization.”

Even though exercising and eating healthy do help with longevity, Owen says he practices this type of lifestyle because he wants to live optimally.

“If we got five years left, I want it to be the best five years it could possibly be,” Owen says.

As someone who wants to live as well as possible, Owen says he can’t spend his time being sedentary.

“I’m in the best shape of my life but only because I want to take control of my future,” Owen says.

Why: This move builds balance and flexibility, Owen says. Having a strong core for balance is crucial, because one out of four people, 65 and older, fall every year, according to the Centers for Disease Control and Prevention.

Why: This will improve lower-body strength, Owen says. If you are unable to squat without support, Owen recommends putting your hand on a chair to help you.

Why: It doesn’t matter if it’s a side lunge, forward lunge, backward lunge — do whatever you are capable of doing. The fitness advocate says everybody needs to do some kind of a lunge since it’s great for glutes and can be made as sophisticated as desired.

Why: You can do these from your toes, knees or off of a Swiss ball –– any variation will work, Owen says. According to Owen, there is no better total-body exercise than a push up. There are hundreds of variations, and although he doesn’t do it, Owen says if you want to get fancy, you can do a handstand push up.

“A gentleman doesn’t talk about his wife’s age, but she’ll be 80 in November of this year,” Owen says. “She can actually do a push up. She does it on her knees, and she’s so proud of herself. I say, ‘Oh my gosh, look at this girl at her age, doing a push up.’”

Why: Even though this move can be challenging to do from home without a machine, Owen suggests using a stack of books or any object that is at least 10 pounds to supplement and imitate a lat pulldown.

The Mind of a Climber