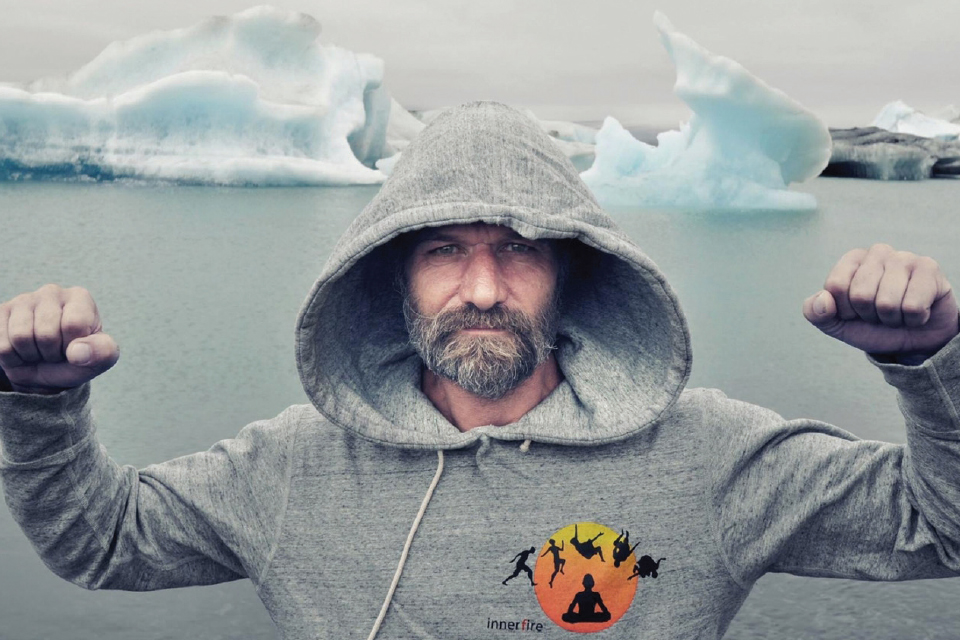 He climbed Mount Everest in nothing more than shorts, ran a full marathon in an African desert without water, and set the world record for the longest ice bath—clocking in at nearly two hours (just one of his 20 world records). While some claim he’s simply supernatural, Wim Hof credits his feats to his namesake method, in which breathing techniques and cold immersion are combined to control the mind. Following the suicide of his wife, Hof began looking for an outlet for his grief. What he created is now a 10-week course that people all over the world are employing to create balance, reduce stress, and strengthen the immune system.

The Wim Hof Method focuses on a cycle of deep breathing and cold water immersion. Through rounds of breathing, the body is able to produce noradrenaline and norepinephrine, hormones that have healing agents and can reduce bodily inflammation. The secretion of these hormones in turn affects internal pH levels, and can lead to an alkaline state, in which your body eliminates excess acid and enters a healthier capacity. More, the shock of the cold-water jumpstarts the metabolism, increasing metabolic rate and can lead to fat loss. Yet most shocking, is the method’s ability to allow your mind to actually influence your immune system. Tested by skeptical scientists in 2011, Hof was injected with bacteria, commonly known for causing fever, chills, and headaches. By pumping out adrenaline, Hof was able to suppress his immune system and control his autonomic nervous system, ridding his body of the bacteria. Still unsure, a group of method practitioners were also injected with the bacteria. All yielded the same results.

More than physical health benefits, those who practice the Wim Hof Method experience boosts in their mental health. The deep breathing allows the mind to escape the stressed “fight or flight” mentality and enter a place of resting in the parasympathetic mind. The intensity of the cold water clears a person’s head and permits a break from the chaos of everyday life. The science of cold therapy has even made its way into the treatment of depression. Because of depression’s connection to hormones, cold immersion and deep breathing provide the quickest way, other than drugs, to alter those hormones. Similarly, Hof promises mood improvement and increased energy levels as additional benefits.

Jeremy Thiel, owner of CrossFit Central, is a walking testimonial of Hof’s method and has worked to bring it to the Austin area. Before starting, Thiel struggled with paranoia, anxiety, and fear; he never felt present, and his mind was constantly racing. Through the use of the Wim Hof Method, he was able to slow down and take time to better engage with those around him. Never successful with meditation, the breathing cycles allow him that peace, silencing his mind and giving him the ability to be present in the moment. He also claims it has led him into a state of heightened awareness and spirituality.

“I have a much higher connection to what I would consider my god, and that leads into better intuition and better understanding,” he said. He practices one to three times a week. Seeing success in his own efforts, he now offers the Wim Hof Method to others. Members of his boot camp do it twice a week after class, and he has a handful of clients who come in on their own.

According to Thiel, 68 degrees is the perfect temperature to get the right response. And while he typically uses ice baths and cold showers, Barton Springs is a perfect, natural bath for people who want to test the waters—literally.

“If you spend 15 to 20 minutes in Barton Springs, you will see positive adaptation in your hormonal response that will cause decrease of inflammation,” he said. This practice is especially effective for post-workout recovery, as the cold water causes your body to buffer the built-up acid in your muscles and oxygenate them faster.

Physical, mental and aesthetic—the benefits of the Wim Hof Method are endless. Plus, with the Texas heat and Barton Springs so close, you have no excuse not to give it a try.

Keep reading to learn about the Wim Hof Method!

1. Get comfortable. Many people sit in a meditation position, others will stretch while breathing.

2. Thirty power breaths. These are deep breaths and should be audible in short, but powerful, bursts.

3. After 30 breaths, hold your air in on your final inhale. When you need to breathe, release the air slowly and hold again until your gasp reflex forces you to breathe.

4. For your recovery breaths, inhale to full capacity and feel your chest expanding. When you are at full capacity, hold the breath for around 10 seconds and this will be round one. Repeat the full cycle of breathing exercises for three more rounds one after another.

5. When you’ve finished the breathing cycles, take a few minutes to relax before you make the transition to cold water. If you’re just starting out, get your body adjusted with cold showers, beginning with your feet and making your way up to legs, stomach, shoulders, neck, and back. Start with moderately cold water, and each day you practice, make the temperature colder and colder. Hyperventilation is normal, but be sure you have a friend or family member in the vicinity in case you react negatively (passing out).
For those wanting to do cold water treatments in a tub, fill with ice and submerge up to your shoulders and sit for one minute.