The Austin Crows unite culture, physical achievement and community in the ultimate sport.

Texans pride themselves on their reputation of having country roots and resilient grit. Yet, with the exception of phenomenal BBQ, two-stepping and American football, Austin is one city in Texas where cowboys and roping cattle seem like folklore.

However, Austinites remain true to their Texan tough caliber, especially the Austin Crows.

“It’s just nothing I’ve ever experienced before in my life,” says Sam Gigliotti, a native Austinite and team member of the Austin Crows, an American-Australian football team in Austin.

Composed of 18 people on the field at once — nine Americans and nine Australians — Australian football (otherwise known as “footy”) brings a whole new meaning to the word “tough.” 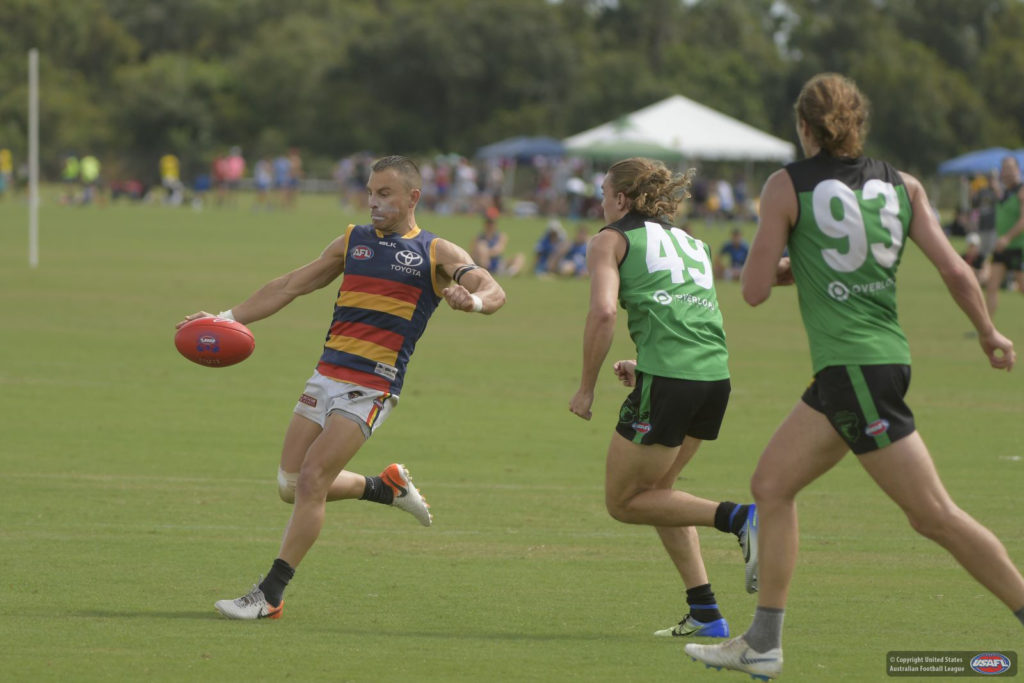 “It takes into account your endurance, then it has the finesse of soccer where you have to kick a ball from a long distance away and put it right on the money,” describes Gigliotti. “And then, it’s got the physicality of rugby or American football. Combine the athletics with the size of the field, and I think it is the most athletic sport you can play.”

Described by many players simply as a combination of rugby, soccer and American football, footy is much more complex.

James Bates, Australian team member on the Austin Crows who began footy at the age of six, says the basic goal of the game is to advance the ball up the field and into one of the two different goalposts.

Compared to American football, footy can be played on a field almost twice the size of an American football field. Played with a ball similar to that of rugby, the player can pass the ball by kicking it like an NFL punt or handling it, which is executed by punching the ball with your fist.

The player with the ball can be tackled from any direction at any time. The game is a full-contact sport played without pads or helmets for protection. Because of this, Bates says, Australian football is more physical than American football.

The Austin Crows Australian Rules Football Club was established in 2002 and quickly grew its presence in Austin and the AFL community in the states. Composed largely of Australians and Americans, the team has won five D1 National Championship titles since its founding.

For many of the Australians on the team, footy is a way to reconnect with their culture and is one thing Stefan Barr, Australian player and coach of the Austin Crows, says keeps many Australians in Austin.

Barr grew up in a small coastal town in Australia. Like many small towns in Texas centered around high school football, back home in Australia, he says, footy is the heart and soul of these small communities.

“Being in Austin, it’s something special to be able to go to Zilker on Tuesday night and kick the football around just like you would back in [Australia] after a long day of work,” Barr says. “Austin, being a city where a lot of people are moving to, it’s not all about just playing a game. It’s also everything else that comes with it.”

Including Tuesday and Thursday night practices at Zilker Park, the Austin Crows are not just about winning national championships and footy — many players have received job opportunities and become lifelong friends from the team.

Gigliotti says the team dynamic is unique in the way players from different cultures interact, which does not exist in the same way in other sports in Austin.

“The community is kind of what a lot of guys sign up for,” says Gigliotti. “It is really interesting, too. Australians like to talk trash to each other in a way that kind of builds the relationship. It is all in good fun, of course, and it just brings the camaraderie to a whole new level.”

Dianna Sosa, one of the founders of the women’s footy league in Austin, says since playing footy, one thing that has impacted her life is the community not just in Texas but around the world.

“Having a group of people to hold you accountable, not just for the sport but in life, to stay active and make the right decisions for yourself,” Sosa says. “It’s always nice to find such a cohesive community of women, not just in Texas, but all over the country. It’s really this unifying effort I love to see and be a part of.”

Sosa was first introduced to footy while playing on her roller derby team in Austin and scrolling on social media where she found a post about the women’s Houston team and a clinic they were hosting in Austin.

After attending the clinic, Sosa and Heather Serpico, who played on a women’s team when she lived in New York, began recruiting for a women’s league in Austin.

With a core group of five girls, the women’s Crows currently play with the Houston women’s team. Sosa is hopeful to soon have 10 regulars in Austin to combine with 10 from the Houston team in order to have a more full roster for the national tournament.

While playing with women from all over the country is empowering, Sosa also says it can be challenging at times.

“There is most definitely camaraderie, and social media makes the world a much smaller place in a great way, but at the same time, we don’t have the advantage of learning how your partners work on the field,” Sosa says. “Building a team that is able to trust each other on the field takes a bit of time.”

Despite the barrier of learning about each other on the field, each woman brings her unique set of skills to the game, and it shows in the way they play. Barr says compared to men’s footy, the women’s game is far more organic and natural.

“The women are just fearless,” Barr says. “The way they attack the ball and throw their bodies into the ball and contest is certainly impressive.”

Sosa believes the way women play and the empowering community she has experienced is unique to women’s sports and the reason women playing footy is a big deal.

“We are not just playing for ourselves,” Sosa says, “but for every little girl who’s ever wanted to play football. We play and it’s fun and we get a lot out of it, but it sets the stage and it changes minds and it makes people have conversations about women occupying new spaces that I think is bigger than just anything that we do.”