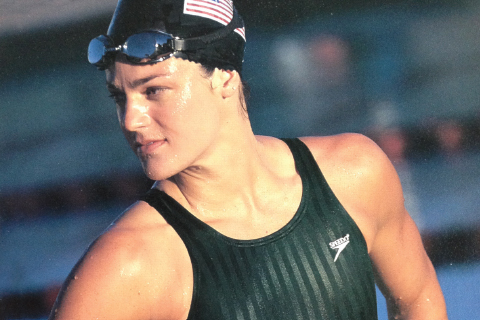 I have always liked to compete. I can’t remember a time when I didn’t want to be the first one to finish whatever the task at hand. As I have aged, I’ve found that I enjoy the camaraderie and the friendships a lot more and the competitions a lot less. These days, my favorite competition is to see who can mow the yard the fastest. But for nearly 12 years, I competed at the highest level the sport of swimming has to offer. While I relished being in that kind of shape, I don’t miss the pressure of having to be that good. Now, I enjoy being a spectator, cheerleader, and a recreational athlete. I feel very content and happy with where I am in my life and it took me awhile to learn competition doesn’t have to be a part of it. It is the journey to this realization that has been so important and memorable and has shaped the person I am today.

My first memory of wanting to be an Olympian was in kindergarten. The 1976 Olympics were on TV and I watched them with my parents. On the first day of school, my kindergarten teacher asked me what I wanted to be when I grew up. “An Olympian,” I replied. I started swimming that same year with my older sister. I was not a great swimmer (or even a good swimmer) but I worked hard, listened well, and—most importantly—I dreamed BIG.

When I went to my first Olympic Trials at age 13, I was the youngest one there and I absorbed everything around me. I watched how the best swimmers in the world warmed up, raced, and prepared for the meet. It was the best learning experience of my life. I also realized that these were normal people who possessed an extraordinary gift.

Over the next four years, I worked hard and set high goals for myself and in 1998, I made the Olympic team in the 200 individual medley. I remember it vividly; the Olympic Trials were held here in Austin, Texas, and I swam in lane eight at the Lee and Joe Jamail Texas Swim Center. This was the beginning of my love for the University of Texas (UT) and the Austin area. I went on to the Olympics in Seoul, Korea, at age 17. While my goal had always been to be an Olympian, I hadn’t dreamed of being an Olympian who’d won a medal so, once I got to the Olympics, I was at a loss. I placed eighth and came home unsatisfied.

In 1989, I was a senior in high school with “Olympian” on my resume and my pick of college scholarships. I chose the college that I thought would best prepare me to make another Olympic team and win a medal. Choosing UT, home of so many great swimmers, was an easy choice. I loved the team atmosphere and all the opportunities UT had to offer. Unfortunately, I didn’t have the results I’d desired; I placed third in two events at the next Olympic Trials in 1992, and only two people per event qualify for the Olympic Team. I’d gone from being ranked in the top five in the world in numerous events to failing to make the US Olympic Team.

This turned out to be a great life lesson on how to deal with failure. No matter how successful or unsuccessful I was, my parents and my true friends still loved me. I realized I didn’t need an Olympic medal to define me. It seems I had put too much pressure on myself and swimming had become more of a job and less of something fun I enjoyed doing. I had lost perspective.

I graduated from UT in 1994 a 27-time All-American with a degree in education and I got my first job teaching sixth grade language arts. Midway through that first year, I got the itch to swim again. I felt like I had more I wanted to accomplish. I didn’t want to have any regrets. What did I have to lose? I had made it to the Olympics once and missed it twice, so I knew I would be okay either way. I called up Jill Sterkel, legendary women’s swim coach at UT, and asked if a post-graduate could train with the college team. She agreed to let me give it a try.

I went on to make the 1996 Olympic Team and win three medals: a gold in the 400 medley relay, a silver in the 100 back, and a silver in the 200 back. My journey from that little kindergartner to Olympic medalist was a wonderful rollercoaster ride with lots of ups and downs. It has shaped me into the mom, wife, friend, sister, daughter, coach, and person I am today. I try to help my children and the people I coach to set goals and most importantly dream BIG! Nothing is too high, too fast, or too big if you believe in yourself!

Whitney’s Five Strategies to Live By:

1. DEFINE YOUR GOAL.
The quest for success always begins with a target. Too many people wander through life like sleepwalkers. They follow familiar routines and never ask, “What am I doing with my life?” They don’t know what they’re doing because they lack goals. Setting goals is focusing the will to move in a certain direction. Begin with a clear concept of what you want. Write down your goals and date them because putting them into words clarifies them. Focus on fulfilling your desires to do, to produce, to contribute.

2. SEEK OUT THOSE WHO KNOW MORE.
Whatever your goals, plan to network with those who know more than you. Model your efforts on theirs, adjusting and improving as you go.

3. PURSUE YOUR VISION WITH STUBBORN CONSISTENCY.
The biggest difference between people who succeed and those who don’t is usually not talent but persistence.

4. MAKE AN EMOTIONAL COMMITMENT.
It is difficult to pursue a dream without deep commitment. Great success requires risk, whether financial, social, or physical.

5. REVIEW AND RENEW YOUR GOALS.
Reread your list of goals now and then. If you decide one should be adjusted or replaced with a better one, make corrections. And when you have achieved your goal or made a big step toward it,


Whitney Hedgepeth, a two-time Olympian, seven-time National Champion, and former American Record Holder (200-yard backstroke), currently oversees more than 150 Masters’ level swimmers here in Austin at Longhorn Aquatics. She has been the head age group coach (’96-’99) and head National coach (’99-’01) and, from 2001-2004, she began coaching the Masters group. Hedgepeth has been the head Masters coach at Longhorn Aquatics since 2004, working with swimmers of all abilities, from newbies to former Olympic swimmers to professional triathletes.