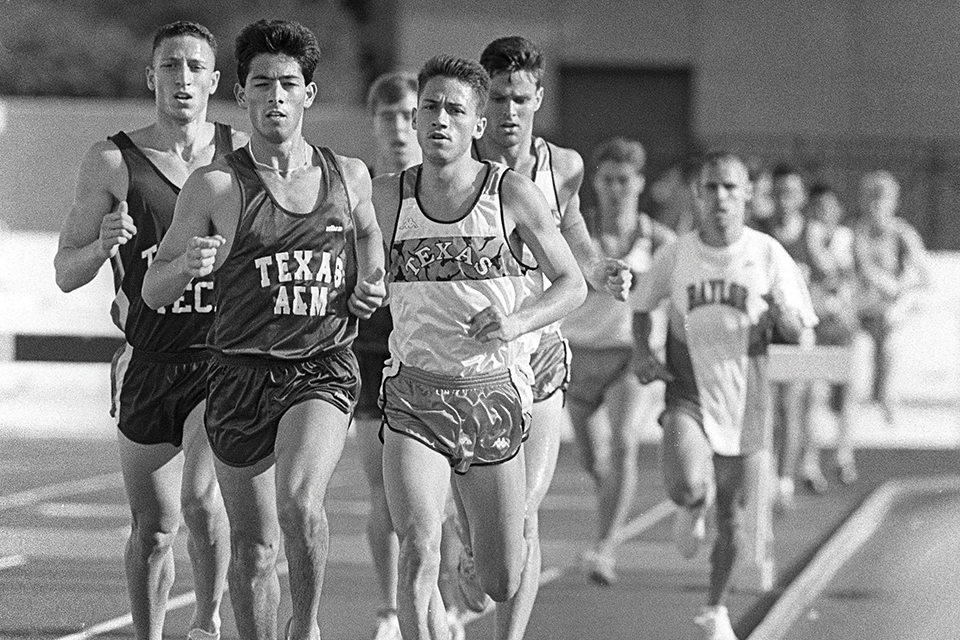 I was lying on my back in the middle of the infield of The University of Texas’ Memorial Stadium praying for mercy. I believe my exact words were a bastardization of Jesus’ plea from the Gospel of Luke: “God, please take this cup from me.” While his concern was the horror of being nailed to a tree, mine was a little less dramatic. Of course, it didn’t feel that way at the time.

The occasion was the Southwest Conference Outdoor Track and Field Championships in May of 1993. I was a senior at UT completing my final season of eligibility. I was on a roll and racing very well that season. However, here I was dreading the slate of racing I had in front of me. While not as painful as crucifixion, 18,000 meters in three races over 24 hours was still a daunting task. Especially considering the three races were the longest events on the track: the 10,000 meters, the 3,000-meter steeplechase, and the 5,000 meters. Did I mention that the 3,000-meter steeplechase was run over 28 heavy, 36-inch high, immovable barriers and an additional seven barriers with a 12-foot-long pit of water that must be forded? Not your average day at the office. And the championship was on the line. In order for our team to win the conference championship, I had to win these three races.

That, however, wasn’t the reason for my anguish. I was begging for mercy because I was petrified of losing; I was mortified that I would disappoint myself, my team, my family and in the process, the whole damn world would know I was a fraud. In that moment, I was so out of sorts that I wanted to run right off the track, out the gates of the stadium, and into the night to any place other than where I was—on that infield, staring up into the night sky, petrified by expectations.

I’ll never forget that moment and those feelings for as long as I live. This wasn’t a simple case of the nerves; it was an existential crisis. I was questioning the very foundations of my life, wondering whether there was any point to all of human existence. How did I get this point? Competition.

We live in a society where winning is equated with success and losing with failure. This competitive drive is impressed upon us at a very young age and most of our upbringing is focused on developing the skill sets necessary for competing. Our educational system rewards only the highest marks; our job markets are looking for only the best and the brightest. Our lives become a chase for an elusive win. And when we do win, we find that the experience fades very quickly and we’re confronted with getting back in the game, this time with a target on our backs. In this environment, many people feel overwhelmed, destined to fail. But few realize that there is a way out. It requires a very simple reframing of the circumstance in which we find ourselves.

That was what I realized lying in the soft grass infield that mid-May. It came like an electric short to my brain, a fizzle, then a spark: “This IS just about me! It’s not life and death; it’s a game and I want to play.”

Competition is not about winning or losing, gold medals or broken dreams, six-figure contracts or expensive entry fees. Competition is a crucible, a fire that has the ability to burn us up or to burn off our impurities. That difference—existential crisis vs. self-realization—was the crossroads where I found myself that evening. I realized this race experience I’d been training toward for over 15 years was an opportunity, not a requirement. This precipice I saw as an end was a beginning. I only had to be myself, authentically Steve Sisson, and approach this challenge with my best efforts. That is what the moment demanded.

Where the spark of recognition came from, I can’t name, but I can say that the asking, the prayer of mercy to release me from the suffering, precipitated the clarity. By asking the question of purpose in a dramatic and difficult emotional situation, pressure transmuted to passion; asking transformed three races for glory or defeat into a dance in three acts where the process was as crucial as the result.

Oh, and by the way, I had a very successful meet, placing second in the 10K and winning both the steeplechase and the 5K, scoring 28 points in the process. The Longhorns won the title by only four points.


Steve Sisson is The University of Texas’ assistant coach for women’s track and field/cross country. He is also the head coach of Rogue Athletic Club, a non-profit post-collegiate development group based in Austin, Texas. As a collegiate student/athlete, Sisson represented the United States internationally in IAAF’s World Half-Marathon Championship and Ekiden Relay. Sisson is also a three-time Southwest Conference individual champion as well as three-time All-American, and his time of 13.50 (’93) set the Longhorn indoor 5000m record for 10 years. In addition to coaching, Sisson is the owner of Rogue Training Systems here in Austin.