This Social Circus Helps Austin Youth Rise to Their Potential

For the past 17 years, Callie Brown has struggled with anxiety. On top of that, she was diagnosed with autism early this year, making it sometimes a challenge for her to do daily activities. But when she’s flying in the air, none of that matters.

Brown is one of the many teens who is involved in, and now volunteers at, Uprise Circus — a local social circus nonprofit that aims to help underserved youth in Austin through the flying trapeze. The communities of youth they reach range from those in foster care to teens in the midst of a gender identity crisis to children who struggle with anxiety — anyone who needs support or comes from a disadvantaged environment.

Liz Taylor, vice president and executive director at Uprise, says though the nonprofit aids in physical development, its main mission is to facilitate social opportunities and personal growth.

“After a few weeks with us, kids who maybe came in their first day and sort of looked at the ground or feet and wouldn’t say anything (are) cheering, smiling and willing to try things,” Taylor says.

Taylor, along with other current staff members, was once involved with Circus of Hope, a social circus that was active from 2013 to 2018. This organization provided both public sessions and youth outreach but eventually dissolved due to financial instability. In 2018, Uprise was born out of the remnants of Circus of Hope and now solely focuses on outreach, save for the occasional privately-booked session that helps fund their outreach program.

Though Uprise doesn’t have a physical studio or building, Taylor and her team worked to build a rig that’s 110 feet long and 32 feet high, which houses their flying trapeze that is located in far southwest Austin.

Brown is one of the students who has been attending Uprise for the past year or so. She used to do gymnastics, so the trapeze came fairly naturally to her. When Circus of Hope was active, Brown used to fly there but later joined Uprise when Taylor invited her to be a part of it.

As someone who struggles with anxiety, Brown says she needs a place where she can escape and just enjoy the present moment.

“With anxiety, there are a lot of fears,” Brown says. “Sometimes you just want to get out of that world and go somewhere where you can just block out all that and do something you enjoy rather than having to worry.”

However, after a few hours at Uprise, Brown’s mother Meg says she’s a whole new person.

“She’s a different person when she finishes,” Meg says. “When we pick her up, she’s full of joy.”

Past literature and research suggest that circus arts and education improve not only the physical development of children but also their psychological development. A thesis published in 2003 discusses how providing a community circus model can empower youth, especially those at risk, through scholastic, physical, psychological, sociological and mental benefits.

One community this nonprofit serves is children in foster care. Dr. Juliette “Jules” Madrigal, president of Uprise, has fostered at least 17 children herself since first becoming involved in foster care when Circus of Hope was active. From her own experience, she notices how Uprise and the flying trapeze can fulfill developmental experiences for children in vulnerable situations, such as the foster system.

“It’s hard for foster kids to do sports because they never know where they’re going to be from one day to the next, so they don’t get to join teams a lot of times,” Madrigal says. “The equipment is (also) really hard to come by, and with trapeze, you don’t have to worry about any of that.”

Sixteen-year-old Adam is one of the many children at Uprise who is in the foster care system. His foster mother found Uprise for him to try out, and he’s been attending for the past few months. Adam, who has previously practiced with aerial silks, quickly learned the trapeze and has been pleasantly surprised by how Uprise has helped him. 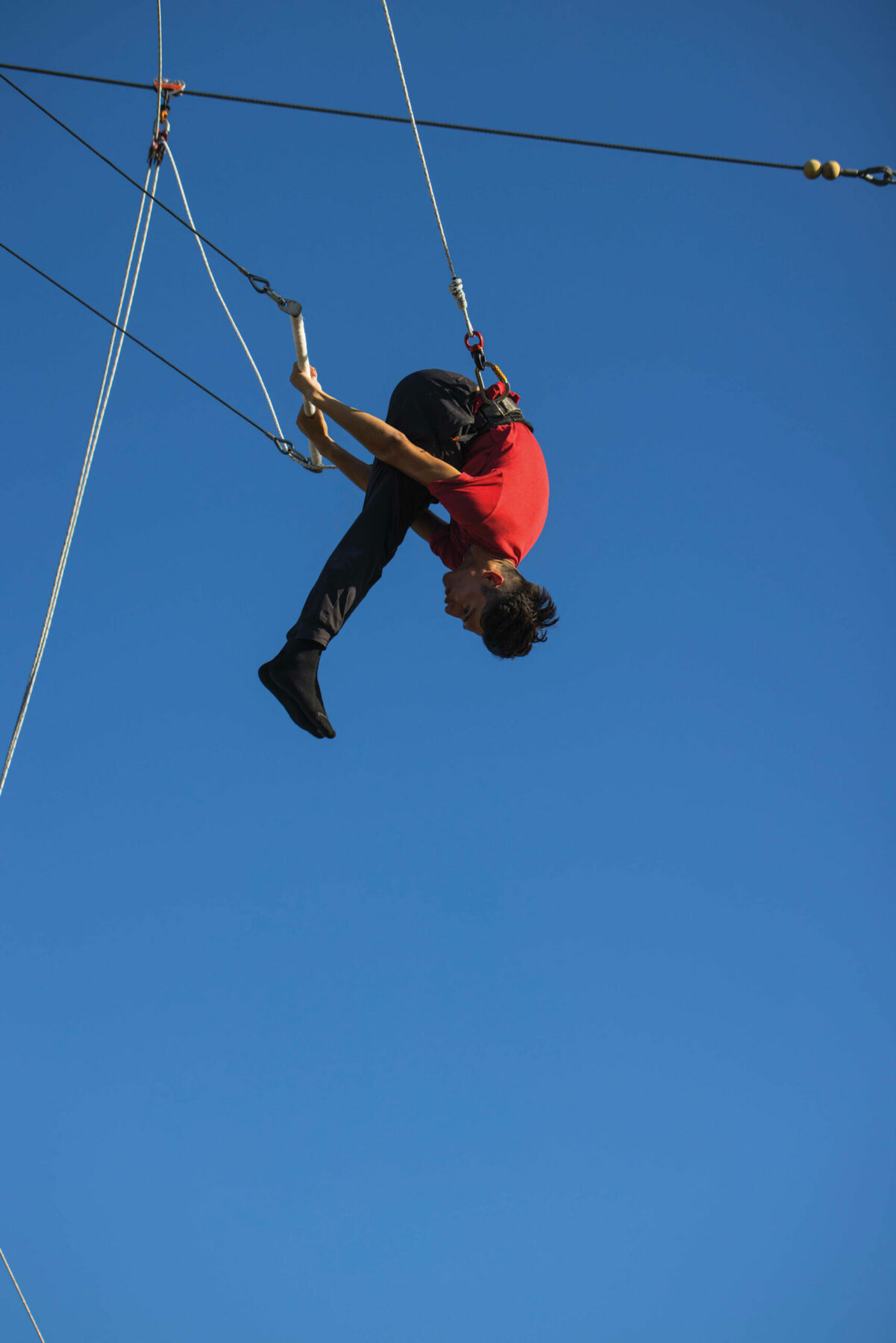 “I don’t think anyone in the foster system would expect to be doing such a thing, so I was a bit surprised and excited in the first place,” Adam says. “I, personally, am sort of a quiet guy or laid back, and (at Uprise), you have to be talkative and trust (others) or else you probably wouldn’t be able to catch (your tricks).”

The Uprise outreach program is held on Sundays for about two hours in which children from different backgrounds will gather together. At the beginning of the class, the staff leads them through a social circus game to help them get comfortable with one another. After this, they take turns flying on the trapeze to practice their tricks. Taylor says the main point of this activity is to provide a safe space for them to fail as well as encourage community support from their peers.

“Whether you’re a kid or an adult, it’s hard. Almost every day, somebody ends up crying,” Taylor says. “It’s a lot of emotions doing something that’s scary and difficult.”

At the end of each class, whoever is leading will start shoutouts in which they recognize someone in the class and what they accomplished. Then, the students will take turns doing that for one another. Taylor says it’s rewarding to see the children overcome their personal challenges, especially if they’re not adept at trapeze.

“Some kids come in and they’re kind of athletic; it’s not as hard for them,” Taylor says. “Personally, I wasn’t athletic and I was always the last to learn things. So those kids who come in, struggle, fight and finally achieve what they want, that’s the most rewarding for me.”

Taylor says the staff gathers feedback and surveys from the students that oftentimes show how the lessons and skills they’re learning at Uprise bleed into other spheres of life. For instance, Adam says the skills he’s learned at Uprise have helped him gain more confidence in his ability to do other things, such as schoolwork.

But Uprise doesn’t just operate on the achievements of students or the work ethic of their staff; they have 20 volunteers who take time out of their days to learn how to best serve these youths and put that education to work. Most of the volunteers are adults but a few are students like Brown.

On Wednesday evenings, volunteers gather to receive an educational lesson, oftentimes on topics about how to care for children in specific situations (i.e. how you can support children who are having a panic attack). The second half of the night consists of roleplay on the rig, so volunteers can practice different positions for the trapeze.

Uprise operates on a 6-week program series schedule, typically doing a series in the fall and spring. This year, however, they received a grant, allowing them to have their first-ever summer series program. With this new schedule for the summer, they shaped the series to be more of a drop-in program, with eight Sundays being open for attendance and the dates in between for hosting newcomers. Though the program is six weeks long, many of the students return several times as it’s free of charge.

Though some students get connected to Uprise through word-of-mouth, they are oftentimes connected through their schools or other nonprofits and organizations. Students are then encouraged to apply and can later try out the trapeze to see if it’s a good fit for them.

One challenge for Uprise, however, is finding the transportation to get children to the rig. For some, like Adam, the commute is about 45 minutes. Taylor says especially with the population they serve, it’s a struggle to find a way to consistently bring children to Uprise.

“We can only make this much impact in two hours,” Taylor says. “But if we can get up to two hours for six weeks, we really see them flourish.”

Ultimately, the progress that’s made at Uprise is one that seems to carry beyond the rig and into these students’ everyday lives. Adam says being involved at Uprise provides a space for him to release his emotions.

“It’s another form of having an outlet for my emotions; I channel what I think or feel into my craft,” Adam says. “(…) It helps you get a bigger picture of yourself and what you can actually accomplish.”

Note: Adam’s name has been changed to protect his identity.

An Animal-Themed Workout For Kids