Before 1994, it was thought that the significant drop in strength, stamina and flexibility after age 55 was inevitable. But after a study by Harvard and Tufts, researchers found that many of those losses could be reversed through consistent exercise and activity. Individuals in the study were able to climb up more stairs and lift more before tiring by the end of the trial. While it’s still true that aging takes its toll on the body and that each body ages differently, it’s also important to know that age doesn’t have to define the physical fitness and activity of an individual.

Meet Jerry Rothouse. He’s 76 years old, but from a fitness perspective, he has the physical abilities that many would say are of someone much younger. However, through his blog Sweating Seniors, he’s on a mission to inspire others to believe that these abilities don’t have to be considered aspects of only the young.

His intrigue with fitness dates back to the age of 13 when he and his father, Abraham Rothouse, took a trip to their local swimming pool on a hot day. Seeing the older, high school athletes and college-aged pool-goers there, he told his father that he, too, wanted to have abs that he could show off. Endearing as that goal sounds for a little boy to have, his father responded that day by giving him his first fitness lesson.

“He told me that it doesn’t happen just because you want it to,” Rothouse recalls. “You have to work at it continually.”

Back then, his drive toward fitness came from an aesthetic point of view, but things quickly evolved as he got older. In 1963, at age 19, Rothouse not only enlisted in the United States Army but also endured the mentally and physically strenuous training it takes to become a paratrooper.

“The drill sergeants told us that they were going to do everything in their power to get us to quit,” Rothouse says. “Out of the 725 guys that started out, only 275 of us graduated.”

It was then that Rothouse realized the key philosophy that he lives by, even today.

“We have more ability within us than we’re consciously aware of.”

This translates into his life now as he spends every day performing some sort of physical activity. Every morning, it’s a 30-minute wake-up routine with a run or walk to get the blood pumping and lungs expanding. Then, in the afternoons, his activity varies between upper body, swimming, hill sprints and more. Finally, to top it all off, in the evenings, he can often be found in a nearby parking garage doing his favorite activity — skateboarding.

Rothouse attributes much of his physical health to the amount of cardio he is able to work into his routine. It helps his energy levels, which, in turn, helps him to keep up the momentum to do those extra activities.

The decision to start Sweating Seniors came from a friend of Rothouse’s in the wellness industry who pointed out to Rothouse that he was an unusual example of someone his age. Not only did he have a deep passion for his own health, but he was actively learning the technical sides of fitness and striving to improve himself. She told him that he could provide some guidance and inspiration to seniors who were interested in getting in shape themselves.

“The mission is simple,” Rothouse says. “By setting an example, I hope to cause people to think about what’s possible in their own lives.”

Studies have found that regular exercise and consistent movement can help older individuals, whether they are very healthy for their age or frail. The activity helps keep joints functional and reduces the risks of chronic illnesses, metabolic diseases, osteoporosis, cognitive impairments and more. In fact, one study called physical activity a medicine for older adults. But each body ages differently, so the standard of fitness varies from person to person. Consistent exercise can be difficult to achieve since life often becomes more sedentary as one’s years on Earth add up.

Rothouse might make it look easy, but he speaks of his own struggles with his “sedentary inertia.” Those days without motivation to get out and do something are much more common with age, he says, and inertia becomes the biggest obstacle.

“As time goes by, that internal spring of energy does not self-wind,” Rothouse says. “We must wind it up ourselves.”

He says that part of his motivation is knowing what may happen to his body if he stops. Although he knows that no one can live forever, his biggest worry is losing the ability to do the things he loves.

“It just never made sense to me to accept that as I aged my body would deteriorate, and I would no longer be able to do what I like,” Rothouse says.

But even as he skateboards, runs upstairs two steps at a time, swims laps and surfs when he can, Rothouse acknowledges that it’s still not like it used to be.

“All of these activities are done less frequently and for shorter durations as I’ve aged,” Rothouse says. “That’s the big trade-off.”

But while the main audience may be the older generations, Rothouse says that Sweating Seniors is meant to inspire those both young and old to take on the challenge of physical fitness sooner rather than later by prioritizing their own personal health.

“It’s a reminder that someday the young ones will be senior citizens themselves, and what they do now builds the foundation for those senior years,” Rothouse says. “Don’t wait — start now.” 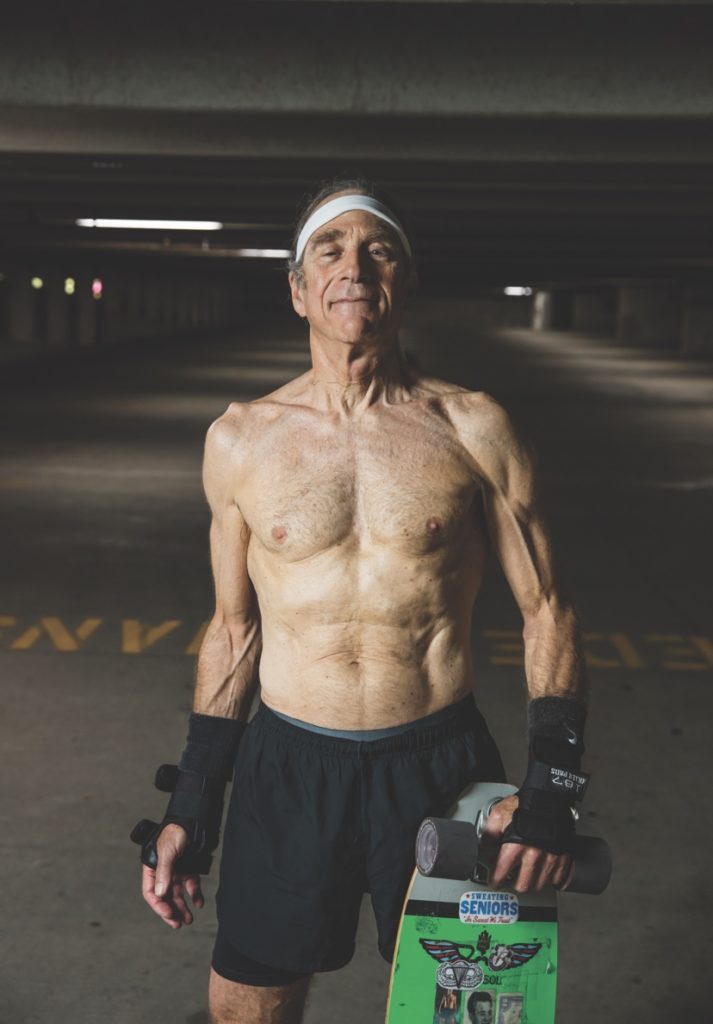