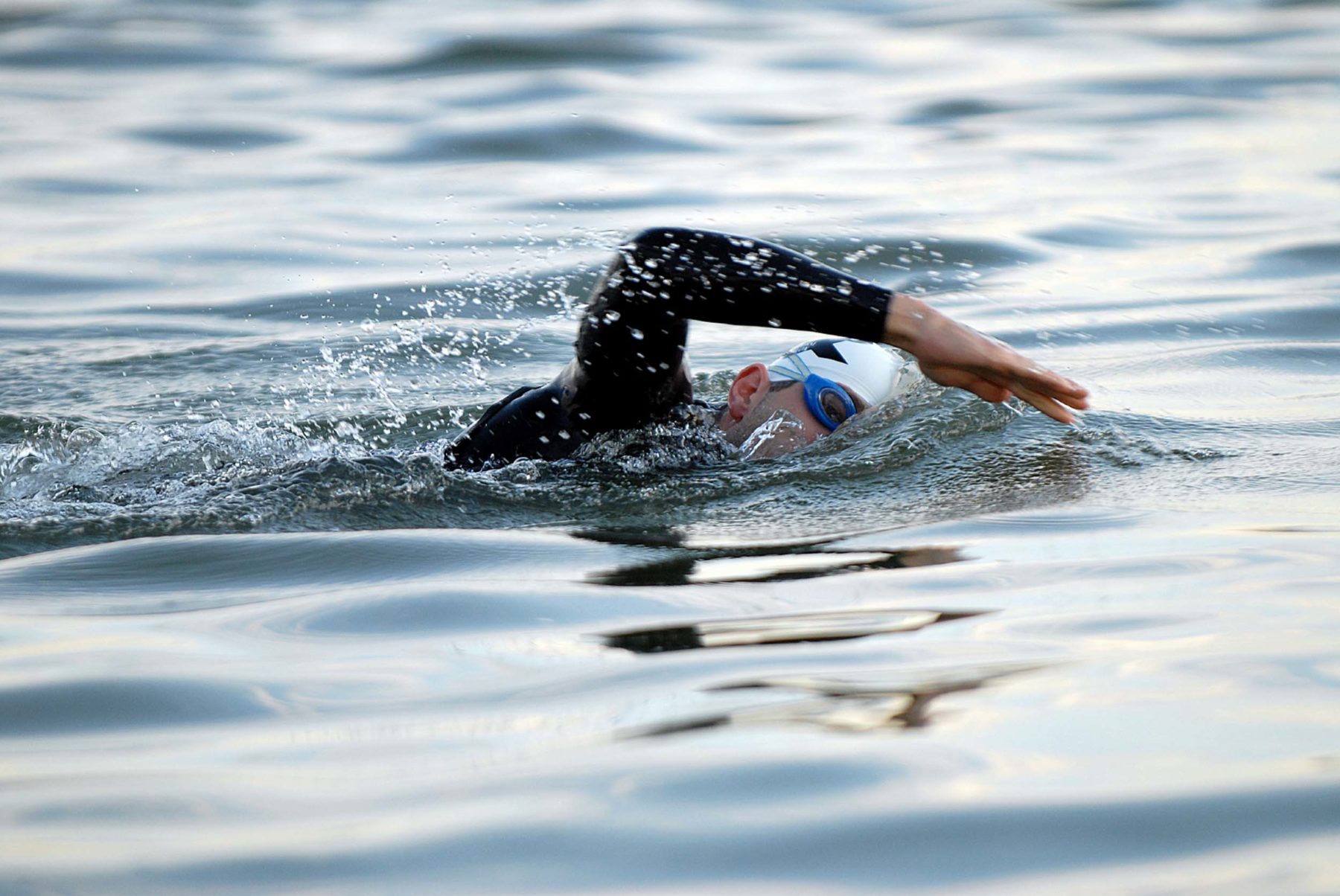 In the open water swimming world, Lynne Cox is indisputably one of the sport’s greatest. Known for her record-setting feats in water temperatures in which most humans couldn’t survive—let alone swim—there are few people more qualified than Cox to take on the daunting task of writing a user’s manual for the sport. There are fewer still who could do such a task well, weaving seemingly mundane details into a page-turner. And yet, somehow, Cox—who is also well known for her autobiographical adventure tales (see Swimming to Antarctica and Grayson)—has managed to do exactly that in her new book, Open Water Swimming Manual: An Expert’s Survival Guide for Triathletes and Open Water Swimmers. At just over 300 pages, Cox’s technical opus is jam packed with information that swimmers of all levels should find helpful (and even interesting), whether newbie triathlete or seasoned marathon swimmer.

The sport of open water swimming has exploded over the last several years, thanks in no small part, said Cox, to the growing popularity of triathlon and its inclusion—along with open water swimming— in the Summer Olympic Games. “It’s this amazing thing that there’s this community of swimmers and triathletes around the world,” marveled Cox via telephone. “It’s extremely exciting.”

However, as the number of open water swimmers has increased, so has the demand for more in-depth knowledge of the sport— from how to get started, to navigating currents, to planning a marathon swim. It was this need that inspired Cox to synthesize her years of open water expertise into a book: “So many people from all over the world for so many years have asked me questions about open water swimming,” she explained. “My friend said, ‘Why don’t you write a book that you can put all of what you’ve learned into one place for people?’ And I thought, ‘That’s a brilliant idea.’”

Open water swimming, said Cox, poses unique challenges to swimmers: Marine life, swift currents, chafing, hypothermia, and, yes—even death—are all real hazards of the sport. “This is not a controlled environment,” she asserted. “This is an environment that is absolutely, constantly changing. Things can happen in a moment that you would never expect, and that’s why this book exists.”

In each chapter of Open Water Swimming Manual, whether advising readers on how to choose a swimsuit or explaining the process of cold acclimatization, Cox weaves lessons on how to mitigate risks. For her, safety was a vital message to drive home: “It was very intentional,” she admitted. “I just started hearing about people who were getting hurt. They swam in water that was polluted, or they didn’t train long enough, or they didn’t acclimate and went into hypothermia.”

Also of concern to Cox was the increasing number of safety incidents occurring in open water events. She recounted a disconcerting story about a friend whose head was pushed underwater during a race by another competitor who swam over her. After reporting the incident to the race director, the friend was told that this was just “the way things were done.” Cox strongly disagrees with this sentiment. “Whatever happened to sportsmanship; why does it ‘have to’ be done like that?” she asked. “Why do we have to accept the way things are done if they’re not done well?”

Thus, although Cox had always intended for her manual to “help swimmers enjoy the water at any level safely,” her research soon compelled her to include more detailed water safety scenarios and precautions, with the hope that race directors, swimmers, and coaches would take them into consideration. “I was so lucky, because at that time I was in the San Diego area and I’d been allowed to talk to U.S. Navy SEALs and learn from them,” she said. One SEAL in particular—“L. Tadeus” (a pseudonym), whose long list of credentials includes the supervision of “high-risk maritime training”—provided a wealth of valuable information.

“He was the one that started analyzing things that went wrong [in training] and making suggestions to make them right,” explained Cox. “The officers on board or training instructors have to know how to make water safe for their trainees…and so what I really did was take their method and apply it to the open water.”

In addition to research gleaned from the SEALs, Cox consulted with numerous other experts, including seasoned open water swimmers, scientists, physicians, lifeguards, and even the U.S. Coast Guard. Almost every aspect of the sport for which one might seek information is covered in Open Water Swimming Manual, from the ocean’s flora and fauna, to basic first aid. By composing a symphony of comprehensive information—approaching open water swimming from every possible angle—Cox hoped that her readers would feel as though they were in the water with her. “I wrote this book in the way that I prepare for a swim,” she explained, “seeking out people who were experts. What I was doing, in a way, was piecing together a huge swim for the reader…I was really trying to give the reader a sort of three-dimensional approach to open water swimming.”

And yet, in spite of the manual’s comprehensiveness, Cox feels there is still much to be learned. She joked about the possibility of a second volume, but believes that the book’s present format—geared to swimmers of all levels, as opposed to specific age groups—was the best approach to take for this go-round. “[Swimming] is not really not age specific, which is really cool about swimming,” she said. “It’s really about your relationship with the water, which is what makes it so different from other sports.”

Open water swimmers, according to Cox, are a special sort: “People who do open water swimming really are engaged in their environment and recognize the [environmental] changes that are occurring and revel in that.” She conceded that a tough mindset is equally required for pool swimming, but its static environment can often eliminate engagement with the water and lead to boredom. This, she explained, is what sets open water exploration apart: “There’s more flexibility in the mindset you have for open water. If you’re engaged, there’s no boredom. If you’re aware of what you’re doing, it’s interesting and exciting.”

Above all, Cox hopes that swimmers who read her book will channel the information into a deeper enjoyment of her beloved sport. “[Researching and writing this book] was two years of work but 40 years of experience and all of these treasures people have given me, treasures of their knowledge,” she said. “I learned so much more than I ever knew.”

Chances are, readers of Open Water Swimming Manual will also learn more than they ever knew—and will happily secure a spot on their bedside table for this must-have reference guide, before dreaming of their next open water adventure.