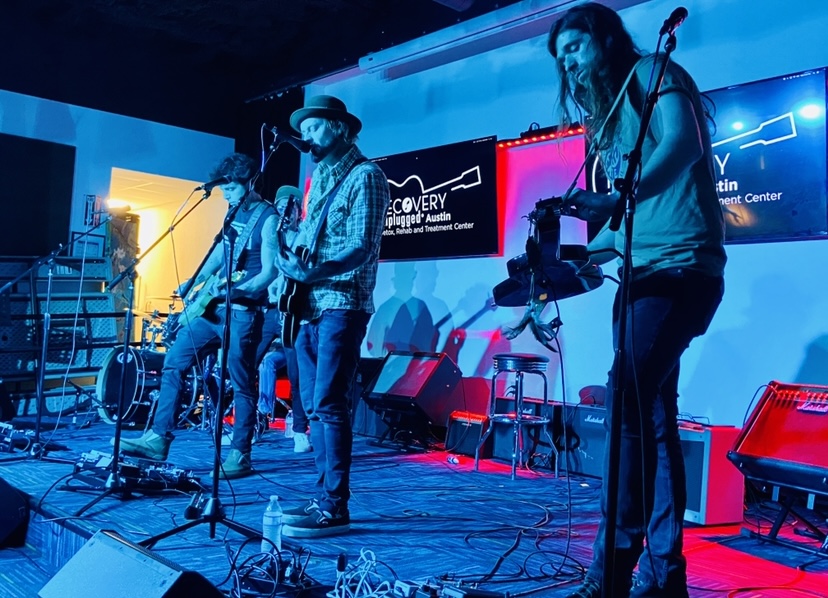 As the science around addiction grows, it’s becoming more clear that, with the right help, everyone has hope for recovery. This comes as a stark contrast to what was traditionally thought about addiction: that it was merely a character flaw, not a disease. It wasn’t until a series of studies from the 1970s by Dr. Bruce K. Alexander, which found that rats preferred activities and connections over drug use, that the medical world began reshaping the idea of what causes addiction. Now, it’s widely understood that having outlets for a full life and supportive, healthy relationships are key aspects to overcoming addiction.

Basing their program off this idea, Recovery Unplugged, an Austin rehab facility, is creating connections through their unique program that relies on the universality of music. The treatment center utilizes music in ways that opens clients up and allows them to feel safe, understood and able to connect with others.

In the program, music and treatment are intertwined for clients from the very start. Before they even show up on-site, the staff at Recovery Unplugged already knows each client’s favorite type of music and their favorite songs or artists.

“When we first pick them up or they fill out paperwork, that’s what we listen to,” Joseph Gorordo, vice president of business development for Recovery Unplugged, says. “If it’s the Death Tones, we’re listening to the Death Tones. Hearing familiar music automatically just puts your defenses down, opens you up a little.”

“When I first came to Recovery Unplugged, I was pretty guarded,” Armstrong explains. “But hearing someone else in the group say they like who I also like, it’s kind of like ‘Oh okay, you’re safe.’ It’s like how some people bond over sports teams.”

Once in the detox phase, clients will fill out a form called “Songs of Life” which outlines the songs that influence them or touch them personally.

“We ask them things like what their theme song is and what their recovery theme song is,” Gorordo says. “Songs that inspire them, songs that are sure to make them cry. And right there, you learn a lot about that client.”

The staff takes these songs and uses them to create playlists on the client’s MP3 player that the client will then keep with them throughout the program. Then, after the detox phase, clients will fill out the same form but this time in a group session. Here, clients share the reasons those songs made their lists, giving insight to who they are and what brings them there.

“One client awhile back was going through a messy divorce and was worried about losing custody of his kids,” Gorordo says. “On his happy playlist, it was full of songs from the movie Frozen, because they reminded him of watching that with his daughter.”

Having that group discussion of their favorite songs opens up the floor for making new connections through similar tastes and experiences. Armstrong explains that this allows clients to bond over things that don’t relate to anything that led them to substance abuse or any drug of choice which is common in treatment facilities — instead, it’s a bond through music.

“If you put a group of clients in a room, they’re going to be from all walks of life, all races, ethnicities, genders,” Gorordo says. “But it’s through music that they start to realize the things they have in common, and it allows them to connect with the people they may not have expected to have any connection with.”

For Recovery Unplugged, it’s all about facilitating connection. Once formed, clients have not only a community they feel close to, but more incentive and confidence to persevere through treatment.

“What helped me the most when I went through Recovery Unplugged was those connections, because I have a hard time relating to people,” Armstrong says. “It’s an out-of-the-box way to open people up and get in touch with their feelings.”

But it doesn’t end with connections with each other. Each group and level of treatment has weekly Open Mic sessions guided by their primary physicians or therapists. At these, clients are encouraged to open up on stage in a way that makes them feel connected to their own experiences. They don’t have to be a trained musician to perform, and this doesn’t always include music.

“It can be anything from performing their favorite song in karaoke, changing lyrics of a song to fit more to their own story, even interpretive dancing,” Gorordo says.

All of this inclusion of music and expression goes even deeper than just those connections. In fact, it gets down to the brain itself. Gorordo explains that the therapeutic benefits to music are built into humans, as listening to music stimulates more areas of the brain simultaneously than any other activity.

In particular, he says it stimulates the prefrontal cortex, which deals with impulse control and decision-making, while it also stimulates the corpus callosum, which is the problem-solving center of the brain. It even helps with the production of neurotransmitters like dopamine and serotonin, two that the brain struggles to produce after prolonged drug use.

“So, if we can build up the strength in those parts of the brain, we’re improving somebody’s chances of recovery,” Gorordo says. “And because of the unique approach, we give hope to those who may not have had success in other traditional treatment centers.”

Austin Artists for Your Workout Playlist