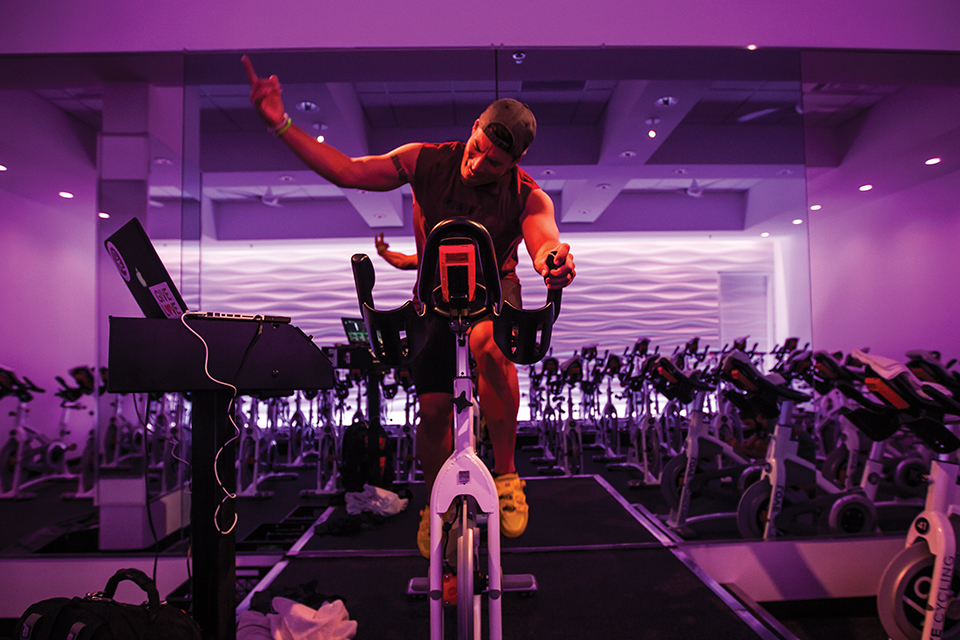 The word “love” can mean many things—passion, devotion, commitment—and for dedicated members of Austin’s cycling community, it means a new venue for indoor cycling. Located in the Pressler Apartments building downtown, Love Cycling Studio opened its doors in October, with a mission to engage Austin fitness fans.

Focusing on rhythmic riding, the workout classes are driven by the music, challenging each individual to keep the beat while moving through a series of positions on the bike.

“The rhythmic ride is beautiful when the entire front row is in synch,” says Love Cycling co-owner Stephanie Kincheloe. This feeling of synchronicity can transcend the workout and help lay the foundation for community and friendship, as it did for Kincheloe and fellow Love co-owner Maria Groten, and founding partner David Garza.

The three began conceptualizing the new studio in August 2014, aiming to build something tailor-made for Austin. When it comes to people in Austin, “they love working out and doing something new and fun and exciting and doing that with somebody, not just themselves,” Garza says. “That really creates an amazing community.”

Occupying the space that previously belonged to PureRyde, Love Cycling’s 2,500-square-foot facility features men’s and women’s locker rooms equipped with showers, lockers with USB ports for phone charging, and a studio outfitted with 50 Schwinn A.C. Performance Plus bikes with Carbon Blue. Designed to help deliver a comfortable ride, the bikes’ handlebars offer support to different kinds of riders, and two types of pedals that accommodate the toe clips. Riders are required to clip in, connecting the individual more to the bike and decreasing the chance of slipping mid-pedal.

The 45-minute classes are high energy and music-driven, and accessible to folks from casual gym-goers to serious athletes. For some classes, the atmosphere may feel more like a party or a club, “except it’s a healthier version of that,” Garza says.

Garza is regularly complimented on his ability to craft an enchanting, hypnotic playlist with songs intentionally chosen to get you lost in the moment. “You may not even know in the 45 minutes that you’ve burned 700 calories because you’ve had fun; you’ve either enjoyed the music, sang your heart out, did a little dancing on the bike, whatever the case may be,” Kincheloe says. Classes can also incorporate weights, crunches, and pushups on the bike, making the sessions a dynamic cross-training option.

The rhythmic style of riding is meant to be challenging, and can be a big change from other types of cardio workouts. At the suggestion of a friend, longtime runner Selina Moran started taking cycling classes with Garza two years ago. “After the first two weeks of classes, I was really sore in a lot of different places because I had never used those muscles,” Moran says. “As much as I ran, I thought that was pretty much a whole body workout because you’re swinging your arms and you’re using your core and your legs, but this was different. I saw myself tone up throughout my whole body.”

Another added benefit—“I had to change the way that I ate, which also changed my mentality,” Moran says. To get her body to properly repair physically and mentally after expending so much energy, Moran reframed the way she thought about her diet. She also invited more positivity into her life, working to have it carry through to her job as a paralegal in a family law practice. In encouraging the positivity piece Moran credits Garza. “David is such a positive person, and I need that in my life,” Moran says.

Garza has been an inspiring force in the Austin community since he began teaching cycling in 2007, amassing followers at each studio at which he’s taught, including Life Time Fitness, Castle Hill, and Ride.

His approach emphasizes connecting the body to the spirit. “You can always change your personal appearance, you can lose weight, gain weight, tone up, but it’s that person inside that really matters to that body,” Garza says.

There can be a more spiritual element that runs throughout cycling classes, as riders give themselves the space to mentally engage, while intense physical exertion provides a form of release. “It is something that is good for you emotionally, physically and spiritually,” Kincheloe says.

At the end of a Love Cycling class, riders will be offered a chilled eucalyptus-spritzed towel, and it’s the hope that the classes will help nurture a community.
“I think the community piece really helps with accountability,” Garza explains. “I think once people find like-minded people, they really gravitate toward each other, and it makes it easier to say, ‘Hey, let’s go to this workout and we’ll do this together.’ It’s more than community; it’s more like family.”
There’s the love.