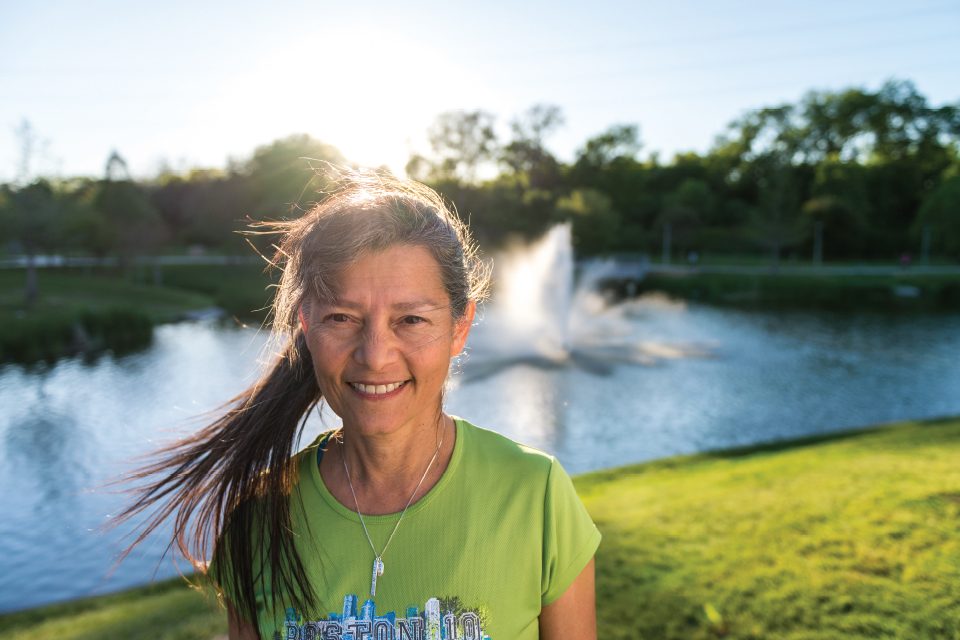 Hermon ran her 50th marathon at this year’s Boston Marathon.  Her very first race was the Capital 10K in 1982, and since then, she has run 16 Boston Marathons, 14 Austin Marathons, and many more around the country and world.

When Hermon first started running, she couldn’t find women’s running shorts and the Lady Bird Lake trail was only a fraction of its current size. Thirty-three years later, Hermon is an assistant coach and member of the Twenty-Six Two Marathon Club, an Austin nonprofit that provides free training for women who want to complete a marathon.

Austin Fit Magazine visited with Hermon about her passion for the sport.

When and why did you start running?

I started running back in 1981. I was living close to Zilker Park at the time, and I used to drive over there to go run, which is kind of crazy. The real reason I started running is because I didn’t want to be home when my ex-boyfriend would call. So I started running, and I still remember when I finished my first mile down there in Zilker.

What kept you going back after finishing your first mile?

Running just makes me feel good, and then you start to see kind of the same people out there at the same time, and you start to recognize them. You never talk to them, but they kind of become your distant friends.

When did you decide you wanted to complete a marathon?

I only wanted to run one before I turned 40. That’s all. That’s all I wanted to do, and my husband was very supportive. I tried training by myself, but it was very hard. And then one time he saw where Austin Fit [the marathon training group] had a program, and he said, “This is what you need to do.” And then my friend Robin, who was half my age, called me and said some of her friends were thinking about running Boston, and I was like, “What? That’s the big league!” And at the time, you had to do it [register] via paper.

Do you train alone or with a group?

It’s easy when you belong to a club. To me, it’s that camaraderie that keeps me going. It’s hard to train by yourself. I’ve tried running by myself. My life has been enriched by so many people I’ve met, and they don’t even know it.

What was Boston like for you last year, when the bombing occurred?

I walked down that morning, and I had told my son and his wife that when they see me finish, just head back to the hotel. So I crossed the finish line. My bus was the very last bus, the furthest away from the bombing. After we found the bus, I was putting my clothes on and talking to people, and then the first bomb went off. It was like a football field away, so we didn’t know what happened. Some people thought maybe they’re celebrating something. You could see this large, brown plume. So as I turned the corner, the second bomb went off. I turned around, and there was this young gentleman who was taking photos. He was calm, but you could see the fear, and he was telling everyone go back, just go back. And immediately I saw all the first responders.

There was a first aid lady with a wheelchair, and I asked if I could sit here. I was afraid that if I sat on the curb I couldn’t get up, because I do tend to cramp after a long run. I asked her if she knew what had happened and she said, “No, they haven’t told me anything.” So I tried calling my son, and nothing. I was there maybe 10 or 20 minutes. I finally got up and started heading towards the hotel. It was crazy, but calm. You could just sense there was something we didn’t know. I finally got to the mall, and my phone rings, and it’s my son, and he asked where I was, and I said I was at the mall, and he and his wife were at the reflection pool. All I could see were policemen in black and yellow vests. As soon as he saw me, he ran up and gave me a hug. I asked what happened, and they thought it was gunfire. So we stayed there for about three or four hours.

This lady and her son came up to us, and they had been sitting across from where it happened. We sat there, and saw a lot of ambulances, and finally my phone started ringing. They knew more here at home than we knew [in Boston]. So finally my phone started kicking in, and it was one of my brothers-in-law calling. My son answered to all my friends here in Austin. My coaches and a handful of other people were in Boston. It is beyond words, isn’t it? We were really lucky that we were OK.

What made you decide to go back to Boston this year?

I told my son that things like that make you not want to come back. But on the way home that Tuesday, there was a young gentleman who was working at a restaurant when all that happened—that was the thing you saw right away, people were helping—and so he said I should think about coming back. After that moment there was no doubt in my mind I have to do this again. You can’t let that kind of thing scare you, because that’s what they want to do.

What’s the most difficult thing you’ve had to overcome in running?

That’s a hard question. I’ve always seen it as very positive, because you don’t have to do it [run]. Physically I tend to get cramps, so I have to be very conscientious about taking my salt pills and stretching. I’m bad at stretching. That’s hard, but it doesn’t seem like it would be. It’s the rest of that balance, to make sure you’re running right and that it’s going to pay off. Everything else for me has been positive. I love shopping for clothes, and making my shoes last as long as they can. It’s been a very positive experience for me, and that’s why I keep running.