When Peter, or “sweet Pete,” was first adopted from New Hope Animal Rescue, he was heart worm-ridden and unable to do anything that increased his heart rate. But since being cleared for heart worms, in 10 months, Peter has quickly gone from sick to fit. Starting with short walks that eventually became runs with his mom, Peter is now her training partner — he even ran his first race with November Project last August. Truly embracing the Austin fitness community, Pete joins in for runs with the Morning Jo’s Run Club and workouts with the November Project, and he tags along with his mom to Knockout Kickboxing, where she is an instructor.

Try to beat Franklin in a race and you’re sure to be eating his dust. Not just a sprinter, Franklin runs about 50-60 miles each week, and he even won the Sunshine Run 5K with a time of just over 16 minutes. Not only is he fast, but he’s also agile and sly — and maybe not always for his own good. He once escaped his parents’ downtown condo to take a solo run to The Loop Running Supply and has been forbidden from Austin Dogtown for fear of jumping the 6-foot fence.

Riley does what her breed does best: she loves the water. Whether it’s going for a paddleboard tour or just a regular old swim, you can usually find her near the lake. She also loves to take advantage of all the hiking trails Austin has to offer. And when Riley is not busy swimming or hiking, she is off making the residents smile at Belmont Village Senior Living where she visits as a therapy dog.

Don’t mistake Apollo as a miniature horse — we are certain he is 100 percent canine. Regardless, Apollo truly understands the importance of overall health. After being diagnosed with large-cell lymphoma at only 4-years-old, his parents vowed to do their best to keep Apollo healthy and active for as long as possible. Apollo is an outdoor lover. He goes for weekly hikes and loves running through sandy beaches or snow-dusted hills during his many traveling adventures. And like any true Austinite, he also loves getting on the water for a SUPing session (yep, even at 150 pounds) and visiting local breweries. When he can’t get out around town, he loves to run laps in his yard.

Huxley is no stranger to overcoming adversity. He was born with a defect that caused his femur to grow out of the hip socket instead of into the hip socket. His femur started protruding to the point where he had a giant lump (the bone) under his skin and had to have the top of his femur shaved off when he was barely a year old. The vets said he would only have 60 percent mobility in his leg after his surgery. However, this doesn’t hold Huxley back, and his mobility looks like 100 percent. He will hike for hours, swim until you physically remove him from the water and chase a ball until his mom’s arm tires out. He loves visiting Zilker, hiking the Greenbelt, swimming in Lady Bird Lake and joining in on a cold beer at a nearby brewery.

Not only is she extremely cute, but Beezer is also a well-decorated dog. A Gold Agility Dog Champion, Beezer was a semi-finalist at the Cynosport National Dog Agility Trial for the last two years. She loves to stay fit through her regular agility training and aerobic trail loops. She also mixes in some high-intensity interval training through squirrel and deer chasing and is always up for a little frisbee keep-away.

Maddie is everything you could ask for in a training partner. She has pulled her dad through all his training runs the last three years for the Austin Marathon and Half Marathons. Maddie also placed fourth overall in the “fastest dog competition” at the 2018 Sunshine Run and placed fifth in 2019. She also loves to do hill repeats during Tuesday night RAW workouts and can sprint the length of a football field for hours chasing after a ball or stick. Launch anything into a body of water, and Maddie will retrieve it — no matter the distance. She also won’t hesitate to climb a tree just to follow a squirrel. 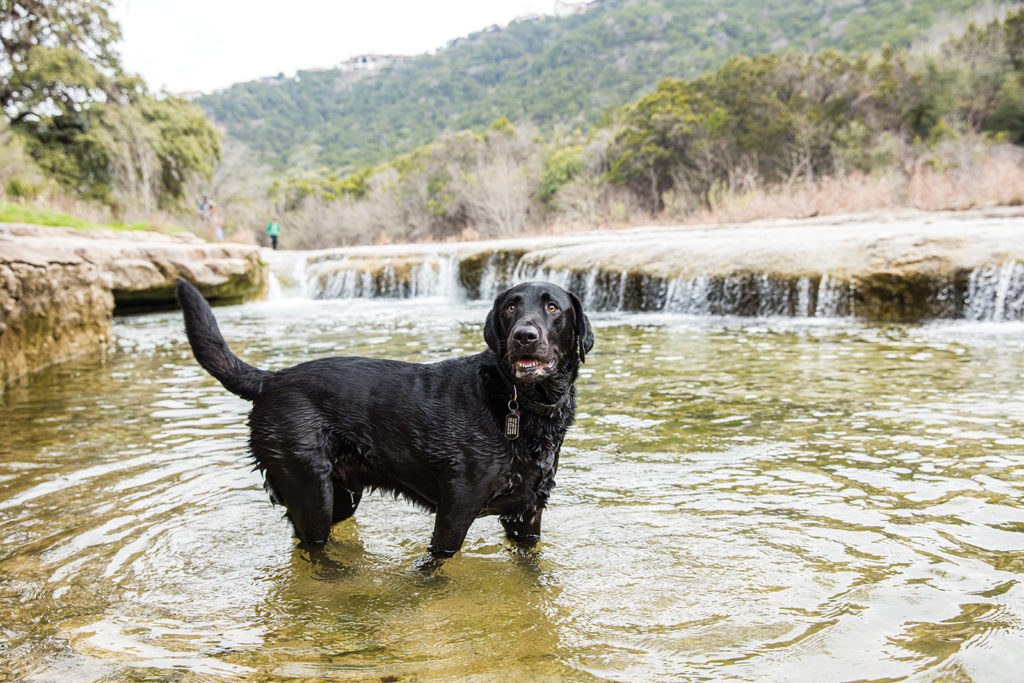 Just like people, dog’s can also have a fitness journey. Ranger is a great example. When he was first adopted two years ago, Ranger was severely overweight due to a life of inactivity in a shelter. First Ranger learned how to walk politely on his leash, then he got acquainted with Austin’s hiking trails, and now he is even a jogger. Ranger is an excellent swimmer and has swam at the Green Belt, Barton Springs and even friends’ pools. He loves playing with the many friends he’s made around the neighborhood and showcasing his world-class zoomies.

Ellie Bear never lets her size or short legs hold her back. She loves to go to the gym with her mom and will voluntarily get on the treadmill for a level 15 incline walk with mom. Outside of the gym, Ellie Bear loves to hike at all the trails around Austin and visit Zilker Park to chase balls and dogs much bigger than her.

Don’t let her name of a childhood junk food snack deceive you. Her name is full of irony, because Cheeto is all about clean eating. She prefers carrots, squash, broccoli and even lettuce over any kind of junk food. She is always up for some active fun and adventure. Although she loves hiking and playing with her neighborhood dog friends, Cheeto loves to run and walk with her mom, and basically has to exercise if she wants to keep up with her three lacrosse-playing older brothers.