On July 26, 2021, Yufei Zhang took home the silver medal at the postponed 2020 Tokyo Olympics after completing the women’s 100-meter butterfly event in just under 56 seconds. About two months later, Lizzi Smith finished with silver at the postponed 2020 Tokyo Paralympic Games after swimming the women’s 100-meter butterfly S9 event in about a minute and eight seconds. The difference? Only about 13 seconds and one hand. 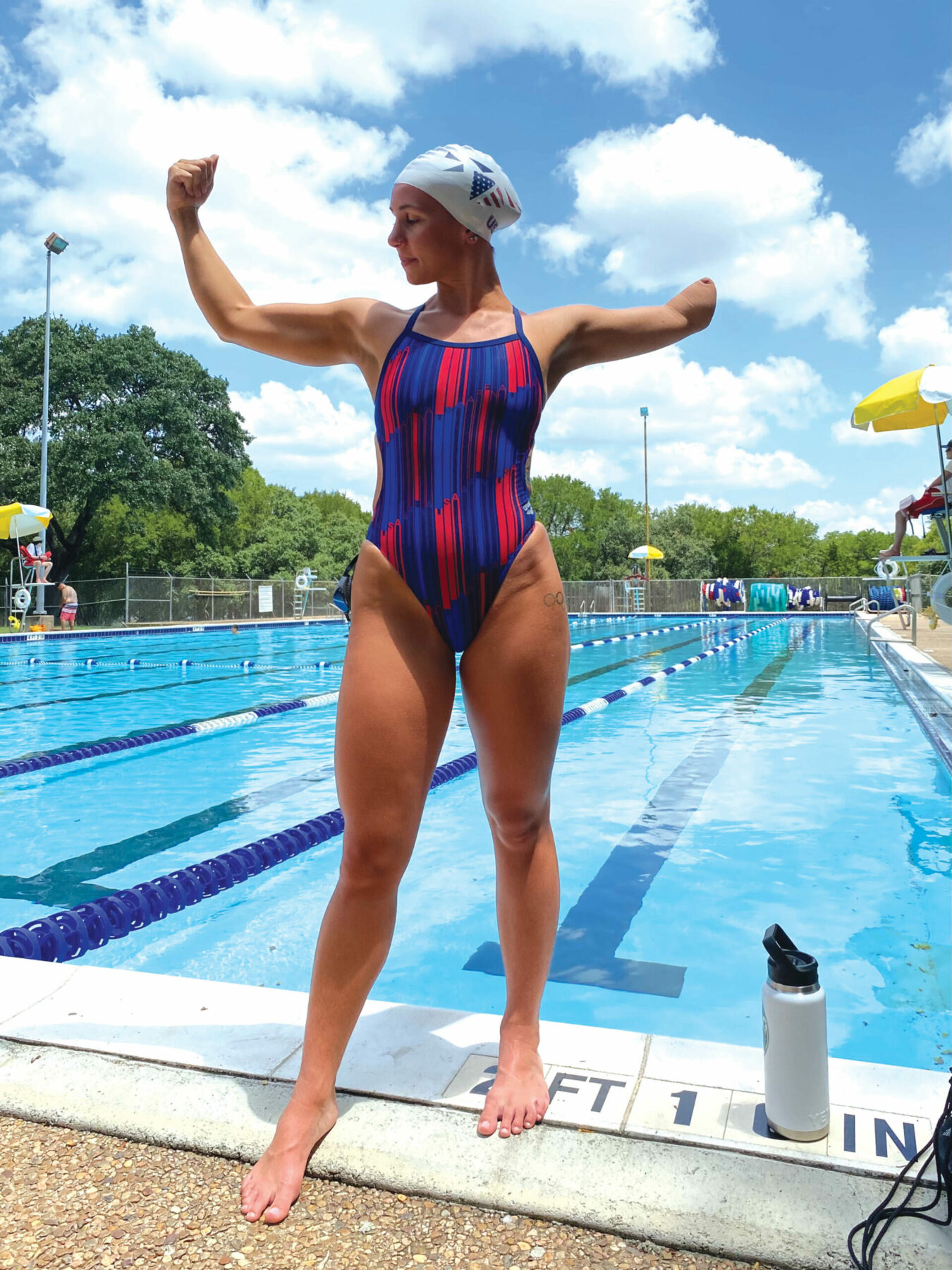 Smith, who was born without a left forearm because of amniotic band syndrome, is an S9 Paralympian swimmer based in Austin. Despite many people perceiving the Paralympics as a celebration of participation like the Special Olympics, she emphasizes that it’s actually a celebration of eliteness within the context of disability. After all, “para” refers to how it runs parallel to the Olympics.

“Sometimes we get boxed into ‘inspiration’ or ‘participation,’ but the teams are really hard to make,” Smith says. “I have to be the best swimmer in the world with one hand to get to go to these competitions.”

The Birth of a Paralympian

Born and raised in Indiana, Smith grew up with seven other siblings. As she was the second-to-youngest child, her parents were well-versed in raising kids; raising one who had a disability wasn’t any different. 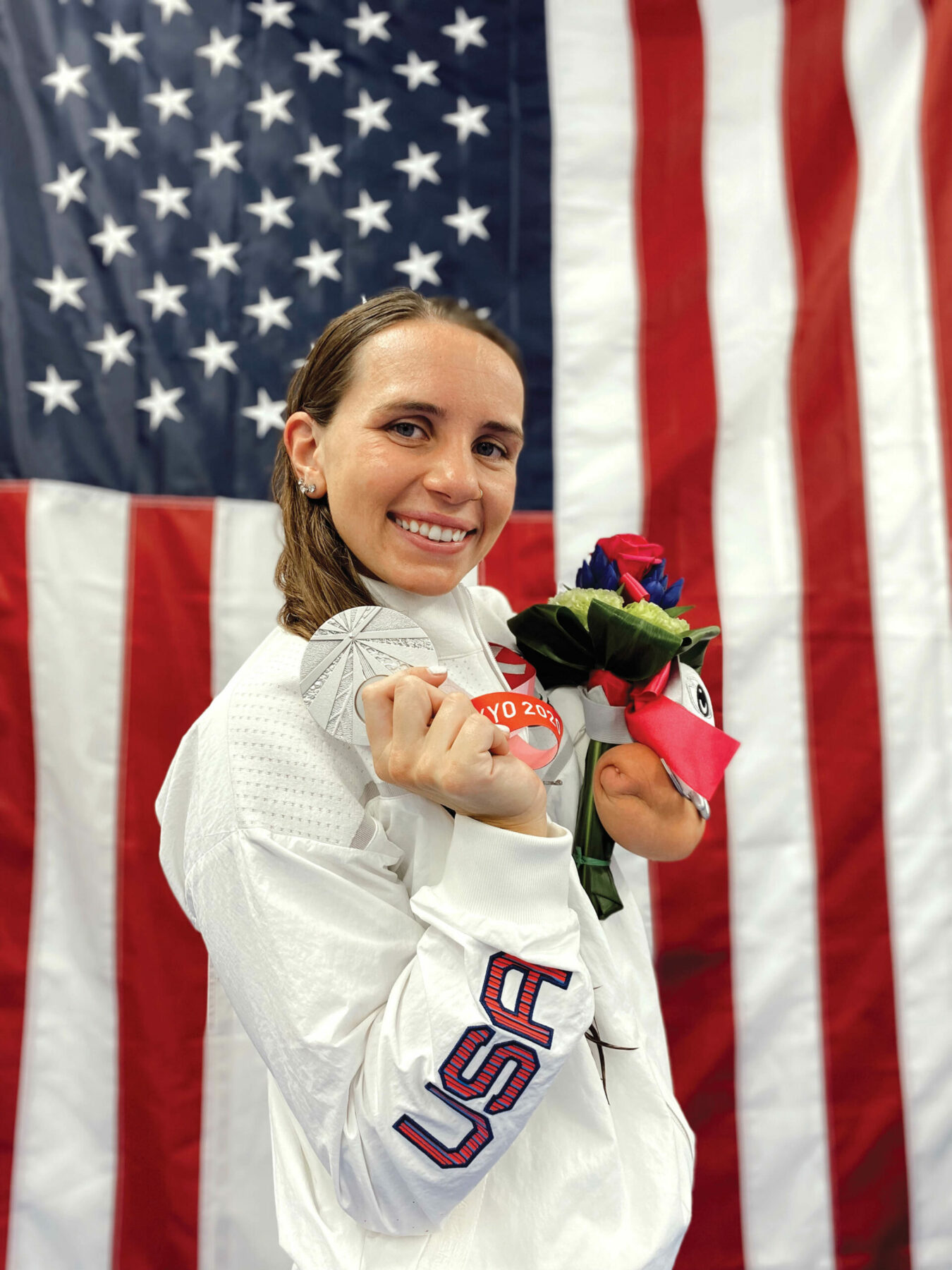 “Having a disability was super normalized in my house,” Smith says. “I have one hand the same way I have blue eyes or brown hair.”

The most challenging part about growing up wasn’t the fact that Smith had a disability but rather navigating the social aspect. She often felt as if she had to “come out” to others as having one hand because she could easily hide her disability.

Throughout school, Smith found herself naturally drawn to sports, claiming it was a way to keep up with others and prove that she didn’t need special accommodations. She craved to be thrown in the mix and denied any help, but many of her teammates and coaches doubted, often trying to make exceptions for her.

Smith only started swimming out of convenience as her older brother also swam, and it was easy for their parents to drop them off at the pool. She soon realized the desire for solitude is what kept her swimming. 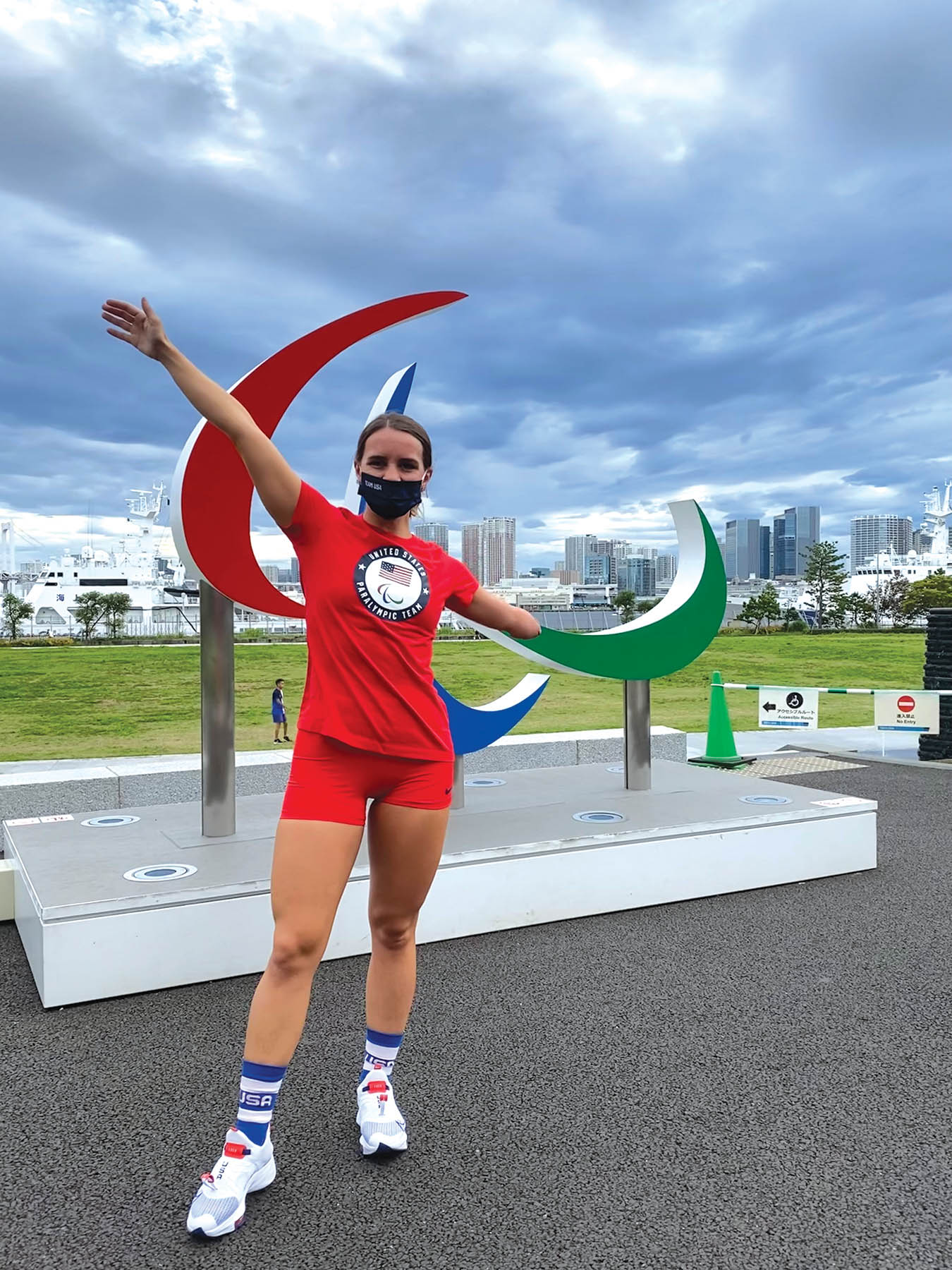 “I wasn’t being doubted in the water; if I was, I couldn’t hear it because I’m underwater,” Smith says. “It was the first place I could, without limitations, see how far I could push my body in what I could achieve in sport.”

Over time, she progressed in swimming, from leading the lane to winning the heat to going to state and eventually nationals. Everything changed when she saw a “Check This Kid Out” on Disney Channel, featuring Paralympian Jessica Long who was training for the 2008 Beijing Paralympics. That summer, 12-year-old Smith was also obsessed with Michael Phelps. She finally saw the opportunity where Olympic swimming and her disability crossed paths.

“I grew up never seeing anyone else with one hand, not in my community and definitely not on TV,” Smith remembers. “So seeing even just one person on TV who had a disability (that) wasn’t even the same as mine sparked a whole dream.” 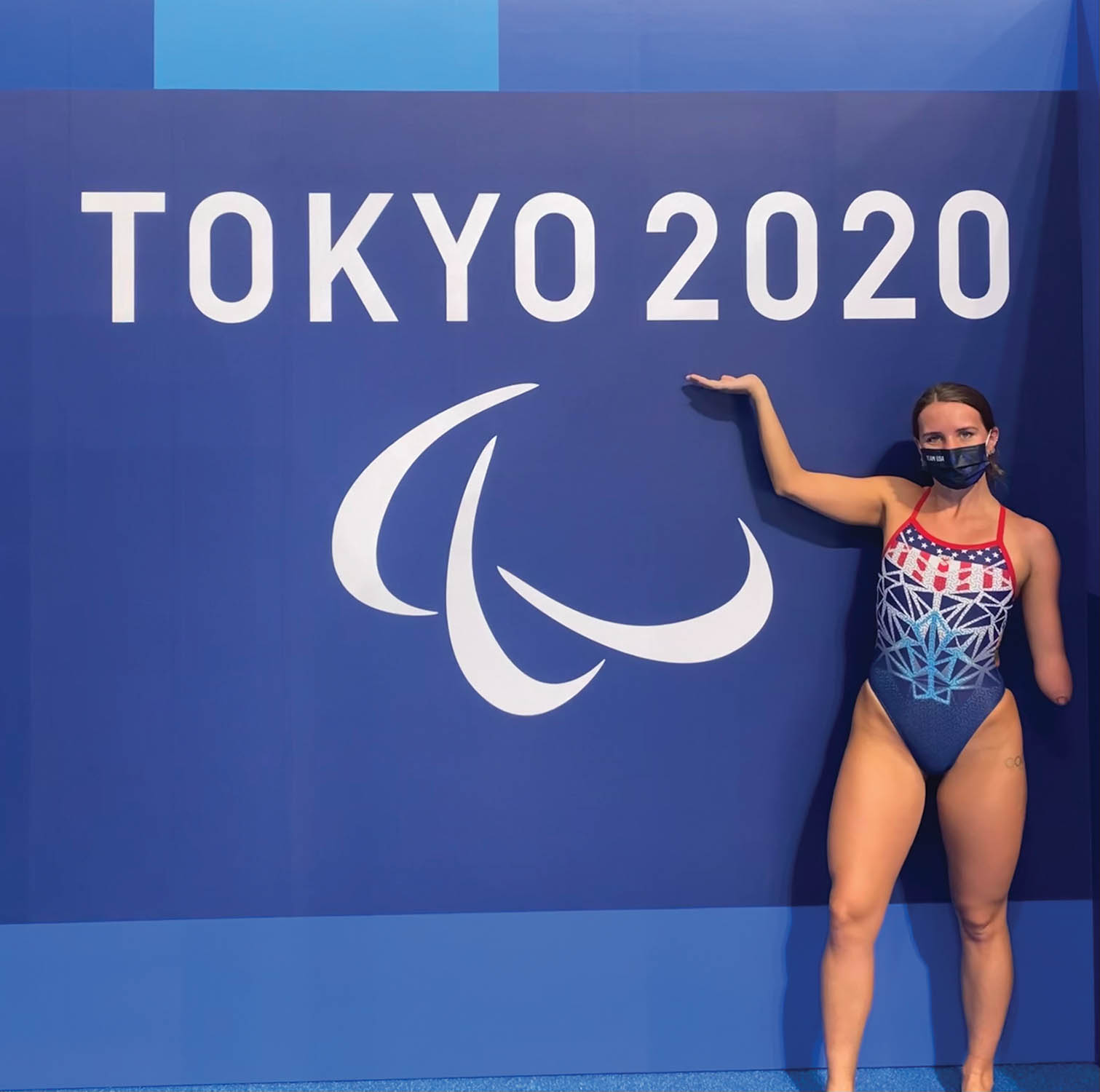 Starting out, the Paralympics was a foreign concept to Smith and her family. Smith’s dad took her to swim meets — her first one being in 2009. Eventually, she learned about the different classifications. In Paralympics, athletes are put into different classes, similar to wrestling weight classes, so they know who they’ll be competing against. Each classification is categorized based on the different disabilities one might have. In swimming, this ranges from S1 to S10 — one being the most severe disabilities and 10 being the least.

As an S9 athlete, Smith typically competes with other individuals who have one hand or one leg below the knee. Eventually, Smith made her first Paralympic national team in 2013 to compete at World Championships in Montreal. She later went on to win silver and bronze medals in two swimming events at the 2016 Rio de Janeiro Paralympics.

Following Rio, Smith took a year-and-a-half break from the water after feeling burned out and unsure if she wanted to continue competitive swimming. She moved to San Francisco for nine months and worked as a swim instructor, teaching adults how to swim. Then, she left in June of 2017 to go on a 7-month road trip that passed through Austin. The swift formation of her community and the plethora of water-based activities made the city feel like home. She ended up officially moving to Austin in January of 2018.

Eventually, a friend referred Smith to her most recent swim coach, Ian Crocker. She was drawn to his coaching philosophy of emphasizing the person first before their ability to swim.

“After my year-and-a-half break away from the sport, that’s what I need to want to come back and train for Tokyo,” Smith says. “I wanted to know I could train with my heart and not just be signing back up for boot camp.”

The Life of a Para Swimmer

For this past year, Smith has trained at the Eanes Aquatic Center in Westlake after previously training at Western Hills Athletic Club. Currently, she swims at public pools like Deep Eddy Pool and Garrison Pool in between competitions and national team camps. When she’s not training, she’s traveling to teach clinics to young swimmers, doing speaking engagements and hosting social media campaigns. 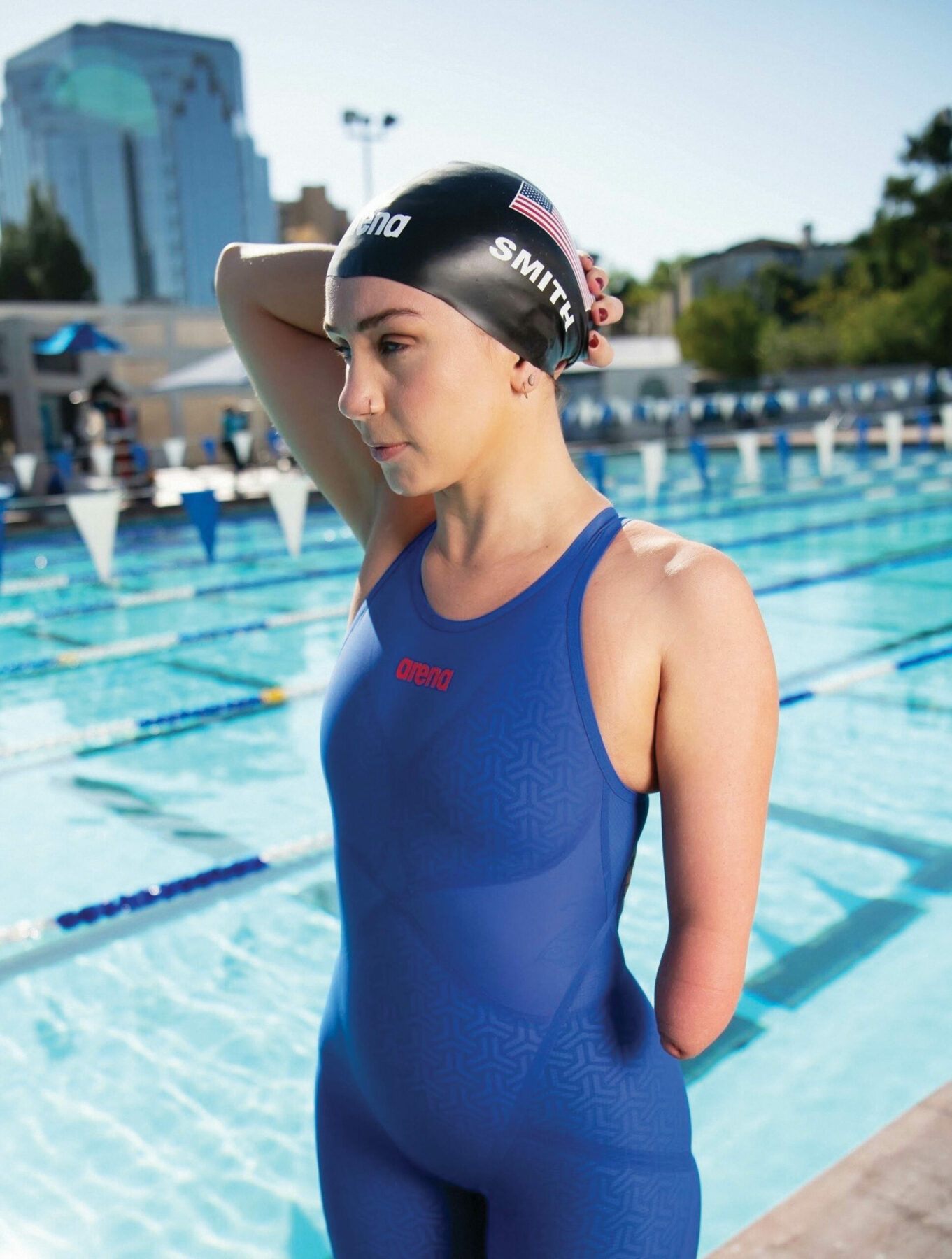 As of 2019, Smith now trains with a prosthetic, as she accumulated the budget for it. For the first time in 22 years, she was able to do a pushup as well as deadlift with two arms. She hopes to get a bionic prosthetic soon, which will allow her to fully move her hand.

In the Paralympics, some sports allow athletes to compete with prosthetics but swimming is not one of them. Fortunately, though she has a swimming prosthetic, she says it actually slows her down because of its dead weight.

Smith says one of her favorite parts about being a Para swimmer is that she finds new ways to fall in love with the sport. During her training sessions, she has the chance to be creative and adapt to exercises. 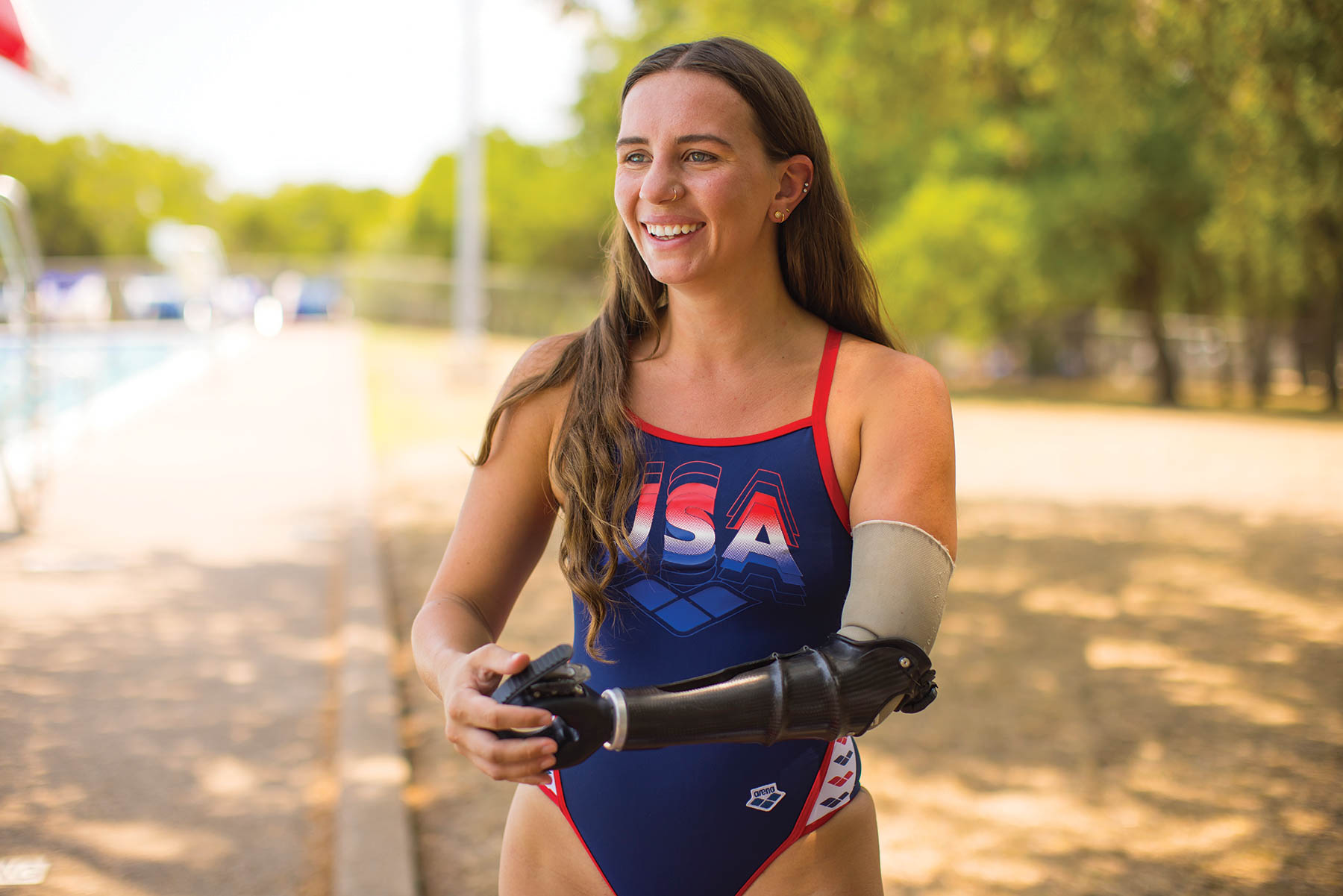 “Curiosity is the secret to longevity,” Smith says. “I’ll fall in love with the habit of (swimming), then loving waking up at 5:30 and embracing the rush of cold water, then for big meets (falling) in love with how do I change my training model? How do I push my body to something it’s never done before?”

Tapping into creativity as well as collaboration with her teammates and coach helps her stay engaged, constantly trying to solve the puzzle of being an athlete with a disability. From figuring out how to do a jump rope with one hand to strengthening her lats that were never used pre-prosthetic, she’s always learning something new.

While training taps into your creativity as a Paralympian, competitions teach you about perspective. Smith says the way you perceive outcomes of certain competitions depends greatly on the classification. As higher classifications consist of less severe disabilities, these athletes are typically more similar to their able-bodied counterparts. But as you look to the lower classifications, Smith says these athletes’ body systems can be extremely different from able-bodied athletes, making training look a lot different. 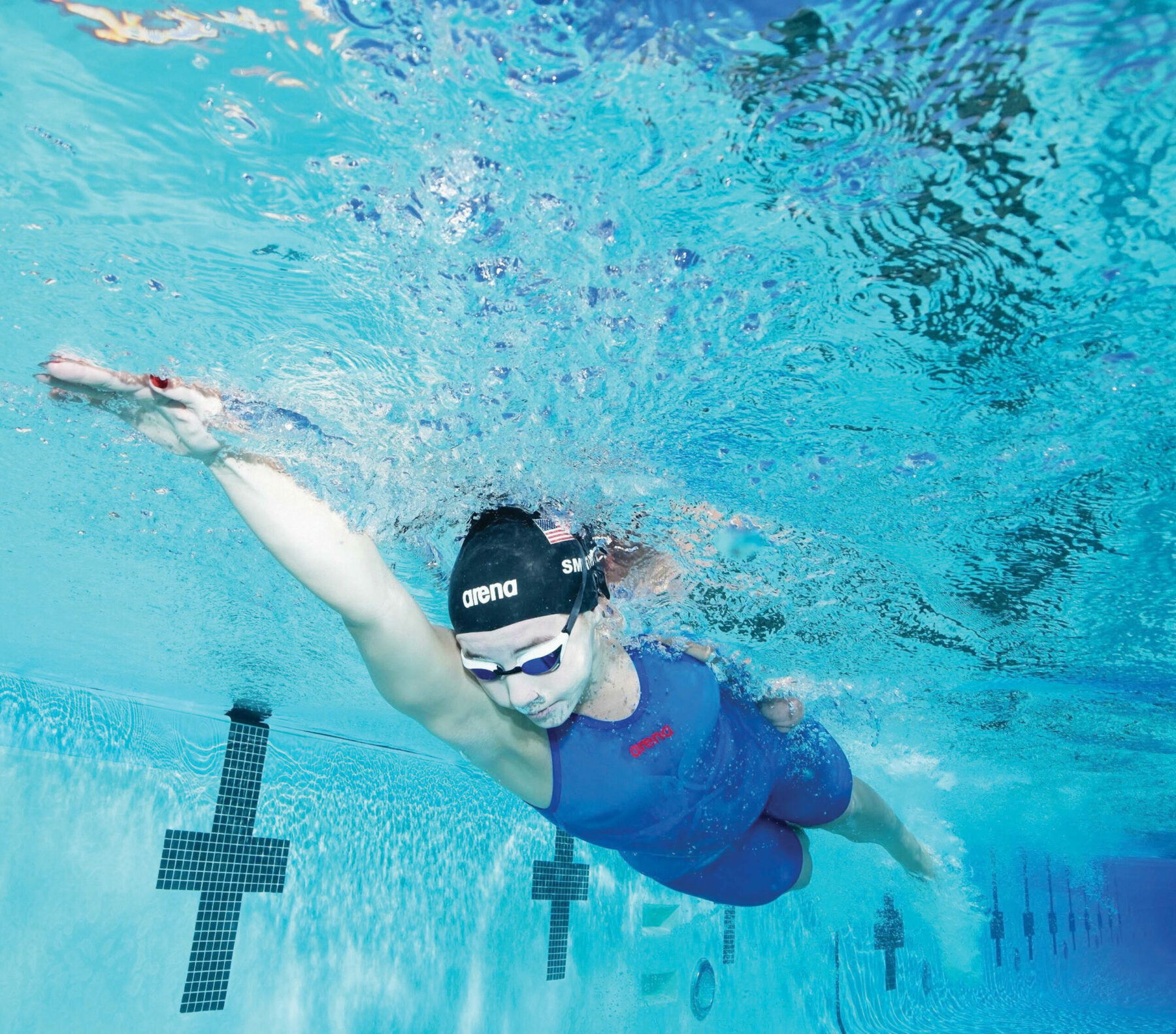 “An hour and a half on someone swimming paralyzed will probably feel similar to five hours (of an) able-bodied person working out,” Smith says. “You have to take yourself out of just yourself and what that would mean for you to swim up and down and (consider) what they’re putting their body through to understand the magnitude of how incredible it is.”

Smith shares that hearing other Paralympians’ stories reminds her how resilient the human spirit can be. Though, she clarifies that disabilities aren’t a tragedy, which is one of the biggest misconceptions people typically have. 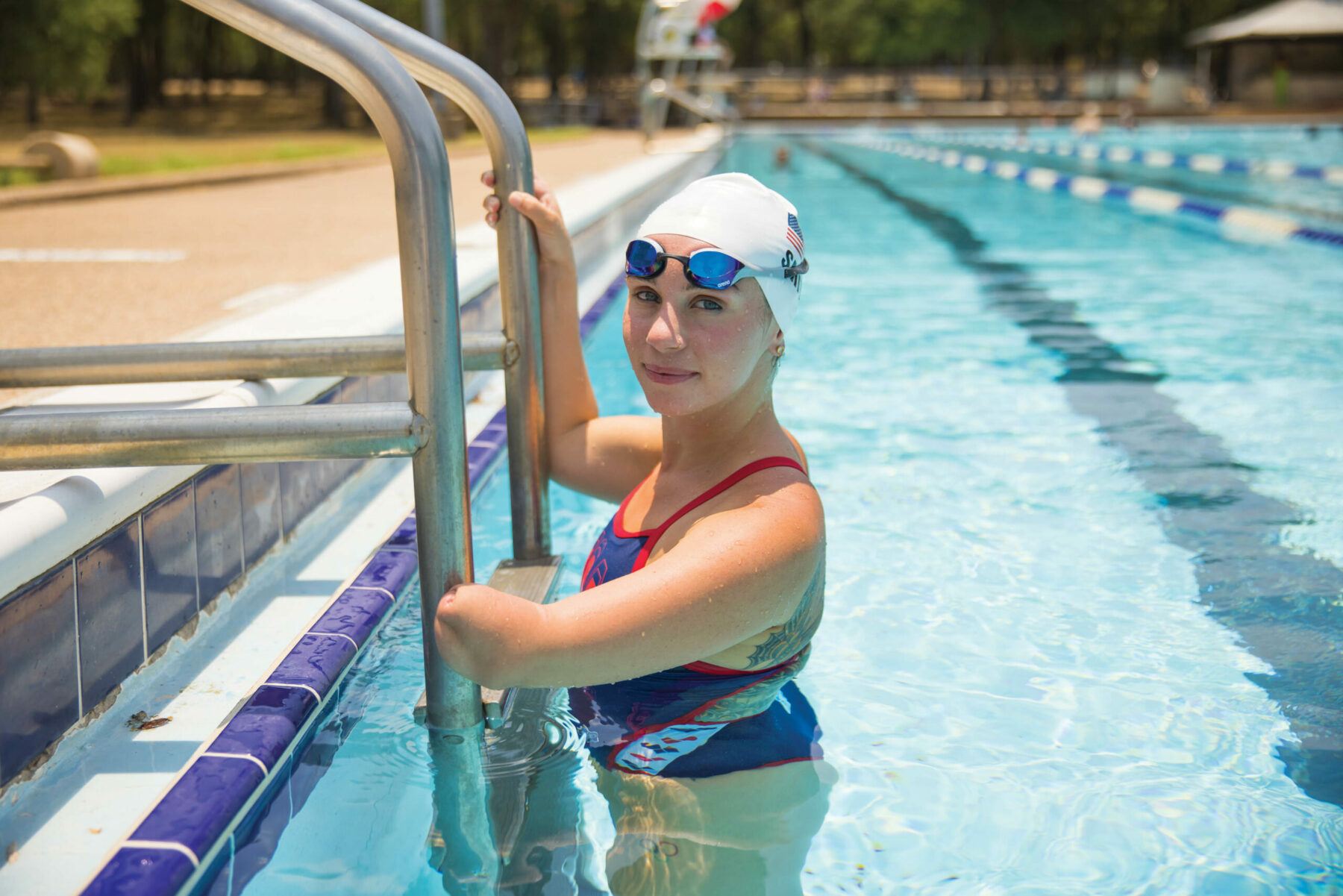 Smith and her team just won silver in the 4×100-meter freestyle relay at the World Para Swimming Championships at Madeira 2022, and she hopes to compete in the 2024 Paris Paralympics. She also aims to leave a legacy for the future generations of Para swimmers and hopes she can help other swimmers and athletes with disabilities feel represented.

“We need to see people who look like us, who pave the path and give us permission to dream,” Smith says.

As athletes around the world try to see a piece of themselves in Olympians like Michael Phelps, Smith says, even more so, people can relate to every Paralympian story as they represent the triumph of the human spirit and adapting to new challenges — something everyone has experienced. These stories can serve the greater purpose of helping others realize their potential by just giving them the opportunity to see themselves and build upon their dreams.

“It’s crazy to think about other athletes watching me the same way I watched that girl on Disney Channel,” Smith says. “But that’s why we do it. Then, 10 or 15 years from now, maybe some little kid will be saying they saw me in a Gatorade commercial.”

The Art and Science of Bodybuilding

Pet of the Month: How Are Donations Being Used at APA?