The two capoeira schools collaborated to open the event. Professor Esquilo from Capoeira Luanda described capoeira as an art developed by African slaves in Brazil—a collection of rhythmic attacks and defenses crafted to look like dancing rather than training to fight. Unlike in many martial arts, when capoeiristas match their skills against each other, they do not call it sparring but “playing a game” or “playing capoeira.” 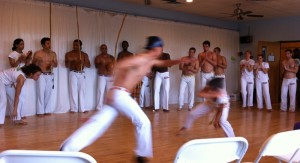 Music is extremely important for practicing capoeira. Students from the two schools formed a half circle, and while a small group played berimbaus and other instruments, the rest of them took turns playing the game, two at a time—constantly moving in response to each other’s movements, performing impressive acrobatics, and changing their pace with the pace of the music.

“It’s gorgeous,” said one member of the audience. “It’s amazing how they can see how the other person is going to move, hear how the music is changing, and respond to all of that.”

Next, Professor Alexandre Santos from Gracie Barra South Austin introduced Brazilian Jiu-Jitsu (BJJ), a martial art that involves grappling and ground fighting. The Gracie Barra group earned the audience’s attention immediately with a demonstration in which a large man squared off against a small boy, and the boy managed to get on the man’s back and choke him; this emphasized one of the core concepts of BJJ, which is a focus on using leverage rather than strength to outmatch an opponent. Other students from Gracie Barra took turns showing the audience how BJJ practitioners “roll”—their form of sparring.

Rising Sun Aikido’s Libby Sensei and her students showed the audience a variety of attacks and aikido responses to the attacks. The Rising Sun group explained that aikido is a non-aggressive martial art, meant to protect the one being attacked and the attacker. Libby Sensei demonstrated that by fending off attack after attack, neutralizing the attackers’ aggression with gentle pressure to nerves and joints that dropped the attackers to their knees, or with light throws that used the attackers’ momentum and ended with them on their backs.

Another audience member said, “I enjoyed how there were four very different martial cultures represented. Each was effective and beautiful in their own way.”

That describes the demonstrations perfectly. Each martial art looked and felt completely different from the others, but they all emphasized precise and efficient movements. The practitioners providing the demonstrations ranged from beginners to experts at the top of their field. As one viewer said, “All of this looks like things I could never do, but I see kids and adults who are clearly new to it, and they are doing it and enjoying it. I can’t decide which one I want to try more.”

Kickin’ It was put together by Jack Martin, a student at Capoeira Luanda, with some help from the folks at Galaxy Dance Studios. Jack said, “I wanted to highlight the connection between martial arts and dance through movement. There are many underlying connections between the dancing and fighting. Dance and martial arts both revolve around two roles; the lead(s) (aggressor) and the follower (defender).”

After the demonstrations, Professor Esquilo from Capoeira Luanda conducted a capoeira beginners workshop.

Jack Martin is working on another showcase at Galaxy Dance Studios, planned for October. As he said, “In a world with so many different forms of martial arts, self defense, and fitness routines, I believe it's important for people to know that movement is a natural occurring element in all aspects of our daily lives, so it's important to find one that’s fun and applicable in your daily routine.”

You’ll find one (or more!) if you attend one of these spectacular showcases. In the meantime, check out the links to the martial arts schools that participated in this showcase. They all offer free introductory classes.

“No Limits”: Taking a look at Audrey Mestre and Freediving Through ESPN’s Nine for IX Film Series