“No Limits”: Taking a look at Audrey Mestre and Freediving Through ESPN’s Nine for IX Film Series 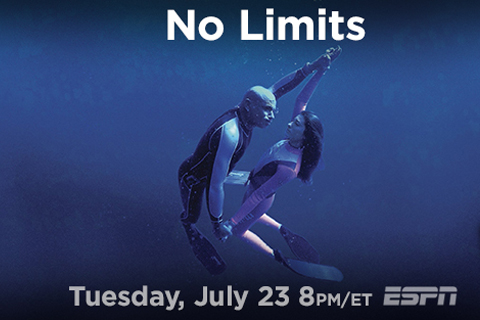 Part of any sport is pushing the limits—to go faster, longer, win more, set records.  It’s what drives athletes to get up, work hard, and test themselves.  For those who are hobbyists, the testing may be only personal.  For more accomplished athletes, the world is their stage.

Few blink at the idea of trying to run a faster 5K, lift a bigger weight, or best that pull-up record set back when they were in better shape.  But there are some sports that cause an observer to pull back, to wonder, to ponder that drive to excel, to question:  “Is it worth it?”

Tuesday night’s ESPN documentary, “No Limits,” (7 p.m. CT) takes a look at the sport of freediving and at one diver’s quest for the No Limits diving record.  Director Alison Ellwood takes a riveting look at Audrey Mestre’s fateful October 12, 2002 dive, her attempt to break the record, which had been set—for both men and women—by freediving legend Tanya Streeter just six weeks earlier at an amazing depth of 525 feet (160 meters).  In freediving, no tanks or gas are used; the diver “simply” holds her breath, descending on a sled attached to a cable and ascending with the aid of a bag that, when filled with air, pulls her to the surface.  Streeter had gone three minutes and 26 seconds without breathing to a depth ten feet deeper than the Frost Bank Building is tall; Mestre was set to challenge her when things went horribly awry, and she died after being pulled to the surface by her husband, fellow freediver and record holder Francisco “Pipin” Ferreras.

The focus of Ellwood’s “No Limits” is on Audrey Mestre’s accomplishments and the troubling circumstances of her death.  The film is part of ESPN’s “Nine for IX” series:  nine films by nine female directors about women in sport, all in honor of the 40th anniversary of Title IX, Educational Amendments of 1972, which outlawed sex discrimination.  At first, Ellwood was not sure she wanted to take on the story, which created controversy in the freediving community as to what role Ferreras had played in Mestre’s death.  She’d viewed the footage (freedives are recorded as part of the record verifying process) and was disturbed by the challenge of presenting the information without sensationalizing it.  And then, she asked herself, what was the story here, the greater angle, in terms of women in sports?

“Tanya helped clarify this for me,” Ellwood explained.  She met Streeter; the two talked; Ellwood came to see that telling Mestre’s story was really speaking to the greater human condition, the desire to challenge and push the limits of what people are capable of.  Streeter had been the first woman to ever break an overall record in any sport.  While Ellwood couldn’t question Mestre, she began to see in Streeter’s passion and desire a window into Mestre: “I saw Tanya as a living embodiment of Audrey,” she explained.  “There are a lot of similarities between the two—their incredible love of sea life and the ocean, their spinal injuries, they’re beautiful women—though I suspect that Tanya is the stronger force.”  Ellwood convinced ESPN to move away from the original angle of the film, that of Mestre and Ferreras as two star-crossed lovers in a romanticized tragedy, and to take an impartial look at the circumstances in context of that drive to be the best.  The question then became, did Mestre want the record or did she act to fulfill her husband’s desire for fame?  And was her death a senseless accident or something darker?

Streeter was originally hesitant to revisit the accident.  She viewed the original pitch as “too morbid, too morose” and had no interest in being a part of the production until she spent time with Ellwood.  She became convinced that Ellwood was the right person to treat the story respectfully.  She also felt that it “went against everything I am, as a person and as a freediver, to not do this; I have an opportunity here to go on record,” and threw herself into the project.  Streeter, in addition to being profiled, provided commentary in the film as well as acted as Ellwood’s technical consultant.  “Alison was very interested in the real story,” she explained.

Ellwood worked hard to present the facts in a balanced manner.  “Audrey’s death deeply divided the freediving community,” Ellwood stated, “and it was difficult to ask people to revisit that time.”  Getting the safety divers, judges, and technical folks involved in that ill-fated dive to speak on film involved establishing trust; she’d reach out, ask for their participation, and then give them time to consider.  It took a while but, ultimately, everyone involved cooperated; everyone, that is, except Ferreras, who declined all requests.  Ellwood became fascinated by the role of mental focus in order dive to depths that, as she put it, “could crush a submarine.”  She came to see it as a profoundly human story—she actually created a much longer film that explored the history and technical nature of the sport as well as Mestre’s story, though ESPN opted for the shorter cut (she’s hopeful that it will find an audience in Europe, where the relatively obscure sport has a greater following). Ellwood wrote, directed, and edited the film, and part of her challenge was how to present actual dive footage, both of Streeter’s record-breaking dive and Mestre’s fateful attempt.  She opted to use a split screen, with a running watch in the middle.  It’s a brilliant technique that allows the viewer to experience the dives in actual time while allowing a distance through the expert commentary from the dive’s participants.  It also allows the viewer to identify with the safety dive team that felt Mestre’s death so keenly…and to underscore the conflicted feelings of all who were involved.

The film took a year to make and, ultimately, brought Streeter little closure.  While a new men’s No Limits record has been set, no woman has bested Streeter’s 2002 dive.  This weighs on her: “I set a wheel in motion,” she said, ruefully.  “Of the six people who’ve tried for this record, two suffered catastrophic strokes, three died—I lost another close friend—and I am the only one unaffected and alive.”  She’s still angry about the circumstances surrounding Mestre’s death, and she wanted to be sure that the film brought honor to her colleague’s talent and accomplishments.  And it does, which brings into even greater focus the senselessness of those tragic events.  Ellwood reflected on the role of “No Limits” as part of a healing process:  “It’s not for me to say [what actually happened]; I wasn’t there.  But I hope the freediving community can come to rest; people got to speak their minds, and I hope they can move on.”