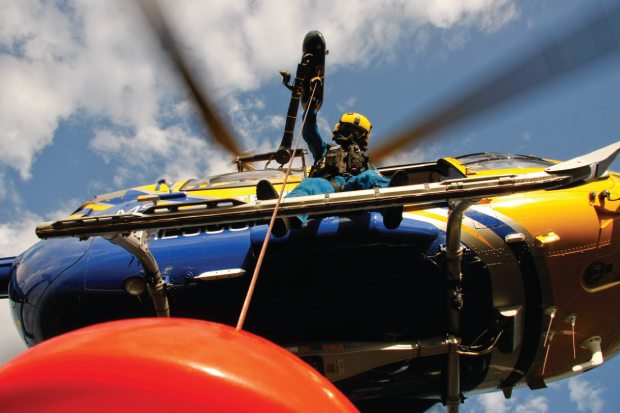 In the world of endurance sports, people often train for months or even years before a race. The same is true in the world of rescue. In these events, however, participants do not know when they will be asked to compete, so they must keep themselves in top physical condition at all times.

The night before Halloween 2013, rainstorms descended on Austin that transformed neighborhoods into unrecognizable flood zones, leaving some people fighting for their lives against quickly rising water. Travis County Fire and EMS crews began a rescue effort that would stretch well into the next day. Race day, in essence, had arrived.

The power of the flood can be understood by sheer volume; LCRA data shows that, at the peak of the flood, more water was surging down Onion Creek than flows over Niagara Falls. It can also be appreciated by how swiftly the storm unleashed its fury; the creek rose 11 feet in just 15 minutes, overflowing its banks and sweeping cars off roadways, uprooting trees, and lifting houses off their foundations.

There is the human cost; at least four people drowned in the flood. Others were left clinging to trees, road signs, or anything available as they desperately waited for rescue.

By the time Jamie Van Wagner reported for duty as a flight nurse at Travis County STAR Flight on October 31, crews had already been working through the night in violent weather to rescue stranded victims. At 7:04 a.m., it was still dark when Van Wagner and her crew were launched on their first rescue; minutes later, she was being lowered from the helicopter down into the fierce, rolling water to rescue a man desperately clutching to a tree.

At 5-foot-6 and 115 pounds, Van Wagner was fighting against a much larger foe. “The water was extremely rough,” she recalled. “I was getting thrown around and the second I would hit the water, it would force me in a different direction.” 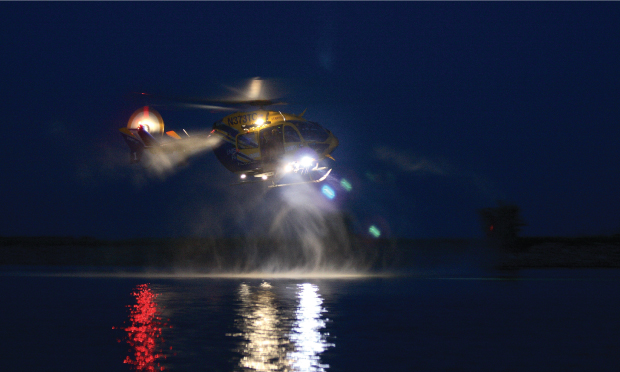 This first rescue took nearly 30 minutes and a tremendous amount of effort. “I had to use every bit of strength that I had to try and get past the force of the water,” she said. When it was over, a man’s life had been saved and Van Wagner had experienced first-hand some of the worst flood waters in nearly 100 years. She had a cut above one eye from colliding with a tree branch, and bruises on her arms and legs would be visible in the days to come. In that moment, she ignored pain the way a fighter ignores punches from an opponent. Instead of reflecting on their victory, she and her crew immediately began preparing for the next rescue. Daylight had just barely broken, revealing a scene of devastation below that made it clear that their job was far from over.

The next rescue they were called to was for five people trapped on top of a minivan surrounded by fast-moving water. After that, they rescued eight people who were stranded on the roof of a house. Van Wagner kept performing throughout the day like she was taking part in an endurance event, except lives were on the line. “After each rescue I would have a brief moment to gather back all of my strength that was needed for the next mission,” she said.

Her longest break came while refueling the aircraft. She had the opportunity to eat part of a granola bar and drink some water. While the aircraft refueled twice, Van Wagner did so only once. “Luckily, I train a lot like this by taking back-to-back workout classes,” she said.

The physical demands of that morning were similar to what Van Wagner puts herself through during workouts, minus the bludgeoning from the trees and water. “I usually go to a cycle class at least two, if not three times a week. I also attend the cross-training classes,” she said. “This usually consists of cardio, lots of push-ups and squats, and some weights. Depending on how my schedule is, I try to fit in a body pump class as well. I also spend time swimming and occasionally will run. On busy days when I don’t have time to go to the gym, I will try to fit in some push-ups, squats, and abs at the house.”

As the day wore on and the rescues continued, Onion Creek reached its maximum flow of nearly 110,000 cubic feet per second. It was during this time that the crew was asked to look for a man who had called for help on his cell phone; just before the call was lost, he'd said that he thought he was going to be swept downstream. After several minutes of searching, they located him in the water underneath a tree. He was in the strongest part of the current, clinging to something under the water. Barely able to keep his face above water, he could not be expected to hold on much longer.

Having already fought this battle for several hours, Van Wagner knew what she was up against. The pilot positioned the helicopter, and the crew chief lowered her once again into the angry water, directly upstream of the victim. She found something underneath the water to brace against, and, with the full force of the flood at her back, strained to stay upright. Using her body to shield the man from the force of the current, she put him into the rescue collar and had him ready to hoist up in just 7 seconds. As the crew chief engaged the hoist, Van Wagner emerged from the water holding onto a man who was exactly twice her size.

The record-breaking floods that hit Austin over Halloween dictated rescue scenarios that were anything but routine. However, preparing for days like this is nothing out of the ordinary for Van Wagner; “I push myself to the max in every workout, which I truly believe is what helped me to prepare for the day of swift water rescues,” she said.

Like any endurance athlete, Van Wagner could measure her success in part by the impact on her body: “By the end of the day, every muscle ached…my body was put to the ultimate workout and endurance challenge.” In this particular competition, though, there was an even greater measure for success. Van Wagner’s dedication to physical fitness directly led to her saving lives that day, and she can think of no greater reward for self-discipline than this.

“Being able to impact someone’s life like that,” she said, “was truly the best feeling in the entire world.”

Failure is the First Step to Success