As quarantine continues to push back, cancel and completely reshape any plans made for the year, this “new normal” can be a tricky thing to get used to. But in order to reconnect with the world during this time, it’s important to rely on one’s own memories and the stories of others.

One such story that allows both world exploration and self-discovery lies within Gary Guller and his expedition to Mount Everest in 2003.

It’s a dangerous feat, climbing Mount Everest, but it’s one that continually draws people from around the world since its first recorded summit of Sir Edmund Hillary and Tenzing Norgay in 1953. And since the start of quarantine, climbing the height of Mount Everest from one’s home—6,506 flights of stairs—has become something of a trend.

Having lost his left arm in 1986 in a climbing accident on Mount Orizaba when he was younger, Guller’s story is different from the rest—not just in his physical disability, but in his unrelenting nature that threw caution to the wind and embraced his own handicap.

Even having experienced every climber’s nightmare, Guller had continued to climb, hike and explore the world with a new passion for life—refusing to let his handicap or nerves get the best of him.

“It had always been a dream of mine as a little kid to stand on top of the world,” Guller says.

Then, in 2001, he attempted to summit Mount Everest for the first time. Summiting the mountain, the tallest point on Earth, reaching 29,035 feet into the air, really is standing on top of the world.

It’s not uncommon for an Everest expedition to have to turn back. With weather liable to change instantaneously and the altitude physically and mentally impairing climbers, the journey can be one tip-toeing between life and death. 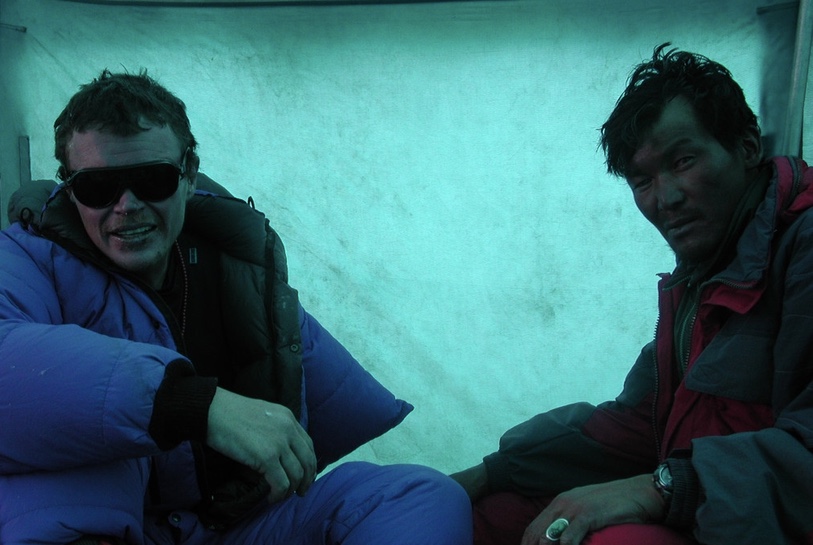 Coalition of Texans with Disabilities

Once Guller returned to Austin after this climb, he was broke and undoubtedly disappointed from the failed expedition. It was then that his friend, Dennis Borel of Coalition of Texans with Disabilities, asked him to speak at an event. As one of the oldest nonprofits in the state, the organization works primarily in advocacy, awareness and consulting.

“I had never spoken to a group of people in my life,” Guller says. “I was very, very nervous. I didn’t think I had anything worth saying.”

Without him knowing it, this one event sparked a career for Guller as a voice for disabled individuals and as an inspirational speaker to all. It was in that first crowd, too, that a quadriplegic man asked him if he would ever consider taking someone like himself—confined to a wheelchair and unable to move most of his body—on the adventures that Guller spoke of in Africa, the Himalayas and beyond.

“My first thought was, ‘Not only does this man have an incredible disability, but this guy has to be at least a little crazy,’” Guller says. “But then I realized, ‘Guller, who are you to question what this man wants to try or to achieve?’”

After the event, the two men exchanged numbers, and Guller went to Borel to discuss the possibilities of an expedition. In the end, they decided that the CTD would send Guller and a team to Everest. The goal: get the largest cross-disabled group—meaning it had members with both physical and/or cognitive disabilities—to the base camp of Mount Everest, and then, from there, send Guller to the top with a small climbing team.

“Then, it was two years of a whole lotta knocking on doors to get support and funding and most of it primarily through the state of Texas, the residents and companies based in Austin,” Guller says. “If it wasn’t for the community in Texas and Austin especially, I don’t think any of it would have ever come to fruition.”

The Expedition to Base Camp

By the time 2003 began, it had been a long two years of planning and raising awareness. With the added bonus of 2003 marking the 50th anniversary since Sir Edmund Hillary and Tenzing Norgay had made that first Everest summit, the team got on a plane and set out to make history of their own.

The journey from Kathmandu to the Everest Base Camp typically takes about 14 days, but the CTD team built in extra days to allow everyone to move slowly and together.

“We all had very unique challenges,” Guller says. “And this allowed for a happier hike and adjusting to altitude which increased the likelihood that everyone would be able to make it to their goal.”

The team to Everest Base Camp had 28 members—eight of which had physical disabilities. Two Sherpa members also had physical challenges. One had an arm amputated and the other his leg, both resulting from snake bites in the village when they were children.

“We were constantly encouraging each other, it seemed like,” Guller says. “Even when things got real tough, we just kept each other up and kept pushing.”

When they arrived at the Everest Base Camp, 17,598 feet above sea level, Guller recalls the surrealness of that collective feeling of achievement.

“Standing on the summit was amazing, but getting to base camp was perhaps my most favorite day of my life,” Guller says. “It was very challenging, but we stuck together. We embraced our unique abilities as opposed to fearing our disabilities.” 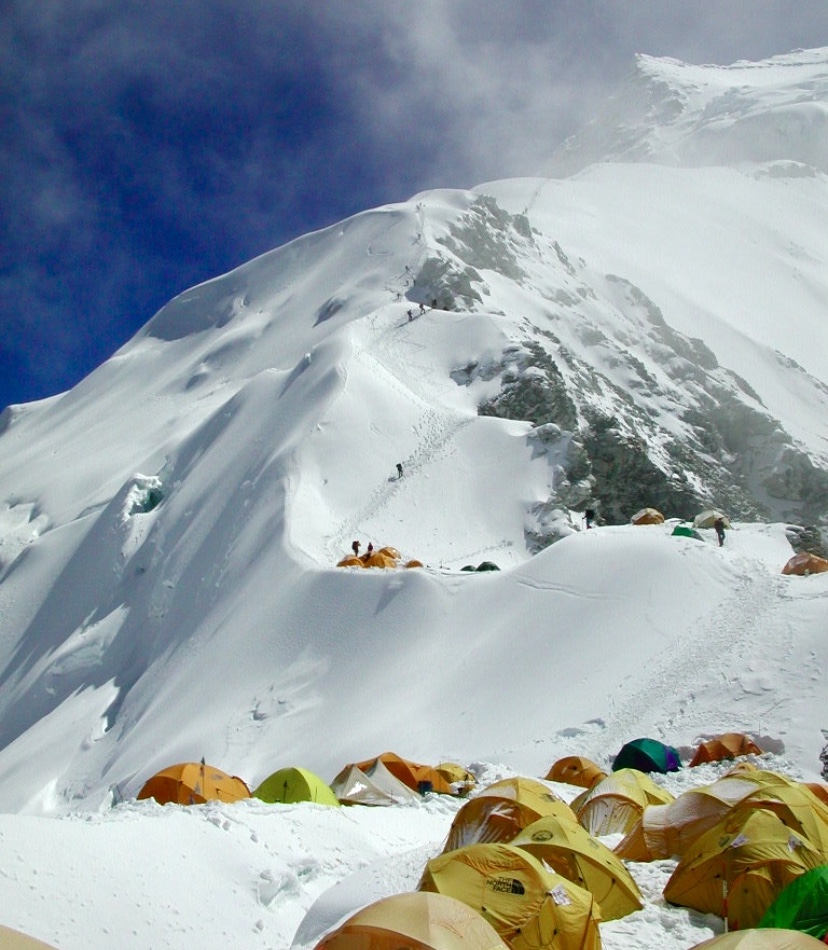 The Climb to The Top of the World

After getting everyone successfully to the Everest Base Camp and setting a world record for the largest team of people with disabilities to do so, Guller and a team of six others said their goodbyes. The Everest Base Camp expedition team headed back to Kathmandu for their journey home. Guller and the rest of the summit team prepared for the next six weeks of making their way to the summit.

But when Guller arrived at camp three, he realized that he couldn’t go back down and then go back through the difficult challenges he had faced on the way to camp three—specifically the challenges Lhotse Face offered. Lhotse Face is notorious for the difficulty it gives climbers, and for Guller it was especially hard to maneuver. Guller says this was the only time that turning back and giving up popped into his mind.

“That whole climb was very difficult for me. I really had to think about how I climb, how I go up and down ladders, how I balance,” Guller says. “By the time I got to camp three, my whole right side was very, very tired.”

However, because of the amount of support and the people looking on from all over the world, Guller knew he couldn’t just stop now. So, the next day, Guller and his team—including four of his closest Sherpa friends—Nima Dawa Sherpa, Pem Tenji Sherpa, Da Nima Sherpa and Namgya Sherpa—made the push to camp four where they were stuck for three days due to a storm.

The danger of altitude is unavoidable on the mountain and difficult to prepare for. This is especially true for the mountain’s “Death Zone,” named for the fact that, at 26,247 feet, there is not enough oxygen for humans to breathe, and the body begins to die. Camp four lies within this zone.

Even though they were trying to conserve their oxygen tanks, they knew on the third day that they had to either abort the mission or make a summit attempt.

“When I went to unzip the tent, the wind outside just went from like 100 to 0,” Guller says. “My Sherpa friend and I looked at each other and we just said, ‘Okay, let’s go, let’s get this done.’”

They left around 7 p.m., as is typical for summit attempts, climbing throughout the night. They arrived at what’s called “The Balcony” around sunrise and watched the sun light up the world around them. By the time they reached the Hillary Step, some five or more hours later, Guller was again wearing down his energy.

The Hillary Step, no longer there, was an odd rock formation that was a difficult point for all climbers. For Guller, it again offered different challenges, as ice climbing was difficult without a left arm. Standing there with his crampons in the ice, looking down at the thousands of feet of open air below him, he froze.

“I always tell people it was my Texas Hold ‘Em moment,” Guller says. “I just knew I still had to see this through. I gave myself the permission to succeed.”

Not long after the step, he did. Down on his hands and knees, laughing, crying and praying with his Sherpa friends, he had made it at last. When Nima gave him the receiver to phone it in to the Everest Base Camp, Guller says he could hear almost the whole camp celebrate with him—not just his team.

“That’s when I knew that people understood, because the expedition really wasn’t about a guy with one arm standing on top of the world or a guy in a wheelchair making it to base camp,” Guller says. “It was about people coming together to achieve something that had never been achieved on this scale before, and that’s what has power.”