Sharing Ideas to Better the World 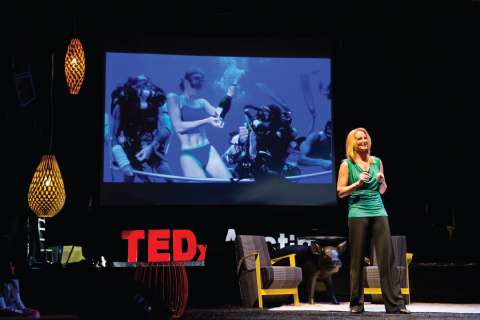 In 1984, the world was introduced to the TED conference. “TED” is an acronym for “Technology, Entertainment, and Design,” and the TED conference was designed to bring people from these three fields together to share information and learn from one another. Since then, the nonprofit organization has grown and expanded beyond the original areas to encompass an amazing variety of fields. There are two annual conferences, the spring event in Long Beach, California (with a simulcast held in Palm Springs, Florida) and the summer session—known as TEDGlobal—in Edinburgh, Scotland. Over the course of four days, fifty speakers take the stage. These are “thinkers and doers,” described as “the world’s most inspiring voices,” who are challenged to give the talk of their lives in 18 minutes or less.

The concept is that these inspiring voices bring listeners to another level. “Every so often, it makes sense to emerge from the trenches we dig for a living and ascend to a 30,000-foot view, where we see, to our astonishment, an intricately connected whole,” reads the website.

These inspiring talks, which reach some 1,000 conference attendees at their original presentations, needed to be shared and so TEDTalks were released online in 2007. More than 900 videos are free to be shared at www.ted.com/talks and are arranged by all sorts of interesting categories, such as “rated as jaw-dropping” and “courageous” and “global issues,” to name but a few (there’s also a great search engine). And, again, all talks are 18 minutes or less in length.

Because of the popularity of the conference, there are now “TEDx” events, which are “designed to give communities, organizations, and individuals the opportunity to stimulate dialogue through TED-like experiences at the local level.” Austin has its own TEDx conference, which is typically held toward the first of the year (the next upcoming TEDxAustin will be on February 9, 2013. To learn more, go to www.ted.com/tedx/events/6310. But don’t go to the website expecting to learn the speaker lineup in advance. Shawna Butler, TEDxAustin organizer, explained that the Austin conference is the only one that withholds the speaker list until midnight before the start day. “We want to encourage people to come with an open mind and an open heart,” Butler explained. This keeps attendees from forming set notions about the information they will experience and challenges them to come with “a different orientation and paradigm.” Butler compared finding out the speaker lineup to Christmas morning: not knowing in advance “adds to the magic.”

This last February, the theme of the TEDxAustin conference was “Beyond Measure” and it’s no surprise that Austinite and world record freediver Tanya Streeter was tapped to give a talk. Butler had met Streeter at Lifetime gym where the two work out. They had gotten to know one another and, when the theme for 2012 was announced, Butler felt that Streeter would explore the topic in an “interesting, nonobvious, and personal way.” Streeter’s talk was titled “Redefining Limits” and she gave a riveting account of diving and expanding her boundaries. A clip from the upcoming Plastic Oceans documentary is included in her presentation as well.

The Difference Between Work and Play

It’s the “Thoughts” That Count