With bare feet, colorful dresses and decorated faces, five women are positioned in a circle as their bodies and arms gracefully shift up and down like the pulse of a heartbeat. As a flow of geometric and expressive body movements follow, the women dancing in Anuradha Naimpally’s production of Sacred Earth Stories capture the attention and imagination of everyone watching.

The bells attached to the women’s ankles accent the rhythm of their stomping feet with a jingle. Their hand motions discreetly tell a vital story, changing with every beat of the rhythm. Their facial expressions capture the emotions of the story told throughout the performance.

“Dance is an artform; it goes so far beyond the physical,” Naimpally says. ”When I am dancing, I feel like it is an out-of-body experience.”

In 1991, Anuradha (Anu) Naimpally began hosting dancing lessons in her garage in Cedar Park. Now, almost 30 years later, her business established as Austin Dance India, Naimpally has made herself known as a producer, composer, mentor, teacher, dancer and performer around the world.

Teaching the traditional Indian dance form called Bharata Natyam, Naimpally has built an organization focused on the mission of empowering others through dance.

“This is my language,” Naimpally says. “So, if I’m going to express something, even something about a social issue, which is a human experience, I can express that through this movement language.”

Throughout her career, Naimpally has used Bharata Natyam as a way to teach parables, introduce Indian culture and articulate timely social issues. According to Naimpally, there are three basic proponents to this style of dance: the abstract movement, the drama of characters and storytelling.

The abstract elements refer to the technical body movements, Naimpally says. The movements made with the arms, in addition to exaggerated facial expressions and stylized movements of the whole body, add dimension that complements the story being told through hand gestures.

In addition to the complex footwork, perhaps the most intricate aspect of Bharata Natyam is the sign language dancers use to develop plot lines and carry the piece along in a chronological fashion.

“Any human situation, any human emotion or relationship can be portrayed or depicted on stage with hand symbols made with one hand or two hands,” Naimpally says. “With this, we can say just about anything.”

While Naimpally is passionate about performing and educating her audience and students on historically artistic traditions, Naimpally also can’t help but see the way her art form can be used to make a difference in the present and future.

“Art doesn’t exist in a vacuum; it’s so much a part of what’s happening in world events,” Naimpally says. “There are certain things I see happening, and I just feel like I need to do something about it. It is very fulfilling to be able to reach people through this dance language.”

Although Naimpally does not consider herself an activist, she has produced and performed many pieces which have brought awareness to different topics and give the people involved an opportunity to take action.

In 2016, Naimpally’s daughter, Purna Bajekal directed a video in which some girls from Austin Dance India recreated a video introducing the 17 Sustainable Development Goals presented by the United Nations in 2015. Dancing Bharata Natyam to the song “Wannabe” by the Spice Girls, the one-and-a-half-minute video educated and empowered people to take action on those specific goals.

Following the video, Naimpally and her daughter co-produced and performed a show called Living on the Hyphen. Touching on specific issues including gender equality and quality education, Austin Dance India also partnered with organizations taking action. Throughout the show, information was provided to the audience on how they could get involved, volunteer or contribute to the causes.

Naimpally says throughout the years she has collaborated with a variety of artists and organizations. Currently, Naimpally is working with local refugee teens on a story called Home: Where Do I Belong?

“This piece will touch on migration, displacement and immigration,” Naimpally says. “We have so many stories of people who run away from violence and atrocities, or they have been displaced. This production will touch on certain questions: Where did he come from? How do they find where they belong? What is home for them?”

As a teacher and mentor to her students over the decades, Naimpally has not only influenced many of her students to learn about social issues, but she has also impacted the lives of her dancers on a personal level.

Naimpally says this is one of the most fulfilling parts of her job.

“I see girls from a young age and mentor them for sometimes 10 years,” Naimpally says. “I get to be an influence in their lives and see the power dance has to transform people and help them discover their own strengths and their inner beauty and see them empower themselves to feel empowered in their own bodies. That is what really keeps me going.”

Soumya N. Ashok has been a student under Naimpally for over 10 years and considers Naimpally a part of her family. Ashok says over the years, she has gained stamina, mental focus and confidence in herself.

“As a woman in today’s society, I have struggled with body image issues like many other women, sadly,” Ashok says. “Anu has really helped me to feel a sense of finding beauty in my own body and my own movement.”

Ashok says she gains the most when practicing and training for performance. Her favorite memories, she says, have included practicing for productions such as the 2020 Sacred Earth Stories. 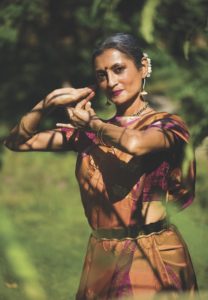 “When working toward performance, Anu has reiterated the values my family always expected or shared with me and my sister growing up,” Ashok says. “And being able to put it into practice through dance has been a really foundational part of my life here in the states.”

Originally from Chennai, India, Ashok says the music and the rhythmic patterns and dance inspired by scripture has been a big aspect of connecting with her culture.

“I am not a religious person, and Bharata Natyam is rooted more in mythological compositions about divinity,” Ashok says. “Studying Bharata Natyam has pushed me to dig for what the metaphors the stories and the mythological tales are trying to establish, and that has been a point of personal growth for me to be able to understand.”

Through Bharata Natyam, Naimpally has brought Indian culture close to many people. Through teaching and mentoring many South Asian girls, Naimpally continues to connect her students to their heritage, culture and traditions.

Through the years, she has made a difference in the lives of her audience by introducing Indian art forms to diverse groups of people all over Austin and the world.

Tom Mitchell is among those who reached out to Naimpally after her first production of Sacred Earth Stories in 2019. Mitchell’s wife had heard about the performance, which connects ancient mythologies with current climate issues, and decided to bring her husband along to watch.

Mitchell says he was not expecting to be so impacted by the performance, but was moved to tears by the dance and emotion that flowed through the show.

“What really struck me was the story,” Mitchell says. “Our culture and most of our planet is rooted in a myth that inevitably leads to the death of our planet. But in Sacred Earth Stories, which Anu portrayed in such a heartfelt manner, is the story of the earth goddess providing abundant life and nurturing all forms of life.”

Mitchell says since attending the performance, he has changed the way he lives in order to help do his part in saving the environment and spreading the word on how others can do the same.

Naimpally says this is exactly what Bharata Natyam and dance is supposed to do for the audience. Since the beginning traditions of the classic Indian dance form, Bharata Natyam was used in the temples as a form of worship and entertainment.

As Naimpally has studied and cultivated this style of dance, she has learned more ways to bring people to a space beyond themselves.

“Bharata Natyam and dance, it takes you to a space where it elevates you,” Naimpally says. “That is really the goal of Bharata Natyam — to elevate the heart to a higher place.”