Nestled off West Sixth St. is a small, green house originally built in 1910 as a wedding gift from a father to his daughter. Fast forward to 2020, it has been transformed into a local hangout spot for Austin’s fitness community called The Clubhouse on 6th.

A wooden staircase leads up to a white front door, and inside there is a low hum of voices, talking and laughing amongst one another, accompanied by the comforting sound of a needle on a record coming from somewhere in the building. Directly in the entryway, one is greeted by a black and white, checkered floor and a “kegerator” dispensing cold beer for clubhouse frequenters.

“It’s an old Victorian home, so it’s like a historical Austin landmark,” says musician and owner of The Clubhouse on 6th and the Clubhouse Outfitters athleticwear brand, Will von Rosenberg. “It’s really cool.”

Even though he comes from a background of oil and gas, Rosenberg says he has always wanted to create a brand that wasn’t confined to athleticwear or products, but a brand that would inspire others to live a happy, healthy and active lifestyle in the Austin community.

“I knew I wanted to start something else — more than just trying to get the next deal done and make money — that’s all we did,” Rosenberg says. “I woke up, literally threw some stuff in my truck and headed back to Austin.”

After months of nailing down clothing styles and fabrics, Rosenberg finally received his first set of inventory in October of 2019. In February, Rosenberg moved into The Clubhouse on 6th and began renovating it to be the spot he always dreamed of.

“I always wanted to have a clubhouse. Like, that’s the dream,” Rosenberg says.

Inside the clubhouse, it’s easy to spot the Live Music Capital’s influence, with a mix of athletic frequenters, eclectic fabrics that hang from the walls, vintage finds and records that are in almost every room.

“This is a cool, safe, open-minded community,” Rosenberg says. “You can come change into your shoes, run down the trail, get like a five-mile run and come back, have a beer, spin a record, hang out. That’s kind of what I want the Austin people to know, that that’s what we’re doing over here and that everybody’s welcome.”

Walking deeper into the building, one can find a small store, lined with Clubhouse Outfitter’s inventory: hats, tank tops and running shorts for both men and women. Only a couple paces away from the checkout counter is a record player with vinyls (hanging from clothing hangers) just above it. The Clubhouse’s collection includes everything from Ray Charles to Willie Nelson, and is always adding to the selection.

“We have a really cool, old vintage record player from the 50s that I found. We do a Daily Spin, is what I call it, from the Clubhouse Instagram. We’ll spin a record and throw it on the story,” Rosenberg says. “We’ll always have music.”

More records line the walls of The Clubhouse on 6th’s hangout room, in addition to giant, metal letters that read, “Hey Y’all.”

“It’s definitely a shop and a store, but you don’t just come here if you want to buy something. It’s like, if you want to hang out. I have friends that come in if they want to get away from the house to work from home,” Rosenberg says.

In addition to the athleticwear brand and clubhouse, Rosenberg also began the Clubhouse Crew, which is a group of Austinites from a variety of athletic backgrounds that test the different products he is developing and give feedback.

Jordan Whittle, part of the Clubhouse Crew, says she has enjoyed watching the brand grow and evolve since its infancy.

“The Clubhouse atmosphere — it’s super inclusive, and we take a lot of pride in the city of Austin,” Whittle says. “We’re looking to kind of form a supportive culture where we can motivate one another, whether that be to run your first marathon or even run your first mile. We want to make sure everyone feels comfortable and it’s a safe space, even if you’re just getting started in your athletic journey.” 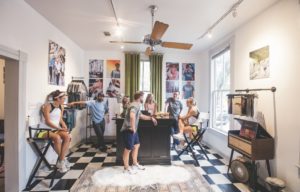 After getting involved with The Clubhouse on 6th, Whittle was even inspired to form her own community, The Clean Trail Club, which is dedicated to picking up trash on a few of Austin’s most popular running trails.

“It’s motivated me to be more active in the community itself,” Whittle says. “It makes me feel activated.”

Paras Shah, friend of Rosenberg and also a member of the Clubhouse Crew, says it’s been inspiring to see his friend’s passion and dream of the brand and clubhouse come to life in Austin, especially after making a career change.

“You walk in and it’s like a microcosm of Austin. So, you got a vinyl player, you got a music room — Austin’s all about live music,” Shah says.

Only a quarter mile from the Town Lake Hike and Bike Trail, The Clubhouse on 6th is frequented by pre- and post-runners needing a spot to set their things down or meet a friend for a workout, Shah says.

Directly in the entryway, there is also a set of black lockers to keep runners’ belongings safe as they journey out to the trail.

“It’s a nice hangout, that isn’t like a stuffy running store,” Shah says. “Will’s done a really good job on the interior of making it a place to actually sit down for 30 minutes and drink a beer with somebody.” 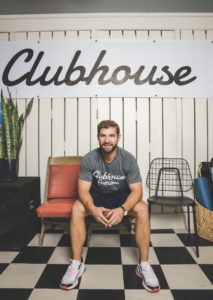 Shah says the brand’s mission also places an emphasis on giving back to the Austin community.

“What good is making money unless you’re gonna put it back into the community?” Shah says.

So far, Rosenberg has partnered with Back on My Feet, a non-profit dedicated to combating homelessness through running and community support, essential employment and housing resources.

“I really wanted to create something where I can give back,” Rosenberg says.

Rosenberg describes The Clubhouse on 6th’s community as a group of like-minded individuals that are not only dedicated to living an active lifestyle physically, but socially as well.

“I’d say that’s the kind of lifestyle — people that give back and care about the community,” Rosenberg says. “And also like to have a good time and appreciate and love everything that Austin has to offer.”