Firefighting is a career that’s universally regarded as heroic.

They’re real-life superheroes, pictured with red hats instead of red capes. When others run from danger, they are the ones running toward it.

It’s a job that pushes the members to their physical and mental limits, but those who do it wouldn’t trade it for anything else.

To be a firefighter, though, fitness and capability have to be top priorities and requirements. Every state and city might have its own regulations for how one can become a firefighter, but there is almost always a physical fitness test.

Like most, the process to become a firefighter in Austin, Texas, is demanding.

“We have some people on the force that had to apply three or four times,” Gottfried Chatfield, an Austin firefighter of five years, points out.

The process starts with an application to make sure the minimal requirements are met, and those accepted are allowed to take the written entrance exam. The exam focuses on how an individual works and what they are capable of. This is accompanied by the Structured Oral Process (SOP), an interview full of hypothetical scenarios and questions regarding skills that would be applicable to entry-level firefighter work. The SOP is a video interview, so that the answers can be scored and ranked along with the written exam. The top 200 scores go on to the next stage — the Candidate Physical Ability Test (CPAT).

“I like to call it the firefighter obstacle course,” Shelby Vollmer, an Austin firefighter of almost three years, says. “There’s stairs, carrying tools and ladders, confined spaces, the works.”

If the applicants make it through the stages and ultimately become a part of the Austin Fire Department, then the real challenge — and fun — begins.

“It’s an unconventional job,” Vollmer explains. “Not knowing what’s waiting for you on the other end of that call is one of the exciting parts.”

To train for this kind of job, it takes dedication and passion. The department requires an hour of some form of working out every day, in addition to any training or fire calls that may be done that day.

“The department helps us keep up with that policy,” Vollmer says. “If you’re at the firehouse all day, there’s equipment to use in your off time. But everyone has their own routines.” 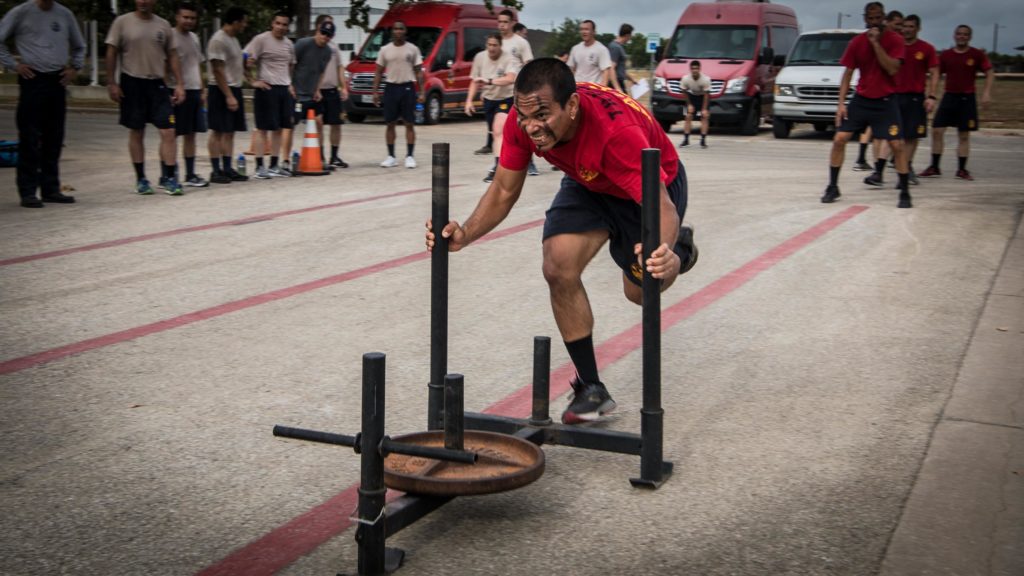 The training drills are run-throughs of the techniques and protocols they’ve learned for various types of fires, such as a high rise or roof fire. It can be running up the stairs to find the fire, moving the hose to the right side of the house, cutting holes in roofs for ventilation and more. All depending on what kind of buildings are available to be used for practice, most are those that are about to be torn down.

“It’s to create a sort of muscle memory for the real deal,” Chatfield explains. “So that in the heat of the moment you don’t forget anything.”

And it’s not just about practice that makes a firefighter good at his or her job. The physical fitness is not something to take lightly. Not only are they running back and forth with tools and ladders to race against the flames, but they are suited up in over 75 pounds of gear.

“Being on the smaller side, the gear is half my body weight,” Vollmer says. “It gets tough, but that’s where the training beforehand comes into play. You don’t want to get on scene and not be able to perform.”

The job of a firefighter can range greatly. Not knowing what’s on the other end of the call is the exciting and adrenaline-inducing part, but it’s also the exhausting part. The energy expenditure that coincides with adrenaline rushes can happen without even noticing until the job is over.

To add to all of that, being a firefighter in Central Texas means dealing with the extreme temperatures for a good portion of the year. The heat of a job doesn’t just come from the flames, but it can come from the 105-degree weather that can wear anyone down.

“The heat is the hardest part to train for,” Chatfield says. “You have to work out in the heat to get acclimated to it, otherwise your body could go into shock under all that gear and pressure.”

Staying hydrated is just another part of the job, Chatfield explains. He says he drinks at least a gallon to a gallon and a half of water each day and drinks coconut water throughout the week to ensure the days he is on the job, he is fueled up and ready to go.

Understanding the body, how it works and what it needs for peak performance at all times is important. A mix of cardio and strength training are necessary to fully get the job done.“You have to be extremely well rounded,” Vollmer says. “Some of our calls are just to lift people up and go down stairs. But at a fire, it’s more endurance. You have to go as hard as you can for 30 minutes, break and then go back to it. The body has to know how to recover quickly.”

Vollmer says she’s been doing CrossFit for seven years, and that helps her stay in shape for the job now. The incorporation of different parts of the body helps her to balance the strength and endurance sides of her workouts. Chatfield says he relies on all kinds of workouts, but his favorite when it comes to preparing for the endurance needed at a fire are sprints because of the quick bursts and the heart rate training it allows for, too.

“Some of the hardest times are when you get back from one call and get all of your gear off and you’re exhausted — and then another alarm comes in and you gotta go all over again,” Vollmer says. “It’s rare, but when it happens, you know it’s exactly what you’ve trained for. We’re here to serve.”

Even when times get tough, whether it be in a workout, training or a four-alarm fire, they both remember that the job is a selfless one. Having the community and the rest of their crew counting on them to get the job done means no days off.

“It’s not about me — it’s about someone else. In the end, it’s what I would want someone to do for me and for my children and my family,” Chatfield says. “And that’s the other thing, because I want to go back to my family at the end of every shift. So, I have to prepare my body now so that I am able to face what I can’t control.”

The Basics Of Bruxism