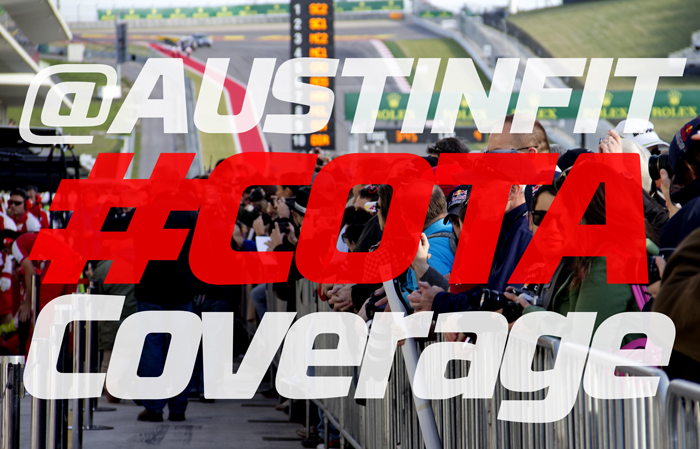 Formula One has returned! The track is coming to life on this somewhat blustery November day. Pit crews are checking the stacks of tires behind the garages. Much behind-the-scenes work is going on to get ready for the practice sessions on Friday and Saturday and Grand Prix on Sunday, November 17. Here's a quick look at some of the day's highlights.

What makes Formula One what it is is the sport’s focus on technology. The building of the car is of utmost importance, and there are very specific rules and regulations regarding the components of the vehicle. Everything—bodywork and dimensions, brake system, cockpit size, electrical system, fuel, to name but a few items—have regulations that specify their construction. Those regulations are detailed here (http://www.formula1.com/inside_f1/rules_and_regulations/technical_regulations/0 and it’s these technical aspects that differentiate between F1, F2, and F3 racing. There’s also weight to be checked—a car can be disqualified if it is found to be less than 640 kg (that’s almost 1,411 pounds). So who checks up on the cars? That’s where the scrutineer comes in. The scrutineer is a specially appointed expert who knows the safety and technical regulations behind F1. Scrutineers work in teams to examine every car on the Thursday before every Grand Prix (unless it’s Monaco, and scrutineering takes place on Wednesday there). If an accident happens or the pit crew makes some change to the car, the scrutineers must examine the vehicle.

Changes to the Circuit. At the FIA Formula One race director and team managers meeting today, it was announced that removable kerbs (that’s curbs, if you’re American) have been installed at Turns 3, 4, and 5; these approximately two inch high kerbs are similar to those used at Turns 8 and 9 in Abu Dhabi. Slightly smaller kerbs have been placed at Turns 7 and 9.

Driver Shake-Ups.  Today's press conference allowed the chance to hear from several drivers.  Pastor Maldonado is leaving Williams F1 team after three years as a principal driver. While he did not reveal where he’d be going, Maldonado said, “Leaving is an important moment for my career—improving every time, doing some solid races, trying to get the maximum from the team, trying to get the maximum from the car.” Felipe Massa, whose departure from Ferrari was announced earlier in the season, will be joining Valtteri Bottas as driver for Williams F1.

Fans from Mexico will have this opportunity to see Sergio “Checo” Perez before he leaves the McLaren team at the end of the year. Perez, who only had this season with the team before being replaced by rookie Kevin Magnussen, son of Jan Magnussen (former McLaren F1 driver) and a Formula Renault 3.5 champion, was philosophical about the change:  “With McLaren and the year that we have had, it was so disappointing for everyone; so they have had to make some changes and, yeah, they had to change me, and that’s racing.”

Esteban Gutierrez (Sauber) is expecting quite a large group of fans from his hometown of Monterrey, Nuevo Leon, Mexico, as it’s only about a five-hour drive from Austin. “I think it will be a really special feeling,” the young 22-year-old driver said. “I’ve not really experienced this before in my career, so it will be kind of like a new experience and I’m really looking forward to it. I think it gives great energy, great motivation to the weekend.”

Catching up with Alexander Rossi. A month ago, AFM had the opportunity to hold a Q&A with the up-and-coming American driver (“A Chat with Alexander Rossi,” November issue). Today, we stole a few moments with Rossi to get some photos and find out what his Austin experience has been so far. As the Caterham F1 reserve driver, Rossi will be taking the car out on the practice round; he spoke about the effect of the recent cold weather on the tires and how adjustments will need to be made after he shares the data gathered from his 25 laps. The handsome and quietly confident young man said he’d had fun at the FOTA Fan Forum event on Wednesday (“I came in third on the karting,” he laughed) and was managing to keep the media hoopla regarding an American presence at COTA at a minimum (“This is what I do, and I’m used to dealing with distraction”).  After the season ends, Rossi is planning to return to California—he said he was quite looking forward to the visit with his family, as it had been “four or five years” since he’d been able to be home for Thanksgiving. Awww…that made this mom's heart melt.

Austin Fan Fest Gets Underway.  Check out the various performances downtown at the six different stages that make up the Austin Fan Fest.  The fun starts 4 p.m. and the last acts start at 10:30 p.m.  It’s free, and there’s more to do for the whole family:  Go Kart Challenge, race simulators, autograph areas, food, and more.

Tomorrow’s COTA Schedule
The first and second practice sessions will be underway tomorrow (9-10:30 a.m. and 1-1:30 p.m., respectively). In addition, the Paddock Club will have a Pit Lane Walk.  The Formula Vintage and Ferrari Challenge cars will take the track for practice laps in the afternoon; the day concludes with the Marshal Pit Lane walk.

Previous Article
3 Crucial Ways That A Breast Cancer Helpline Can Help You
Next Article
For Health, Fitness, and Fun