With the lack of social interaction from COVID-19, many resorted to adopting a furry friend to join the family. According to Shelter Animals Count, an animal adoption tracking database, the national pet adoption rate jumped up 22% in April 2020 compared to April 2019. Texas, in particular, was one of three states with the highest intake rates in the nation in 2020, only second behind California, according to the database.

With more furry family members comes the need for more training, especially with more time at home when pets can become used to constant attention and interaction. Whether it be for convenience, to save money or to opt for more time with their pup, many may want to train their dog — and train them well — at home.

This month, we spoke with senior trainer, Adam Gates, at Sit Means Sit Dog Training here in Austin to learn the most effective ways to train your pup in the comfort of your own casa.

While dogs can begin training at any age, Gates says the best training window is between seven weeks to 20 weeks when social learning is happening, such as meeting other dogs, people and experiencing new situations.

In the beginning of training, Gates recommends starting with foundational skills such as sit, down and place commands, which is where an owner will tell a dog to report to a certain spot in the house.

“What I would recommend is [to]have little bait stations spread out around the house, with his cookies in a jar or treats up on the counter — that kind of thing. And anytime you are to walk past that area, you have your dog do a skill,” Gates says. “Whether it’s [where]you call your dog to come and sit or you have your dog down, but that way, consistently throughout the day, you’re having your dog practice training, but it doesn’t really affect your time.”

Find What Motivates Your Pup

“Not all dogs are treat-motivated. If your dog’s just eaten breakfast, he’s probably not that motivated by a treat. So, if your dog loves toys, using toys is a great idea. But initially, it’s about working in a quiet room, [minimizing]your distractions, [finding]something that motivates your dog,” Gates says.

Before trying to teach a command, Gates recommends playing with the dog for a moment so they are happy and paying attention to the owner. Then, place the treat over the top of their nose so they are looking up at the owner. This is likely to offer a position change, and once the dog has sat down, give them the treat and play with the dog again to reinforce the behavior that the owner likes.

“Typically, you don’t really want to label commands until you’re getting a consistent response,” Gates says. “And so, what I like to tell people is, ‘I don’t name it until I love it.’”

When teaching how to behave on a leash, Gates says it’s important that the dog first understands the boundary of the leash. 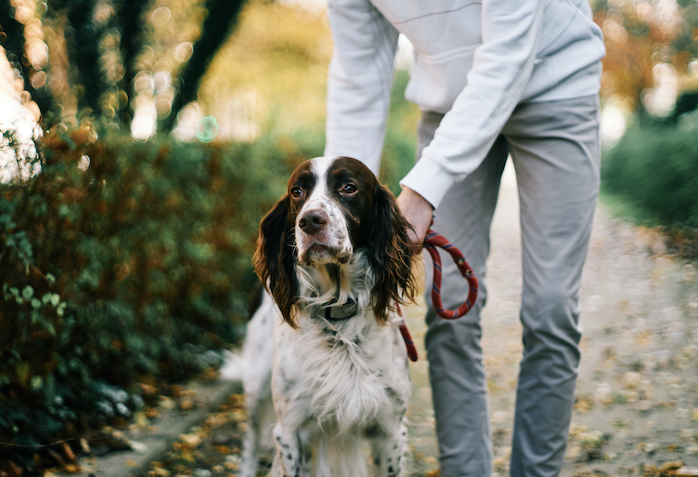 “One thing I like to do is clip the leash to my dogs, and start in a hallway or in an open room, and start moving forward with the dog,” Gates says. “The moment they start to pass by my feet, I’m going to start walking backwards and encouraging them with lots of energy, lots of cheerleading, so they start moving back towards me and then rewarding them when they get back to me.”

Gates says the reason behind this training is to teach direction change and to respond to the owner’s voice and movement, instead of relying on tugging on the leash to put them in position.

“If they’re going to be kenneled when the owner leaves, really teach them what that kind of space is. The kennel space shouldn’t mean isolation necessarily. So, one thing I like to do is teach a lot of drive to run to a kennel quickly, to lay down in a kennel, to practice training exercises inside a kennel so it becomes more of a training space; it’s a little bit more enriching,” Gates says.

Next, practice leaving for brief time periods and wait for the dog to settle before returning, Gates recommends. Then, when coming back inside, run over to the kennel, open it and play with the dog. However, Gates says it’s important that the kennel not be opened until the dog is calm, because this teaches the dog that, by relaxing, the dog is likely to get the owner back – instead of whining to get the owner back.

“The number one thing, really, is not to give up,” Gates says. “If you’re working and you’re having difficulty with a dog that’s struggling learning a new skill or something like that, scale back to something simple and end on a good note with your dog.”

Gates mentions there is no place for emotions in dog training, as frustration experienced by an owner can cause a dog to get frustrated, too, and answer that frustration in the form of negative behaviors such as biting, nipping or jumping.

“There’s really no point in getting very frustrated or upset, but rather just show the dog what a better option would be,” Gates says.

When to Seek a Professional

While dogs can be trained at home, Gates says that sometimes, owners will come across certain issues that are outside of their wheelhouse.

“Some of those more emotional issues — definitely seek out a trainer. Have them help you work through that,” Gates says. “It definitely needs to be a system where the owner is being coached on the training just as much as the dog is being trained.”

When going through formal training with a professional, Gates says having the owners being coached alongside their dog is just as important, because the training will likely not be effective if the owners don’t know how to handle certain situations or behaviors.

“There needs to be that kind of balance there. If you’re finding you’re working with your dog and you’re limited of time, or you’re having minimal success, your dog seems frustrated, you seem frustrated — seek out a trainer that’s going to help work with you to not just train the dog, but to teach you how to work through those moments,” Gates says.

Before Getting a Dog

It’s important to do research prior to getting a dog, because their breed is a significant indicator of what their temperament may be.

Gates also recommends analyzing one’s day-to-day activities, both during and after COVID-19. If someone enjoys going out on the weekends, Gates recommends getting a dog that is very sociable and high energy, and vice versa for someone who likes to stay in.

“One thing I like to tell people a lot is, the most aesthetic-looking dog is the dog that behaves the best,” Gates says. “So, don’t always pick the cutest dog in the shelter — pick the dog that seems to match you.”