Athlete Spotlight: Run for It 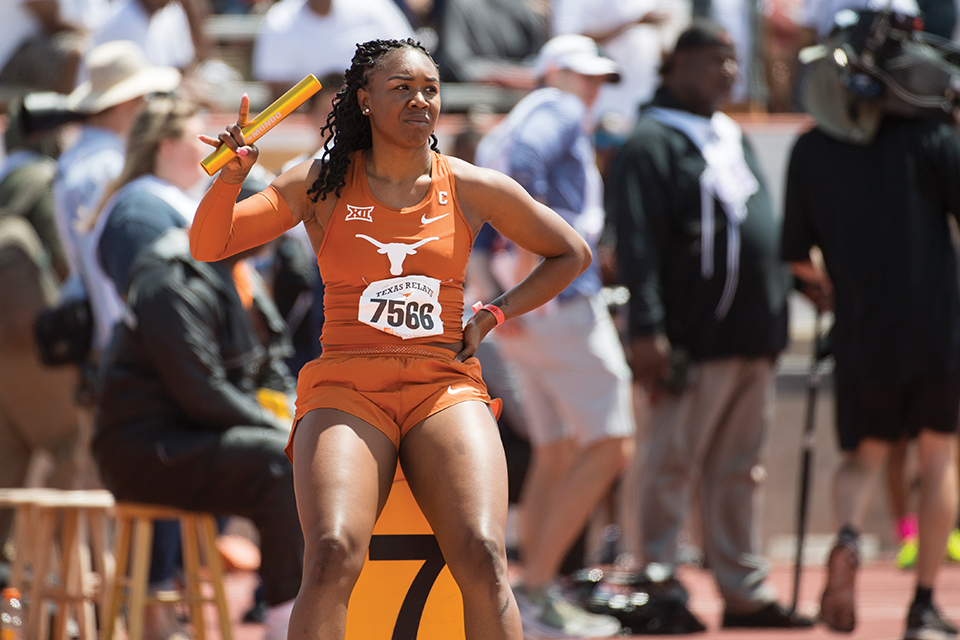 On January 26  2018, one of Teahna Daniels’ biggest fans, her father, passed away from a brain hemorrhage. At the time, it seemed like an unexpected blow to the athlete’s morale, but months later, she competed at meets like The Clyde Littlefield Texas Relays for him — and each win after that was in his honor.

Now, a little over a year later, sitting in the press box overlooking the Mike A. Myers Stadium on an unusually warm February afternoon, Daniels’ smile lights up as she describes her teammates and the upcoming annual Texas Relays.

This year marks the 92nd relays, and Daniels’ last as a Texas Longhorn athlete.  She started at the relays in 2014 as a junior in high school. She came all the way from Orlando, Florida, to compete in the DII high school girls 100m sprint. But she did more than just compete — she won with a time of 11:37.

“Winning that event in high school is still one of the greatest moments of my career,” Daniels says. “It’s what made me want to be a Longhorn — I had never been in a stadium so full of people and energy.”

Even having experienced that energy as a high schooler, Daniels says it still doesn’t compare to the feeling you get running for Texas. She describes how that feeling of family began to mean so much more to her after her father passed away.

“There’s nothing like wearing that Longhorn across your chest,” Daniels explains. “Knowing that the fans came to see you run.”

And with her career of Big 12 Championship titles and record-pushing times, Daniels continuously points to the support of the team and fans as her favorite part of it all.  She recalls how after she came back to Texas and  was greeted with so much love by her teammates. A care package of gifts and endless messages of support welcomed her home.

“There’s something about the love and support you feel,” Daniels says. “Especially out on the field during the Texas Relays — it just surrounds you.”

Her sophomore year in the Texas Relays, she experienced one of those injuries every athlete dreads — an injured quad. She was the first leg of the 4×1 relay, handing off to Courtney Okolo when it happened.

“I heard a pop and I went down,” Daniels says. “But I still got Courtney that baton. We always put the team first, we always get back up.”

Throughout the recovery process she was still alongside the team, supporting them every step of the way, just as they did for her when she finally got back on the track. And again while coping with the loss of her father.

Though she’s coming up on graduation from the University of Texas at Austin, Daniels is confident that Texas Relays will not have seen the last of her. Planning to run professionally, she looks forward to the day that she can return to the stadium that has meant so much to her over the years.

Yoga in the Age of the Alpha Male