Fit for the Fairway

When Paul Callaway was hired in 1984 as the first physical therapist on the PGA Tour, he’d drive up and park his fitness van at the tournament sites. It was outfitted with basic training equipment like weights and barbells, but by and large, the only things being lifted were eyebrows.“Not many players were keen on combining fitness and golf,” Callaway recalled.

The exception was Tom Kite, the energetic Texan who started playing golf about the same time he started grade school. Kite enjoyed a decorated amateur career, including a pair of NCAA team titles at the University of Texas in the early 1970s, and that translated to early success on the Tour. Yet Kite was still smart enough to see that power and distance were beginning to affect outcomes and, at 5-foot-9, he was curious to try anything to sharpen his competitive edge.

Kite became a regular at Callaway’s fitness van. If weather or logistics ever impeded Callaway from traveling to the tournament cities, Kite was known to track down the Tour commissioner and reiterate the importance of fitness and its proximity to the players.

“The exercise allowed me to compete against guys who were bigger and faster than I was,” Kite said. “If you’re truly trying to be great, not just pretty good, not just normal, then you have to take advantage of everything.”

His PGA career track is earmarked by consistency and coin. In more than three decades on the PGA Tour, he claimed 19 tournament victories, including the 1992 U.S. Open, and was a fixture among the top ten in the world golf rankings from 1989–94. Kite was the first player in Tour history to reach $6 million, $7 million, $8 million, and $9 million in career earnings.
Today, at 64 years old, Kite is surely retirement eligible, but he’s still a 7 a.m. regular at his local gym and actively competes on the Champions Tour, where he’s won ten times.
“Tom was—and is—the ironman,” Callaway said. “No one practiced more.”

The golf swing is a function of movement, a rhythmic coordination of torso and hips, hands and arms. The feet, while appearing to be stationary, actually propel the motion by driving into the ground to initiate the downswing and then absorbing the deceleration.

During his workouts, Kite works almost solely on lengthening his body to improve his range of motion. His hips need to stay flexible so he can rotate into his backswing and then whip the clubhead through impact. Following a warm-up of stretches and ladder drills, Kite moves into a series of circuits using cables and bands. Every movement is performed from a golf stance.

In golf, speed equals power. Kite even likens the bursts of a golf swing to that of a linebacker. Both require movements that are explosive yet precise. Just think about it—though a round of golf might take four hours, Kite will only spend a matter of seconds actually swinging clubs.

“As you get older, you don’t lose strength,” Kite said. “You lose flexibility.”

Kite has found a way to fight the inevitability of time through fitness. Back in the late 1990s, Kite struck up a friendship with then-newly named UT basketball coach Rick Barnes. Exercise was a common topic, and Barnes eventually introduced Kite to his team’s strength and conditioning coach Todd Wright. Though Wright didn’t have any experience working with golfers, the two hit it off. Wright’s father was a golf fan, and Kite was intrigued by Wright’s global view of the body and its movement. 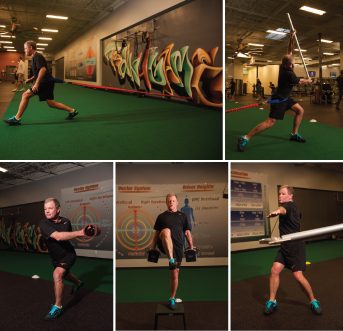 Tom Kite works out at Austin’s Train 4 The Game under head trainer and general manager Chris Braden, whose methodology matches training to a human structure living in a three-dimensional world. Each workout globally addresses flexibility, mobility, stability, balance, strength, and power. Here, Braden breaks down the principles to keeping Kite in top condition.

“Tom is one of a kind when it comes to his desire to maximize his potential,” Wright said. “His burning desire to compete and win is matched by few athletes I’ve ever worked with. Maybe Kevin Durant.”

Wright assembled a training plan for Kite that was more than just squats and presses. It accounted for movement in all three planes of motion, a philosophy that works particularly well for someone swinging a club. Kite lost body fat, while gaining muscle and distance off the tee.

“He’s an early adopter,” said Chris Braden, who studied under Wright and is Kite’s hands-on trainer. “It’s the key to the sustainability of his career.”

And it goes back to Callaway and the fitness van all those years ago. Frank Jobe, a golf fitness pioneer who authored 30 Exercises to Better Golf, orchestrated a study at a California hospital, and Kite and Callaway submitted to being probed and prodded. Electrodes were inserted to specific muscle groups, and, wearing nothing more than his skivvies, Kite went through a series of golf swings, which allowed the testers to see what muscles fired during the swing and when.

“I’m a type A personality anyway, so that’s just fertilizer on the yard. That was cutting edge stuff back then,” Kite said. “I’m always trying to find a way to be better. People talk about how much I practice. You can’t do it unless you’re in shape. You’ll break down. I’m 64 years old and as fit as can be.”

FAQ: Guidance for working out your healthy conundrums

Refuel and Recover with Protein