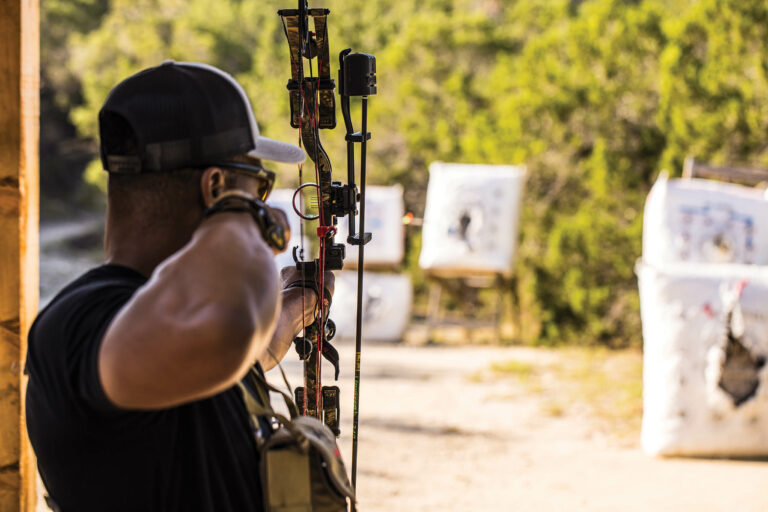 Hello AFM! We have another local gem to share in our quest to showcase Austin’s mecca of fitness. This month’s tour brought us to Austin Archery Club (AAC), where beginners to accomplished archer enthusiasts can get their fix. This haven encourages safety first, community and outdoor engagement!

Ambassador’s Corner is continuing efforts to support the Central Texas Food Bank. We sincerely thank you for your continued participation in the work to keep Austin fed as every donation counts as we work to increase food access to families in need.

Austin Archery Club is a nonprofit organization, originally formed in 1982. Although a more informal club began shooting at other local locations, the Austin Archery Club moved to Emma Long Metropolitan Park around that same time to use parkland with a national wildlife refuge that is now a part of the Balcones Canyonland Preserve.

The Club is funded through membership fees, shoots and tournaments, and in-kind donations from visitors and local businesses. Donations from local archery shops come in the form of instructional equipment and tournament prizes, as well as their volunteered time and effort. Without their support and communication to their customers about the Club, it could not have grown and maintained itself over its last 40 years of existence!

Over the past few decades, the Club maintains static ranges and courses for its members year-long, including bag targets, field archery targets and 3D targets.

The static ranges have bag targets placed at known distances from 10 to 60 yards. This is a great area to fine-tune your skills while working on the precision and accuracy of your shot. If you’re shooting a traditional recurve bow, the Field Archery Course has 14 targets set up in a style established by the National Field Archery Association (NFAA). If you choose to shoot a compound bow, the Bowhunter Course has 30 lifelike 3D animal targets set up to match guidelines utilized by the Archery Shooters Association (ASA).

The Austin Archery Club holds memberships in both national archery organizations. Throughout each year, the club hosts several tournaments that are open to the public, as well as introductory group youth lessons. The Club is entirely an outdoor facility and sits on property that is covered in trees and includes both small hills and ravines. While the terrain offers good exercise for those seeking to break a sweat, there are also several accessible level areas if you’re less interested in hiking. The facility is certified as compliant with the Americans with Disabilities Act (ADA) and welcomes archers with special needs, specifically partnering with Lone Star Paralysis. They also support a national sober active community called The Phoenix. Additionally, free memberships are offered to all current and former members of the military!

What I liked: I appreciated starting at the static range to calibrate my equipment and get dialed in for the 3D course. The importance of taking time to check in with your equipment serves as a safety measure, and it can save you a good deal of money if you are not having to replace lost arrows — all I’m saying is the cost of replacing arrows adds up quick!

Also, I incorporated wearing a pack as I navigated the terrain. The addition of the pack functions to aid in training aerobic capacity, providing you the ability to cover more ground. However, another purpose of incorporating a pack is to simulate conditions in which you need to execute a precise shot while winded because as fatigue settles in, it becomes increasingly challenging to maintain the laser focus and consistency needed to keep your shot on target.

What I found most challenging: Oftentimes, the limiting factor for me at Austin Archery Club becomes physical. My shoulder talks back after about a dozen shots, and sometimes you need that many shots to calibrate your equipment. Hiking in between targets helps in keeping limber and loose, but in my last three shots, I’m usually laboring and am due for some treatment and recovery — still well worth it, no doubt.

Archery is a fun sport for all ages and abilities, with the Club membership including archers from teens to seniors. The facility and events are family-friendly, as both practice and competitive groups often include kids, parents and grandparents.

In addition to modern compound and traditional longbow/recurve archery, the Club is also utilized by a local group called Austin Kyudo that practices a form of Japanese archery. With this diversity of ages, styles and abilities comes the need to prioritize safety, which the Club takes seriously. Time-established safety practices are written into a formal safety policy, which is published and made available to all members and guests, and the ranges and courses are reviewed to ensure the facility is safe for all who use it.

The connectedness to nature, respect for the land and an amazingly welcoming community are just a few of the shared values experienced among any Austin Archery Club member. The love for archery and promoting the sport is the cherry on top.

Check it out online at austinarcheryclub.com where you can access a virtual tour video, information on available ranges or courses and scheduled events, necessary rules and prohibitions, a convenient online method for becoming a member, and links to other local archery resources.

We hope to see you out there!

Best Parks in Austin for Working Out

The Mission Behind the Bark Ranger Program