Troy Schlicker, realtor by day, wasn’t expecting much more than a good workout when he responded to a Craigslist ad looking for those interested in starting a sand volleyball team for Aussie’s Grill & Beach Bar’s spring league of 2010.

He’d been in Austin for a few years by then and had been trying various forms of athletic outlets to meet people and stay active. He responded in hopes it would be an interesting change of pace from the typical flag football and basketball leagues.

Schlicker, who has lived up north most of his life and grew up playing basketball, hadn’t even considered the sport before, let alone knew where to find it in Austin. But after a game or two of playing, he was hooked.

“That’s what’s great about the community. You don’t have to be a world class player,” Schlicker says. “You can just go out with a team of friends and have a beer and be active.”

Before long, he was training to make his way up the skill levels. Going from a team of six to a team of four, and now — about eight years later — competing at the top level in doubles.

“I never intended it to be something that I take super seriously,” he says. “It wasn’t until I realized I enjoyed it that the competitive nature kicked in.” 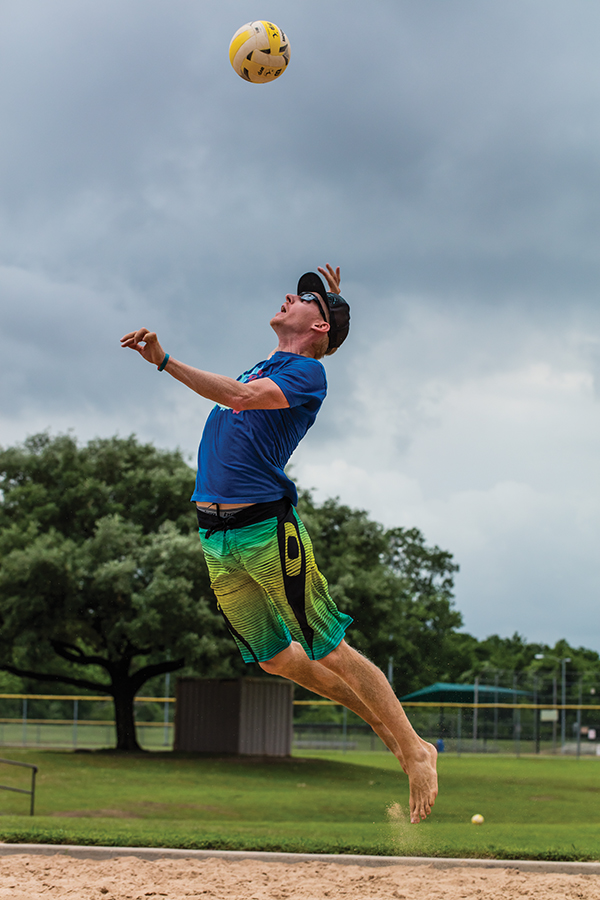 The story of Schlicker’s passion for sand volleyball has a lot of common threads for other players in Austin, like Chris Olds, who came across the sport in 2011 after his own career with competitive basketball.

“I knew things were changing when I started showing up to basketball games covered in sand,” Olds says. “I was playing beach volleyball five to six times a week [one]year after I started.”

His interest extended all the way into opening his own local beach volleyball company, 512 Beach. It started out as just him and a teammate training other players by word-of-mouth.

In 2015, after an injury, Olds was asked to run a tournament for several members of the community. The first year, 512 Beach ran two tournaments. The following year it increased to eight and continued to grow.

“Last year we ran over 60 tournament dates with over 120 divisions,” Olds says. “That’s more than any other individual organization in the country!”

The main differences with sand volleyball and court volleyball are team and court sizes. As skill levels increase, the number of players on each team decreases. Courts are smaller in order to accommodate the small team sizes, and the sand creates resistance for movement.

The sand, though it adds resistance, actually provides an interesting benefit for athletes as it softens push-offs, landings and quick dives. This eases tensions and impact on joints compared to gymnasium floors.

“I’ve always noticed the cushion it creates on my joints,” Schlicker says. “You can go hard on the sand and not feel as strained in the end.”

No matter how long you’ve been playing, there is always a challenge that comes when stepping into the sand. The extra balance it requires means high demand of both legs in jumps and landings, as well as some relearning of movements — which can be challenging even for avid indoor players.

“Our bodies are amazingly resilient and adaptive,” Schlicker says. “But every sand court is different based on depth — it takes getting used to.”

Aussie’s Grill & Beach Bar, which opened in 1989, is one of Austin’s oldest and well-known spots for sand volleyball leagues in the city. The venue hosts tournaments from March to November, weather permitting, and offers volleyball camps, clinics, leagues and court rentals. As the sport has gained traction, so have opportunities to play, including places like Austin Sports and Social Club, ATX Sports + Adventures and Wooly’s Beach, all offering various opportunities to compete.

Most, but not all, of these organizations base leagues and divisions on skill.

“With more players on the scene and interested in playing, each skill level is getting deeper,” Olds explains. “Even with new tournament formats aimed to accommodate everyone, we still have wait-lists for almost every 512 Beach event.”

Austin is also featured as a stop in the Association of Volleyball Professionals, the largest professional beach volleyball tour in the United States. It will be held this year on May 17-19 at Krieg Fields. Spectators can watch some of the top sand volleyball players in the state and all over the country.

Donald Sun, the AVP managing partner, says the association has already seen the involvement of sand volleyball grow within the city of Austin. In just three years, numbers at Krieg have increased continually as word has spread.

*Editor’s note: This story was written and printed prior to the AVP tournament. Follow avp.com for next year’s tournament dates.