Fitness in the Name of Service

The life of a first responder is a physically challenging one. There is the equipment of rescue, which does not carry itself to the side of a victim. Adding to this are the challenges:  steep terrain, rushing water, and inhospitable climates, to name a few. Then, there are the patients themselves, who must be lifted and carried with the utmost care in the most indelicate and challenging situations imaginable.

Picture a car upside down over a steep embankment with a victim trapped inside. An emergency medical technician (EMT) crawls in to render care and comfort while the fire department cuts the car to pieces around both of them—this scenario gives some small idea of the hectic, chaotic, stressful reality of being part of a first response team. To meet these challenges, many who make a career of serving others commit to a lifetime of fitness.

McLain participates in a rappelling exercise.

Kristin McLain has served her community for 14 years as a nurse, eight of those as a flight nurse on rescue helicopters. When she moved to Austin in 2008 to work for Travis County’s STAR Flight, one of the premier programs in the country, she didn’t know about the fitness requirements.

It is common for EMS flight programs to have weight requirements, and some even have height requirements. Travis County’s STAR Flight is one of the few in the country to begin an interview process for a candidate with a fitness test. Those who don’t make weight are turned away without proceeding to the 300-meter swim and 1.5-mile run, which are followed by a lifting, moving, and agility test. These basic fitness standards only scratch the surface, because those hired then undertake a rigorous training program that lasts several weeks and includes rescue swimmer training, land rescue training, and swift-water rescue training.

McLain, who was competing with other applicants just days after applying for the job, had little time for preparation. This nevertheless posed no obstacle, as swimming and running are two of her favorite forms of exercise. Combining these with biking, another favorite activity, has made her a perfect candidate for triathlons, and McLain has completed 14, including an Ironman in Panama Beach, Fla.

Since moving to Austin, McLain said she has added several other components to her fitness routine. She has employed a personal trainer and taken up high intensity interval training (HIIT), which builds strength and endurance using kettlebells (among other things). She also builds endurance with punishing hill sprints. In addition, McLain enjoys several water sports, including rowing, paddleboarding, and wakesurfing.

When Tropical Storm Hermine descended over Austin in September 2010, it dropped more than 16 inches of rain over Williamson County and northern Travis County. It was in the middle of the night, standing on the skid of the helicopter directly in the face of that storm, that McLain’s physical strength and mental acuity were put to the test. She and her crew rescued five people trapped by rising floodwaters: a family of four, rescued from the second story of their flooded home, and a man who was barely clinging to the roof of his submerged car when plucked from the violent, rising waters.

Never one to be satisfied with past accomplishments, McLain recently opted to do a 3-mile timed course while carrying a 45-pound pack instead of the standard run during her last annual STAR Flight physical qualification test. 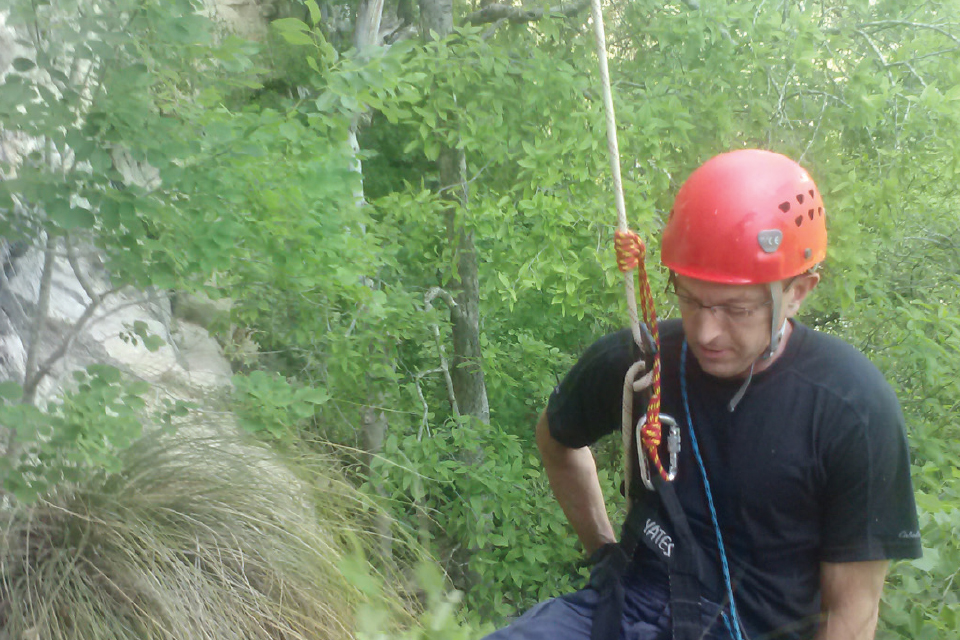 Scott White was a runner in high school, and speed and stamina have built him well for a lifetime of service.

White joined the United States Air Force in 1982 and after rigorous Special Forces training, served in the Combat Control Team. These elite teams interact with Army Green Berets, Rangers, and other advance troops to set up air traffic control in forward combat zones. His unit was alerted for the invasion of Grenada. During his tour of service (a time of major tensions between the U.S. and then-USSR), White was deployed twice to the polar ice cap to support missions that were monitoring Soviet nuclear submarine activity.

After being discharged from the military, White was hired by the Tacoma Fire Department, serving 21 years as a firefighter and paramedic. When Tacoma firefighters aren’t running calls, regular training exercises designed to build stamina and strength were the order of the day. Typical activities included hauling 150 feet of fire hose up seven stories while wearing full turnout gear and an air tank on his back—about 80 pounds of equipment. White, meanwhile, weighs about 150. He recalled several incidents when the stamina and experience he’d developed proved useful. One day, White was called to strip out of his turnout gear to swim to a submerged vehicle in a chilly river to search for victims. Another test of physical ability involved hauling an unconscious 250-pound man out of a burning building.

When he came to work for STAR Flight, White was older than most of his colleagues in Austin, but he’s become one of the strongest swimmers on the crew. His comfort in the water and ability to thrive in physically demanding and psychologically stressful circumstances were an asset during the Halloween floods in October 2013. White, dangling on a rope some 80 feet below a STAR Flight helicopter, rescued 12 people from the rising waters that day, including three sheriff’s deputies and two dogs.

The first life Meredith Garee ever saved was her own.

At 13, Garee was diagnosed with an aggressive form of leukemia known as Burkitt’s lymphoma. Fighting the disease required a seven-month hospital stay that caused her to miss the eighth grade and lose virtually her entire muscle mass. She also lost most of her fine and gross motor skills; writing was a challenge, and simple childhood activities like running were out of the question.

Garee undertook physical therapy as others might undertake climbing a mountain, and by the time she was in high school, she had become a competitive tennis player.  In college, Garee played intramural sports and was competitive with people her age, a remarkable accomplishment considering her starting point.  Yet she was not satisfied.

At Texas A&M, Garee studied biology and community health, intending to learn more about what was happening to her body and help others as well. In 2008, she began working as a paramedic for Austin-Travis County EMS (ATC-EMS), mostly on the night shifts. Those four years with ATC-EMS presented unique physical challenges for Garee when it came to staying in shape. She refused to reverse her body’s clock and relinquish her love of daytime activities. Garee kept her daytime eating schedule and spent her days running and going to the gym as well as regularly and repeatedly climbing the steps to Mount Bonnell while wearing a weighted vest.

This last workout routine helped prepare Garee to transition to the fire service in 2012. There, she encountered a mainstay of physical and mental endurance at fire academy training—tower drills. Garee remembers these drills with a fondness that only someone who had overcome her unique types of physical challenges could.

Garee now works for the Austin Fire Department and spends her free time biking, running, and rock climbing with her husband. They also participate in the daily workout routine published on truckroom18.blogspot.com, a workout site designed by fire fighters.