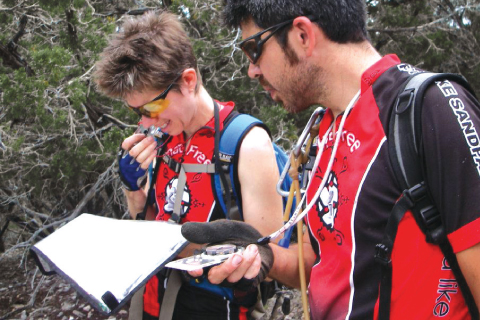 Team Phat Free was conceived over cheese fries and beer at the old Filling Station in January, 2004.  My best friend, Joshua Crixell, and I were not your typical athletes.  We were more like wannabes who had tried a few mountain bike races here and there.  Overweight, we led busy (and sometimes bordering on bacchanalian) lives. When we weren’t working full-time, we were in class trying to chip away at our college degrees. Joshua and I were just a couple of young adults trying to cram for exams, make a living, and insert some sort of fun into our everyday lives.

Following a frigid winter, mountain biking season loomed right around the corner. I had all but thrown myself on the ground kicking and screaming over the thought of participating in one more mountain bike race so when the time came to sign up, my answer was “no.”

Joshua had other plans for us.  From his proverbial back pocket, he pulled out the idea of the two of us competing in a multi-sport race he’d read about (the Balance Bar Adventure Sprint) to be held at Muleshoe Bend in Spicewood, TX.  Though exact distances were kept secret, marketing flyers boasted running, paddling, mountain biking, and a multitude of “special tests” that would challenge teams both physically and mentally.  This was our first induction into what we now call an adventure race.

I was “in,” 100 percent.  We had less than five months to prepare, so we tackled the most important thing first: a team name.  I cannot recall all of the highly-creative ideas that flowed between us, but I do know that “Phat Free” morphed out of “Fat Free.”  The name was intended in the spirit of self-mockery, as we were on the chubby side.  To add a clever twist, we changed the spelling to “phat” because, at the time, “phat” was slang for cool; again, lightheartedly mocking ourselves, we thought, “We’re not phat, we’re phat free!”  We weren’t really expecting the name to last past this one race.

The next day, Joshua and I started gathering as much information as we could about the race: What are “special tests?”  Do we need a boat for the paddling section?  Is there free beer at the finish line?  We asked friends who had done triathlons for advice on how to train for multi-sport events.  We reached out to bike forums and websites and even contacted the Balance Bar race directors online. We discovered that the race was designed to be around four hours long, with winning teams finishing in under two hours. We would be riding the Muleshoe trail, which we knew to be roughly seven miles long, and boats, inflatable Sevylors, would be provided.  No beer, though, unless we brought our own.

Armed with this information, we devised a training plan that seemed, to us, ingenious.  Since we knew the route at Muleshoe was about seven miles, we estimated we would most likely be running some part of the trail; to be safe, we needed to train up to running at least seven miles.  We bought an inflatable boat much like the one that was to be provided at the race but not as fancy, figuring that, if we could learn to effectively paddle it, we would have no problem with the Sevy.  We heeded advice from our triathlete friend, Charlotte Morris, who introduced us to the concept of brick training (practicing two or more disciplines back-to-back in order to help the body adjust to transitions, such as from running to riding) and so forth.

We started off slowly.  I remember going out to Walnut Creek Park and running for twenty minutes and being exhausted.  We paddled the inflatable nightmare up and down Lady Bird Lake, spending most of our time trying to make the boat go straight rather than in circles. We rode our mountain bikes for an hour, threw them in the back of the truck, and took off for a short run. As a result, we were losing weight, becoming stronger, and devloping a sense of commitment that further energized us to throw all of ourselves into this race.

The day before that first adventure race, we attended the pre-race meeting. We learned that the race would start off with a 7-mile trail run followed by a 1.5-mile paddle and nearly 12 miles of mountain biking, all of which would be peppered throughout with special tests.  The only special test we were allowed to see was a 15-by-15-foot wall that we as a team would need to figure out how to climb.

Team Phat Free not only survived the race, we placed 17th out of 34!  I know that some people never moved forward with adventure racing after that day; it just wasn’t their thing.  Joshua and I, however, never looked back.  We immediately researched all of the adventure races we could find in Texas.  The next one, a 12-hour race east of Dallas, had winning teams that finished in eight hours.  It took us 16 hours, but that didn’t stop us.  We built upon the lessons learned and kept finding and signing up for more challenging events, recognizing our love for not just adventure racing but endurance sports in general in the process.

Having become more serious, we had some custom jerseys designed.  They were nothing fancy, just our team name and a logo we drew up.  Across the sleeves and down the sides of the jersey was our slogan (which we jokingly stole from a DJ Jazzy Jeff and Fresh Prince song), “Rough like sandpaper, hard like algebra.”  Joshua and I liked the logo so much we had it tattooed on our arms.  I reached out to Pure Austin Fitness for support, and they offered to sponsor us with a gym membership, which was extremely helpful due to the large amount of expense entailed in adventure racing.  We went on to compete in a variety of events, such as cycling time trials of up to 1200K, a 72-hour adventure race, several 24-hour races, endurance trail runs, and yes, even mountain bike races.  Along the way, we’ve added team members who share our passion.  Quite different from our first finishes, we now typically place in the top five of most of our events; we’ve also won many of them.  We still drink beer, though not as much, and we’ve gotten quite fit.  And while we’re not fat anymore, we’ll always be “phat free.”

Tips from Team Phat Free
“Adventure racing? Is that like a triathlon?” Sure—but it’s more like a triathlon on crack! Yes, you can expect to run, ride, and even swim during an adventure race but these sports just a drop in the bucket. In fact, the main discipline of adventure racing is navigating (using a topographical—or topo—map and compass), basically trying to get from checkpoint “A” to checkpoint “B” via foot, bike, boat, water, ropes, caves…the list goes on. After all, it’s an ADVENTURE!

At our first adventure race, we were stopped by the race director just fifteen minutes into the course; we were obviously going the wrong way, as in there were no checkpoints where we were heading. The race director took one look at our map and led us back to our transition area. He asked us if we understood how to plot coordinates onto a topo map. We both shook our heads, “no.” In the spirit of our typical behavior, we’d thought we could just “wing it.” We were given a quick lesson on how to plot coordinates and were sent on our way; this time, in a more appropriate direction. With this example in mind, starting off with a beginner-friendly race and getting acquainted with (and bugging the heck out of) veterans is the best way to learn this absolutely necessary skill. It’s what drives the whole race (or wrecks it).
A great way to find beginner-friendly races is through word of mouth. We are huge fans of Too Cool Racing (http://toocoolracing.com/). This is not a "plug"; we feel they put on, by far, the best "real" adventure races and tailor them to fit beginners as well as expert teams. The "sprint" races are called sprints due to their length (they are shorter) but still pack in all of the disciplines one would expect to find in the longer adventure races. Here are a few coming up:

Other than talking one or two friends into doing a first race, there are a few resources where "newbies" can reach out to people in an effort to find teammates. However, I highly suggest roping in a good friend if you can. You'll have more fun experiencing the stresses and excitement of a multi-sport race with a close buddy who won't hate you after you've (inevitably) fought over some decision-making during the race. If you can’t find a friend or loved one who wants to try this out, these sites are good starting points:

See Jane Paddle is a social club comprised of competitive/recreational paddlers, a lot of whom also do adventure racing. They welcome anyone who’d like to join their weekly sessions (usually on Lady Bird Lake) and are very VERY beginner friendly.

Too Cool Racing provides boats, though experienced teams can bring their own. The list below is the beginner essentials for an adventure race:

• Bike (preferably a mountain bike, as most riding is done on single-track and dirt roads)
• Bike helmet (mandatory)
• Camelbak (or something comparable) with at least 50oz hydration bladder
• Trail shoes
• Sunscreen
• Duct tape
• Ziploc bags (can protect your map/clue sheets)
• Appropriate clothing for the weather (change of clothes if you don’t like staying wet)
• FOOD – anything you know you can eat ON THE GO (our favorites are: Cheetos, Payday candy bars, peanut butter and jelly sandwiches, oranges, bananas, and beef jerky). You burn a lot of calories in these races, so pick foods you know you’ll eat over a bunch of Gu’s/gels/bars (unless you really will eat that stuff over a multi-hour event).

The best advice I can give to a beginner is this – have fun! Adventure racing is not a snooty sport. It is a multi-discipline sport that constantly engages the mind through navigation and “special tests.” It’s a team sport, and other teams will stop to help you even though they, too, are racing. The end results are some swag, beer, and awards to those teams who really brought game. But if you go in too seriously and stress out over every decision in the race, you may never do another.

It’s No Waltz Across Texas