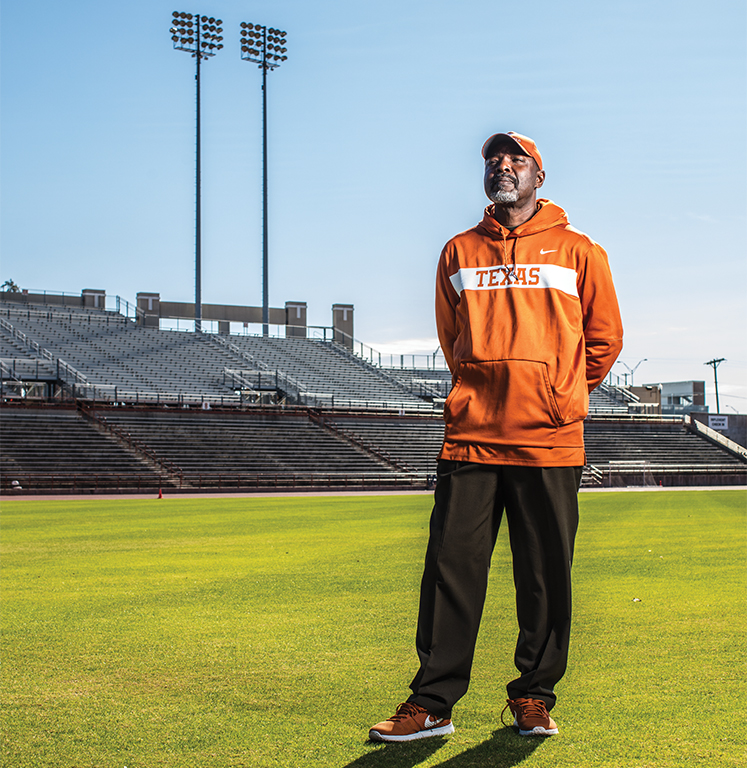 The University of Texas touts an athletics program known for its longtime tradition of winning across the board. From football, volleyball and baseball to swimming and track and field, UT has produced some of the nation’s and world’s greatest athletic talents. Additionally, some of coaching’s most distinguished names — Darrell Royal, Jody Conradt, Augie Garrido and Eddie Reese — earned respected reputations at UT.

There is a saying etched in the walls of many prominent locations across the 40-acres, “The pride and winning tradition of the University of Texas will not be entrusted to the weak or the timid.”

The responsibility now rests with new head track and field coach, Edrick Floréal, to carry on this tradition.

Hired by Texas in June 2018, Floréal vividly recalls walking into the Moncrief-Neuhaus weight room for the first time and reading the epigraph. Impressed by the boldness and audacity of the statement, Floréal quickly internalized the words, and realized they encompass everything he wants to be as  a coach.

“I was delighted to be in a place that values coaches and athletes in their pursuit of excellence,” Floréal says. “[I was] also happy to be in a place with the resources to make it happen.”

Hailing from French-Canada, Floréal is former National champion and Olympian in the long and triple jump. He graduated from Arkansas in 1990, where he was the NCAA’s premier triple jumper. A five-time national champion, sweeping the indoor and outdoor triple jump titles in 1989 and 1990, he won his first NCAA title in 1988. Floréal was named an All-American nine times while at Arkansas and was part of four NCAA team championships. He also won six Southwest Conference titles with five victories in the triple jump and an indoor long jump crown in 1990. He remains the number three performer in the triple jump, indoor and outdoor, in school history and was inducted into the University of Arkansas Sports Hall of Honor in 2012 and the Southwest Conference Hall of Fame in 2017.

Before arriving on the 40-acres, Floréal accumulated 25 years of coaching. He was an assistant at the University of Kentucky from 1996-1998, then moved on to Stanford for 14 years, with the last four as head coach. In 2012, Floreal returned to Kentucky, this time as a head coach where he transformed the program from peripheral to a literal track powerhouse.

When Floréal took over in Lexington, UK was coming off an eighth-place finish by the men and 12th by the women at the SEC Outdoor Championships. The Wildcats also had never earned a team trophy (top four) at the Women’s NCAA Outdoor Championships. Over his six years at UK, Floréal led the women’s program to three top-four finishes in the last four years, including a runner-up showing in 2015.

His international coaching resume, however, is just as impressive.

Floréal was named head coach of the 2015 United States men’s national team and has coached multiple world champions, including Kori Carter in the women’s 400m hurdles, Omar McCleod in the men’s 100m hurdles and guided Keni Harrison to break a 28-year-old world record in the 100m hurdles.

Harrison describes “coach Flo” as hard-working, determined, genuine and loving. She recalls her experience after failing to make the Olympic team in 2016 as one of her worst moments, but credits having Floréal in her corner as the reason she was able to break the world record in her very next race.

“He’s patient with me,” Harrison says. “He knows how I learn and what makes me better, and he goes to every extreme to help me get better. He customizes drills for me and films every one of my practices. The day I competed in London, he told me I would break the world record. He said my numbers were the best they had ever been, and although I never lean at the end of my races, he wanted me to lean and the record would be mine — I still can’t believe he was spot-on.”

Harrison’s progress to world record- holder is attributable to the attention and tutelage of Floréal. Undoubtedly, she’s also the beneficiary of the experience Floréal gained coaching his first world-class athlete and life partner, his wife, LaVonna Martin-Floréal — a 100m Olympic silver medalist.

Floréal learned a great deal from coaching his wife. As an athlete, he knew what worked for him, but it was a different experience coaching others, specifically the needs of his female athletes.

“I must say I am one of the few men that survived coaching my wife for six years while keeping a happy and successful marriage for more than two decades,” Floréal says. “LaVonna provides an invaluable resource to all my female athletes. She makes herself available to them in every way and provides insight from a female perspective that I could never give.”

Twenty seven years ago, Martin-Floréal asked her husband if they could live in Austin. With no obvious reason to move and no job opportunities at the time, Floréal didn’t agree it was a good idea at the time. But Martin-Floréal’s burning desire to move to Austin remained.

In 2014, when Floréal asked his wife where she’d like to retire, once again, she mentioned Austin. This time, in a better position to make his wife happy, Floréal obliged. And the two purchased a home just a few miles away from campus.

When Floréal was hired at UT four years later, he was glad he trusted his wife’s instincts.

“Marriage is a partnership — I’m grateful that my wife has trusted me to lead our family and supported me to be the best father and coach that I can be,” Floréal says. “In turn I trust her to make the best decisions for our family. It was a no brainer for her to pick our retirement home. For me, it shows just how in tune she is with my goals and aspirations as now we get to move in a few years early.”

Martin-Floréal has believed in her husband since day one, and feels he is the perfect person to be the new head coach of the Longhorns.

“He’s a winner in every sense of the word,” Martin-Floréal says. “He loves a challenge, knows how to rise to the occasion and thrives under pressure.”

Floréal believes UT presents the best opportunity to coach some of the best athletes in the country and is excited to pick up the mantle and rebuild a legacy of excellence and dominance that was once the norm for the track and field program.

“I’m not sure what success will look like for me at Texas,” Floréal says. “Surpassing coach McDonnell at Arkansas with 40 national championships? Well, I believe I’m in the right place to do it, but once I get there, I’ll only want more for the university, for my team and for myself.”

It seems the legacy and the winning tradition of The University of Texas track and field team is in good hands.

How to Stay Motivated to Workout In Winter