The Freedom of Oral Immunotherapy

Most people may recognize the scene from the famous 1987 movie, The Princess Bride. The courageous and witty Dread Pirate Roberts, also known as Westley, claims to have built an immunity to the poisonous iocane powder after winning his childhood love, Buttercup, back in a battle of the wits.

While this fairytale is no more than a made-up story filled with adventure and romance, it is not too far off to think Westley’s ability to build a tolerance to this poison can actually be done. In fact, a process called oral immunotherapy (OIT) does just that, and Major Jaimes, a seventh grade boy from Austin, went through the treatment for his severe dairy allergy — then wrote a book about it.

Second of four, Major was born with many allergies which caused him to have hives and rashes all over his body. Besides dairy, he grew out of most of them.

After a friend suggested trying a hydroxylase formula which acts as an amino acid base to break down the formula, Major’s mom, Jill, says within a week he was much better.

“We realized, though, even when someone would eat chocolate and then kiss him on the cheek, he would end up with a big hive on his cheek,” she says. “Over time, we realized he was severely allergic to milk.”

Their family adjusted to keep their home safe by living a dairy-free lifestyle. They give up foods like macaroni and cheese and Goldfish crackers to accommodate for Major. Jill learned to bake and cook dairy-free, and Major went to school with friends who learned about his allergies and always looked out for him.

Nonetheless, Major says it was annoying to have to constantly watch out for dairy when he went out with his friends. Even food that was cooked in the same pan as dairy could result in an allergic reaction.

“I remember one time in fourth grade, someone had a birthday during school and brought popsicles with lime and coconut. The coconut had dairy and the lime did not,” Major says. “The first popsicle I had was lime, but the second time was coconut. I only had a few licks but didn’t like it, so I gave it to my little brother.”

Later, Jill saw her son with puffy lips and connected that Major must have had a coconut popsicle. They went to the nurse and were given an EpiPen before calling his allergist. 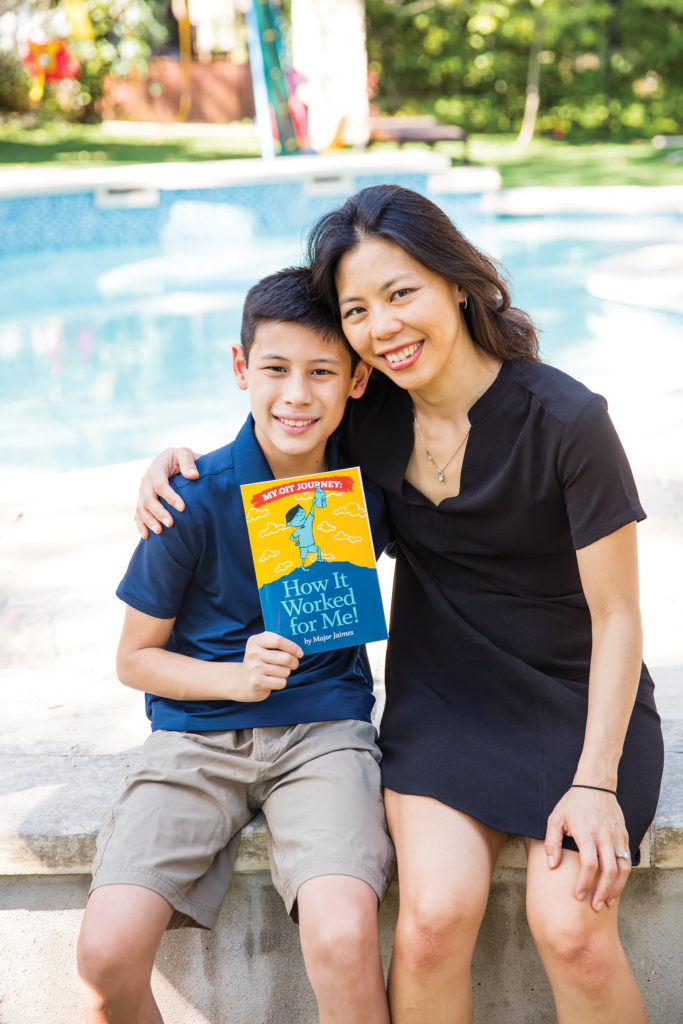 A year later, Jill and her husband began reading into OIT, or oral Immunotherapy.

OIT treatment is a process where patients are given small, incremental amounts of the food allergy to decrease sensitivity over a period of about six months, according to Texas Allergy. The primary goal of OIT is to be able to consume a full serving (of the allergen) without experiencing a reaction.

“When he [Jill’s husband] sent me articles, we searched online and found a doctor who was from Dallas and transitioning to Austin who was doing one clinic day a week,” Jill says. “So we just lucked out that we happened to have someone available when we were looking.”

Dr. Stacy Silvers is one of the few allergists in the country who offers OIT and serves the Dallas and Austin area. Major started oral immunotherapy with Dr. Silvers in fifth grade.

“When my mom and dad first mentioned it, I thought they were literally going crazy,” Major says. “It sounded scary, I mean, your parents telling you to eat what you’re allergic to so that you’re not allergic to it anymore. That was kind of hard for someone my age at the time to think about.”

Major wrote a book titled My OIT Journey as a resource for kids with allergies. His hope is to educate kids on the process of OIT and help them decide if it is something they want to try.

In Major’s book, he documented his successful journey with OIT. From starting the process only by drinking a few tiny drops a day to drinking 3 ounces of milk every day, Major can now drink and eat dairy products.

Major says OIT impacted his life a lot since he no longer has to ask questions in the cafeteria and he can eat anything he wants to eat.

“My dad kept talking about the ice cream Moose Tracks, and I kept thinking he was lying about it until I actually tried it,” Major says. “It’s great! Reese’s Pieces are good, too. Man, and pizza.”

Jill says from a family perspective, OIT is a win for them all.

“It has been amazing to give everyone the freedom to eat dairy, and for me, I don’t have to worry about having a panic attack anytime he goes to a sleepover or on a school field trip,” Jill says. “It always brings tears to my eyes to think about how much it has changed for everybody.”

JoEllen Clark, a friend of the Jaimes family, developed an egg allergy after having children. A few years before she began OIT, she talked to Jill about Major’s experience.

“I read about it about seven years ago, but at that time there was no doctor in Austin, and it all seemed experimental,” Clark says. “When I talked to Jill about what Major was doing, it gave me an opportunity to actually know someone who had gone through it. So, that kind of spurred me to go ahead and try it.”

Like Major, Clark says her OIT process was also relatively smooth, finishing the four-phase treatment without any significant issues. However, she says there were a couple times she still needed an EpiPen throughout her process.

After taking the daily dose of the allergen, a patient is required to participate in a two-hour observation period with the goal to keep the core body temperature stable as the body digests and metabolizes to allergen. High activity and mobilization may cause a reaction to occur.

One day, after Clark finished breakfast with friends where she had some scrambled eggs, she says she didn’t think about the eggs she had earlier that morning and decided to go for a walk.

“Of course, I was already pretty far away from the house before I started having reactions, and that kind of scared me straight,” Clark says. “It was really early on, and I wasn’t being as careful as I should have been, you know. There is a two-hour waiting period, and you shouldn’t mess around with it.”

For some, this two-hour period may be a barrier for people doing OIT. Texas Allergy recommends to take the dose about an hour before you start getting ready for bed. Reactions, however, are different for each patient.

For Major and Clark, OIT was a successful journey. While they still need to take a full dose of their allergen everyday in order to continue building their immunity, Clark says it is worth it.

“I am seeing how much allergies can mentally affect people. It is a real stressor on their everyday lives,” Clark says. “So, this is a huge relief in that sense. It is definitely worth it — once a day to take a little bit of something in order to not worry about what I eat.”