Austin Fit > Articles > AFM > Could you ask for a better day at Circuit of The Americas?

Could you ask for a better day at Circuit of The Americas?

You could ask for a better day for Formula One racing but you probably wouldn't get it.

The weather was perfect for F1's return to the United States. Austin's own Circuit of The Americas looked beautiful and the festivities were flawless. The track had been warmed up by two preraces, the Pirelli GT3 Cup Trophy (USA West) and the Ferrari Challenge. The Porche 911s took the track with a steady hum; the modified Ferraris brought the decibel level to a ferocious roar.

Race day ceremonies kicked off with the traditional parade of drivers. Each of the Formula One team drivers circled the 3.4-mile track riding in a vintage convertible. Following the parade, several parachuters, one with the American flag attached, wafted gently through the air, landing near the main grandstand. Irish tenor Dr. Ronan Tynan, an athlete himself (from 1981-1984, he participated in the Paralympics, winning 18 gold medals and setting 14 world records, nine of which still stand), sang a beautiful rendition of "God Bless America." And every Longhorn fan's heart stirred to see none other than the Showband of the Southwest, the University of Texas Longhorn Band, march down the track and assume formation in front of the main grandstand to play several songs, including "Deep in the Heart of Texas" and a rousing arrangement of "The Eyes of Texas." 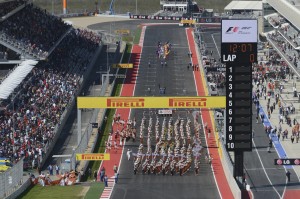 Following the musical selections was a flyover provided by the Air Force Heritage Flight Foundation, which included one F-16 Fighting Falcon ( a modern-day, multi-role fighter aircraft that can fly more than 500 miles), two vintage P-51 Mustangs (widely used in WWII as escorts for B-17 and B-24 bombers), and two P-38 Lighting, another WWII aircraft that shone in the Pacific theater.

Clay Walker, a Beaumont native, sang the national anthem (and is currently performing a concert on the venue grounds). The F1 cars lined up, Sebastian Vettel (Red Bull) in pole position, Lewis Hamilton (Vodaphone McLaren Mercedes) in second, and Mark Webber, Vettel's Red Bull teammate, in third. For 56 laps, the drivers battled for position. There were bumps, slides, exciting passes, and the final results were close. Hamilton nosed by Vettel late in the race, eking a win by .06 seconds over the Red Bull driver, who clinched the 2012 Constructors' title for his team. Vettel also posted the fastest lap of the race (1:39.347, with an average speed of 199.772). Ferrari's Fernando Alonso, who posted the best Sector 1 time (27.177), came in third, just 39.2 seconds behind Hamilton. The Williams F1 Team had an intense inter-team battle, with Maldonado nearly bumping tires with Senna to secure ninth place, just ahead of Senna's tenth and gaining three points for their team. Senna will be racing at home at the last Grand Prix of the season on November 23-25, the Grande Premio Petrobras Do Brasil.  Visit Circuit of The Americas for complete Grand Prix results.

The traffic is still wending its way out of the venue, but all reports suggest that Austin's Circuit of The Americas more than delivered on race day weekend. Well done, y'all!

Farm to Table Benefits are Endless