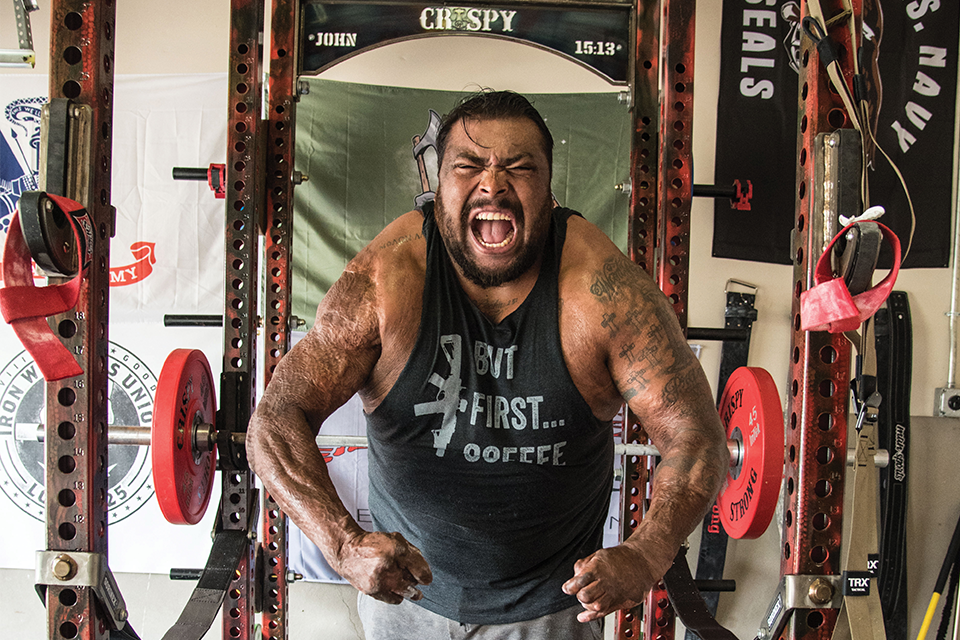 “My story is a success story more than anything,” says Sergeant Omar “Crispy” Avila, a recipient of the Purple Heart, Combat Infantry Badge, and numerous other awards with valor.

Omar Avila was sitting in his ninth grade history class when he made the decision to join the military. It was September 11, 2001 and planes had just struck the World Trade Center. Feeling overwhelmed with an enormous obligation and desire to protect his family and country, he decided at 15 years old that he needed to help. On his 18th birthday, he made that commitment official, enlisting in the U.S. Army as an infantryman.

In 2004, Sgt. Avila shipped out to Iraq for what would be his first and last deployment. It was one of the most volatile periods of the Iraq War, with each day bringing heavy combat and casualties. Nearing the end of his 11-month deployment, Sgt. Avila’s platoon was sent on a final mission to patrol through Adhamiyah, an area of Iraq with limited American presence and, at the time, the last known location of Saddam Hussein.

As Sgt. Avila’s group moved through the streets, the last Humvee in their convoy was struck by an IED. Shockingly, the only damage incurred was a flat tire. They kept moving, pushing forward. But the initial IED was part of a much larger ambush. As they advanced into enemy fire, Sgt. Avila’s vehicle drove over a 200-pound IED. This time, the damages were catastrophic.

Having hit their fuel tank, the resulting impact was so explosive it sent their near 8,000-pound Humvee six feet into the air. One teammate was killed instantly, while other soldiers leapt from the vehicle. They were stuck in the middle of the kill zone.

Without hesitation, Sgt. Avila climbed into the turret of his Humvee, now engulfed in flames. Manning the mounted machine gun, he provided cover fire for his teammates, suppressing the 30-40 armed insurgents surrounding them. “I was aware of being on fire, but was far more concerned about the other guys,” says Avila, who unwaveringly remained at the gun, firing round after round, protecting his men as the fire raged.

Eventually the vehicle grew so hot that  grenades and other ammunition began to cook off before he could even fire them, forcing Sgt. Avila to jump from the roof of the burning vehicle, breaking both of his femurs on impact.

Instincts kicked in and he began rolling in the dirt, attempting to extinguish the flames now enveloping his body. In the seconds that followed, time stood still as he lied in the middle of the road, alone, weapons firing all around him while his teammate sprinted to grab a fire extinguisher. The last thing he remembers is being wheeled through the hospital in Iraq, shouting to his buddies that they would see each other again soon.

He woke up three months later at the VA hospital in San Antonio with no memory of leaving Iraq. Two of his fellow soldiers had died. Avila had sustained life threatening injuries and been placed into a medically induced coma. More than 75 percent of his body was covered in third and fourth degree burns and part of his right foot had been amputated. But against all odds, Avila was alive.

The weeks that followed were harrowing. Avila endured a grueling daily routine of skin graft treatments, requiring the injured skin be debrided so the new skin underneath could grow. Nurses would take him to the shower, peel off his bandages—an unimaginable pain itself—and begin scraping away his skin with what he says looked like a metal bristled grill brush. This went on for months. The pain was so excruciating he would pass out during each session for the first month and half.

Nine years and 102 surgeries later, Avila beat the odds, and is thriving as a motivational speaker, professional power lifter, and daily inspiration to thousands.

With the self-imposed nickname “Crispy,” Sgt. Omar Avila has found enduring optimism and even humor in his unfathomable situation. “I’ve seen a lot of other guys worse off than I am, and seeing them happy and smiling and having a positive outlook on life makes me think, ‘If they can do it, why can’t I?’”

But he concedes that maintaining optimism does not always come easy. “You have to work for it,” he explains. “There are definitely moments you start doubting yourself and telling yourself you’re worthless. Survivor’s guilt is very real. You start wondering why you survived and others didn’t. But the moment you let those thoughts take over—you’re done.”

“The guys who never made it back are my motivation,” he says. “It’s a constant reminder to be happy to be alive. It’s a gift. We take for granted that we get to wake up every day.”

A year ago, Avila had to have the remainder of his right foot amputated due to cancer. A week later he was back at the gym. Today, Avila holds the Paralympic world record in both deadlift and bench press. “I wanted to accomplish something that had never been done,” he says.

“Motivating others is what motivates me. The thing about burns—it’s not a disability. It’s just a little challenge, but I don’t think we would call life ‘life’ if it were easy,” he says. “There are always going to be challenges. These are the times we find out who we are. You just have to remember there is always a greater outcome,” he says.