You are at:Austin Fit»AFM»Introducing Your Next Skincare Obsession: Light Therapy

Light has always been a resource humans look to for restorative energy. However, it wasn’t until the early 20th century that light was discovered as a resource for therapy. In 1903, a scientist named Niels Finsen was given a Nobel Prize for his findings on the “therapeutic and physiological effects of light treatment from artificial light sources,” according to the U.S. National Library of Medicine.

Fast forward to 2020, and one of the latest trends on the beauty and wellness market is light therapy, and more specifically, tools and masks with different colored LED lights designed for skincare and rejuvenation. It’s common to see these new gadgets flooding social media feeds along with influencers recommending various skincare products and LED devices — here’s why.

“It’s a light-emitting diode, so it’s a certain wavelength that each color has and can penetrate in certain areas of concern. These masks are great because, one, it’s really not harmful for the skin. It just helps with the combination of skincare and treatments,” Stephanie Molina, lead medical esthetician at Rejuvenate Austin says.

“Red light is the most common, because it stimulates collagen and elastin, and that’s just kind of everyone’s go-to because, starting at the age of 25, we start losing collagen,” Molina says.

Yes, blue light at night is known to interrupt your sleep schedule (enter: blue blockers), however if you suffer from bad breakouts, blue light may be able to help.

“Blue light is an antibacterial, so it kills bacteria and helps to clear any blemishes on the face and control breakouts,” Molina says.

Many LED tools on the market come with the option for just two lights, blue and red, because both can work together to fight acne. Blue light targets blemishes, and red light can reduce inflammation and redness, according to an article by Harvard Health. 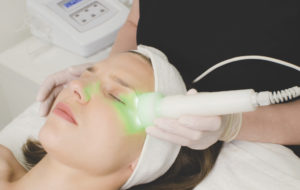 Just as your diet needs its greens, so does your skin.

Green light helps with pigmentation and also helps even the complexion of the skin by breaking up discoloration, Molina says.

In addition to skincare, green light has been found to reduce chronic pain, such as migraines and fibromyalgia, according to an article in MDedge.

If you’re looking for the best light for recovery, try yellow light. According to LaserClinics.com, yellow light penetrates deep into the skin and is best used for wound healing, skin rejuvenation, rosacea and redness. Yellow light also helps to remove toxins (from the area being treated) and can stimulate the lymphatic system.

Maybe you messed with that pimple a little too much. Or, maybe you’re experiencing some inflammation after your regular trip to the medspa. Either way, purple light could be here to save the day.

The purple light wavelength is used to calm irritated skin and can be a helpful aid after a procedure, Molina says.

“There’s obviously a difference in the medical grade ones that the spa uses and the home ones, as far as how deep the wavelengths can go. So, there’s just a little bit of a difference in that aspect, but ultimately they can do the same thing,” Molina says.

For safety, Molina recommends wearing protective eye gear while using light therapy, as some colors can be damaging to the retina. In addition, it’s recommended to not directly place the light to the skin and to use each light in 20-minute increments.

“Just hover as close as you can to where you feel the warmth of the light, depending on the medical spa ones. You just kind of stay under, and it sits on top of you, and it’s not really close, but I think the wavelength is stronger,” Molina says. “If it’s a smaller handheld or mask, you can control the distance.”

Even though light therapy is beneficial for the skin, Molina says it is more effective when used in combination with other skincare products.

“Standalone, it might be very slow to see a benefit in it, but if it’s in with other combinations, it’s great,” she says.