More Than the Miles 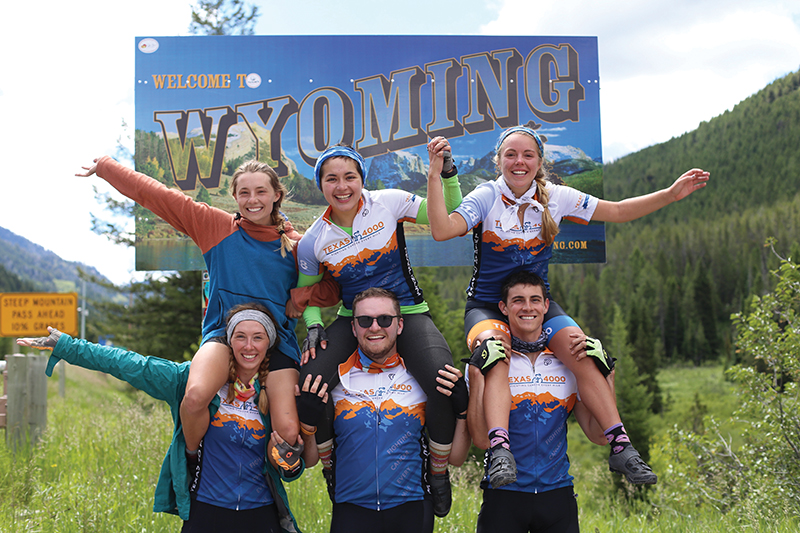 The Texas 4000, a 4,000-plus-mile bike ride from Austin to Anchorage, Alaska, does inspiring work in the fight against cancer. It awards grants to cancer research organizations across the country, chosen by its alumni board of riders and current team members, and also establishes a means of awareness and knowledge as each team is constantly giving presentations on cancer prevention and warning signs in the stops along their respective routes.

But underneath the tangible, there lies much more than just money or recognition. In 2004, founders and engineering majors at the University of Texas at Austin Chris and Mandy Condit, took it upon themselves to create the organization to spread hope, knowledge and charity throughout the country. The student riders that have followed have found that within those 4,000- plus miles lies a secondary mission that changes lives in another sense.

Rachel Boaz, a neuroscience major and now UT alumna, is just one of the 69 Texas 4000 2018 team riders. During a brief stop in Duchesne, Utah along her team’s route, Boaz recounts one brief interaction that she says exemplifies this underlying vocation of the ride.

“We stopped in a McDonalds for a rare luxury breakfast when a man stopped us on our way out and asked about our jerseys,” Boaz says, “This was a common occurrence so by then we had mastered the elevator pitch of Texas 4000.”

Boaz and her team explained the nonprofit’s reputation for having the longest annual charity bike ride in the world, granting over a million dollars each year for cancer research, awareness and support groups. As routine, the riders always ask those that they meet if they have anyone that they would like them to honor during their ride.

The man paused before confessing his wife had passed from cancer just five years before. The team, proficient in handling such situations, began to comfort and offer condolences.

“He burst into tears. I was taken aback and even he seemed surprised at himself,” Boaz recalls. “He kept saying, ‘I’m sorry, it’s just…I haven’t talked about her in years. I don’t talk about her. I’m sorry.’”
“We never got her name, but I thought about her the rest of the day, the rest of the summer,” Boaz says. “Examples like this are why we do what we do. We were the secret-keepers, a bridge of vulnerability for strangers to talk about those they have lost to this ruthless disease.”

Laura Sorto, an advertising and sports media major and now UT alumna, recounts the dedication and passion it takes for an applicant to make it from the initial submission of an application all the way through to day zero when the team embarks for Anchorage from Austin.

Even after the judicious selection from the application pool and rounds of interviews, those that make it are still not guaranteed the ride. They are required to attend weekly meetings and be involved with their assigned route team—Rockies, Ozarks or Sierra—through every step of the planning. All the while, each member is expected to individually volunteer a minimum of 50 hours, raise $4,500 and log 2,000 hours of biking by specific deadlines.

“It seems like a lot, but it makes you learn to manage your time and prioritize your mission,” Sorto says. “Some feel like they’ve taken on too much and drop, but it had been my second time applying and some their third. I had wanted this for so long I was willing to make the sacrifices I needed to in order to see it through.”

Sorto even recalls the team missing the occasional Texas Football game day for the weekly meetings, as well as turning down internship opportunities in order to fit in the time to log bike hours and volunteer work.

“I don’t regret a thing,” Sorto says. “In the end I realized there would be other jobs, other game days, other life experiences, but nothing like Texas 4000. Nothing compares to the lives you touch and the bonds you make with your team.”

Sorto tells one story that she says will forever stick with her as an example of how you just never know what someone is going through until you understand the power of asking and listening.

“We were in the middle of nowhere in Canada and stopped at a random gas station just for a quick break,” Sorto says. “A boy, about five, came up and asks what our shirts are for.”

The Sierra team was able to explain their mission to the boy, Denver, and his father. But things changed once they mentioned their journey of “fighting cancer every mile.”

“Denver looked up at his dad and said, ‘Cancer, that’s what Mommy had, right?’ and the whole conversation paused,” Sorto recalls. “We had no idea this happy little kid had lost his mom to cancer, or the husband his wife.”

“We rode for Denver that day,” Sorto says, “I still tear up every time I think of that day and the way he waved goodbye as we rode off.”

Elizabeth Hill, a senior journalism major, describes a similar encounter when scouting for breakfast one morning with the Rockies Route team.

At a convenience store while she was asking for donations, Hill connected with the woman working there and ended the exchange asking if there was anyone the woman wished the team to honor during their journey.

“She burst into tears saying, ‘I don’t know why I’m crying, it’s been thirteen years. My mother, Valerie, passed away from cancer,’” Hill recalls. “We both cried, prayed together and remembered her mom.”

Moments like these are what keep the spirit of Texas 4000 alive within each member of the team, even after they retire their jerseys. And while money is essential to finding a cure, these stories are what the Texas 4000 is truly all about.

“Wearing our Texas 4000 jerseys is like an all-access pass to people’s lives,” Hill says. “They will tell you anything if you’re wearing it, because they know they can trust you to care and to carry their stories with you — it means the world.”