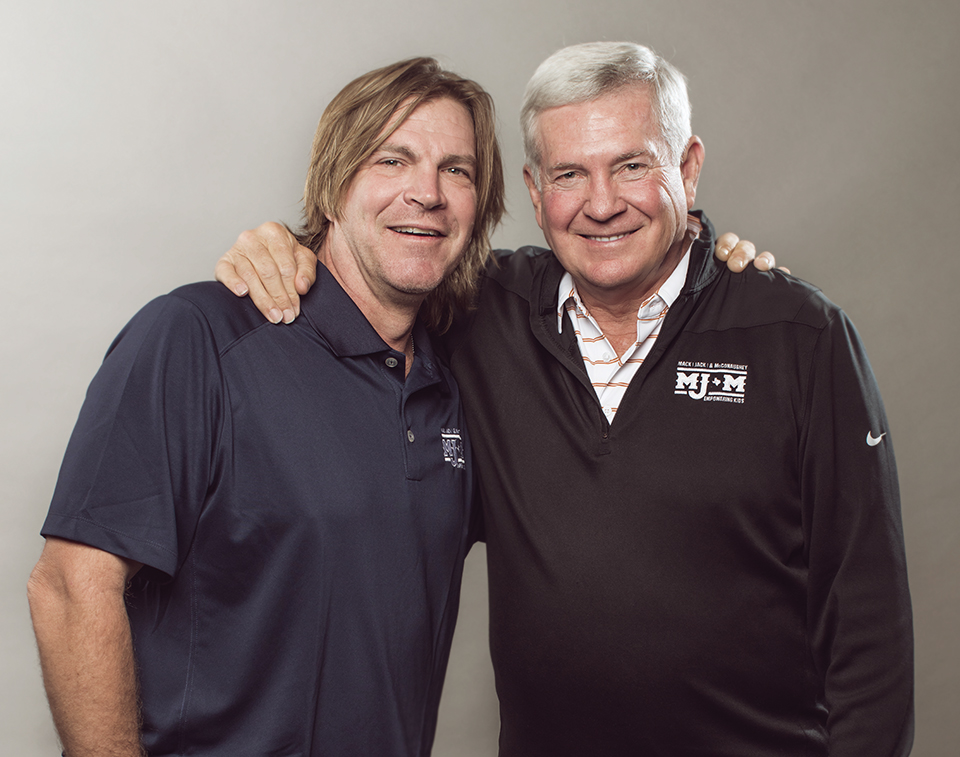 Mack Brown receives many texts. They ping the ESPN commentator’s phone night and day, adding lines of dialogue to conversations days, weeks and even months long. Few of those messages however, would impact his life as much as a 1 a.m. blurb from country music artist Jack Ingram.

A bit of a night-owl, Ingram was awake one late night reminiscing about a Ben-Willie-Darrell gala he’d attended in is his youth. Willie Nelson had always been a major influence for him, and he wanted to put together an event in the spirit of that celebration — an event that was just as memorable as it was charitable.

That’s when the text went out.

After the text popped into Brown’s phone, he jumped on board right away. He would later continue the conversation with actor Matthew McConaughey. After lunch and a beer, the three formed Mack, Jack & McConaughey, or MJ&M, a two-day event dedicated to youth education, health and wellness in Austin and beyond.

MJ&M’s first year, 2013, started with few expectations. They just hoped they would make enough to break even. But as more and more bids started ticking upwards at the silent auction, their doubts were soon extinguished. After that, they were a runaway success.

“When we launched…in 2013, we just wanted to engage guests in our mission and have a good time,” Brown says, “We were hopeful we would have a strong fundraising outcome, but we didn’t really know what to expect.”

They netted around $900,000 that year with their two-day extravaganza of music performances, golf tournaments and fashion shows by top-notch designers.

“This was the beginning of a really good thing,” Brown says. “[It’s] truly the most anticipated charity event in Austin.”

In just five years, MJ&M has raised almost $10 million for organizations like the Rise School of Austin, the Just Keep Livin Foundation and the Dell Children’s Medical Center among others.

“There is a great need in our communities, the country and across the globe,” Brown says.

Hosting the gala in Austin was a no-brainer for the three. Each of them have deep connections with the city either through college, sports teams or musical affiliations. It felt only natural to base it in a place with such a breadth of collective history.

“We all wanted to do something here in Austin,” McConaughey says, “A home-base event where instead of traveling the globe to fundraisers we could bring everyone here and give back here.”

That coming back, year after year, is part of what makes MJ&M so fulfilling for the guys.

“Yes, our work has us on the road often,” Brown says, “but our roots are here, and this is where our heart is.”

For Brown, hosting the gala strikes true to those roots.

“My G-dad was my mentor,” he says, “I spent most days with him and loved him very much.”

Among the many lessons grandfather Eddie Jelly Watson taught him, the greatest Brown learned was to, ‘Always do what you know is the right thing to do.’ Utilizing that dedication is the driving force behind Brown and his involvement with the event.

Along with their wives Sally Brown, Amy Ingram and Camila Alves McConaughey, the guys aim to embody Watson’s fundamental teaching and maximize their impact in a place they all call home.

“This is our backyard, our community,” McConaughey says, “and this event is an extension of our outreach right here in it.”

When Ingram looks back, his favorite moment is still that first event.

“[That] first time we walked on stage and saw our dream become reality,” he said, “feeling the energy in the air and knowing the entire city was coming together for a great cause.”

Each year they try to recreate that feeling of togetherness for their guests and themselves.

“I wanna make sure we put on a hell of a show and a good time each year for everybody that supports us at MJ&M,” McConaughey says.

Part of their success is undoubtedly tied with their connections to industry leading professionals. In past years, they’ve recruited musical talents like the Dixie Chicks, Little Big

Town and Toby Keith. And they don’t skimp on the fashion end, either. Jason Wu, MILLY and Alice + Olivia have all made appearances and contributions to one show or another.

And those performances have started attracting a different crowd, because as their event has grown, the attendees have evolved. Event coordinator Jennifer Horn Stevens says that an Aston Martin auctioned for $50,000 at the first event would clock in around $150,000 to $200,000 today.

Despite the glitz and glam, MJ&M is, and always has been, about the kids.

“The amount of money raised must always match and meet the needs of the children we’re able to help,” McConaughey says.

Where they’re united in approach, each has their own focus in fulfilling those needs. The Browns place an emphasis on CureDuchenne and the Rise School of Austin, which dedicates itself to providing quality education for children of all abilities.

The Ingrams lean toward a more musical approach with Grounded in Music. The organization aims to provide musical education to underprivileged youth at a time when music programs across the country are being slashed.

The McConaugheys support their Just Keep Livin Foundation. Through health and wellness programs, JKL works with local schools to help students learn about the mind-body connection and to ultimately make life-positive choices.

The six are just as energized now as they were when they started.

“We’re not done yet!” Mack Brown says. “We don’t see an end in sight and will keep MJ&M going as long as we keep having fun and helping kids.”

And as  each new year is added on to the last, McConaughey notes that he wants to maintain their high standards of performance.
“I want to continue to see our quantity match our quality,” he says.

It takes dedication to turn a text message into an annual, multi-million dollar bonanza, but it’s work the six seem to enjoy. For a brief moment they’re able to play host to Austin, entertaining guests of both local and global origin.

For them, this event is more than just dinner and a show, or a round of golf and high-ticket auction. It’s a celebration of home, of bringing together the living elements that make a city breathe in order to aid the less fortunate. It’s about helping and having a good time, because why shouldn’t giving back also be fun?

The 2019 MJ&M will be April 25-26
Check out  mackjackandmcconaughey.com for more details.

Previous Article
The Bar Method Workout
Next Article
No Pain, No Gain…Wrong