Austin Fit > Articles > AFM > Dinner and a Date—with a Language

Dinner and a Date—with a Language

In a small commercial kitchen, three women huddle around a stainless steel island worktop. Clad in aprons and hovering over a spread of fresh ingredients, they tilt their heads up as students make their way into the classroom. Each is greeted with big smiles, as if being welcomed home for dinner by his or her mother, sister, and grandmother. Instantly, each feels comfortable in this kitchen. This is a class different from any other.

Cooking Up Spanish is a nonprofit organization that teaches Spanish to non-speakers by way of cooking. Its predecessor, Cooking Up English, was founded in 2010 as a way to teach English as a second language through a supportive, edible, and interactive environment for learning. The inspiration came from a five-and-a-half month trip that founder Casey Smith and her husband took to Chile. Immersed in a foreign language, the experiences garnered from that trip motivated Smith to help others in her home community experiencing similar challenges. In 2013, Smith added Spanish classes, and more additions are planned for the future. “The goal is to broaden communities’ multicultural compassion,” said Smith, who ultimately wants to teach each official language of the United Nations. Up next? Russian. After that, Chinese, Arabic, and French. 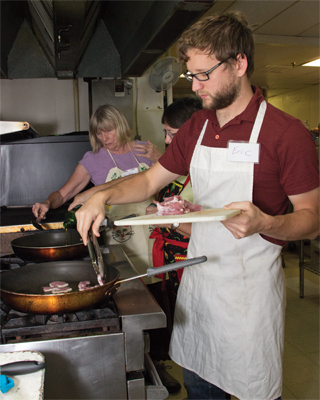 So how does the class work? Students pay $175 for a five-week long series of classes. Each series includes five, 2-hour classes, all along the same culinary theme. The most recent series focused on tapas, with a different tapas-themed menu each class. For example: The menu on semano cuatro (week four) was Solomillo al Whisky y Espinacas con Garbanzos (Pork Tenderloin in Whiskey Sauce and Spinach with Chickpeas). Since the class’s inception, themes have included tropical foods, Latin breakfast, and will soon feature holiday meals. But this isn’t the same cuisine found at the neighborhood Tex-Mex restaurant. Incorporated into each menu are fresh, local, and organic foods, and a selection of authentic dishes from a variety of Latin American countries including Columbia, Mexico, Brazil, and Chile.

Class begins with the teachers, Angie Mishoe and Marina Spears, giving assignments to each student in Spanish. This is an immersion class, so English is not allowed. Instead, students are each given a certain number of permisos (passes) to use when in dire need of an English translation. The number of permisos received is at the discretion of the teachers. If they think the students can be challenged, only one permiso may be given as opposed to the average three per person. But this is an open, collaborative, and helpful environment where instructions are often supplemented with hand motions. Mishoe rattles off the ingredient list while pointing to each item: spinach, onions, olive oil. Spears imitates a knife movement above the pork loin while explaining how to slice the perfect medallones (medallions). The warmth of this interaction is a far cry from the experience of a traditional language classroom.

Immersion learning can be intimidating, but Cooking Up Spanish doesn’t throw its students into the proverbial deep end. Smith developed a curriculum that includes an apron pocket-sized book for each student to utilize during class. This pocket book contains the menu, cooking instructions, and a vocabulary list of ingredients and tools for each week. At times, the students struggle to bridge the words from the pocket book into cohesive phrases, but the teachers are there to polish those imperfections. “It’s learning all of the little idioms that make this class better than the rest,” said Eric Holloway, a student who took the class after traveling to the Dominican Republic. The natural, conversational style forces students to comprehend what they are saying rather than learn by simple rote. Annie Freeman, another student, agreed: “I love that, now, I think in Spanish at home when I cook.” Learning the language in a way that is applicable to everyday life makes it meaningful and memorable.

The class winds down once the meal is prepared. Teachers and students share their feast and indulge in a glass of wine, something they joke is “helpful” in encouraging confidence among speakers. As they taste the fruit of their labor, the Spanish lesson continues. Mishoe reviews the vocabulary list with the students and answers questions, all still in Spanish. Throughout the class, every student is engaged and invested; they are, for example, committed to rolling their R’s, even if they don’t flow off the tongue easily at first. Hannah Christian, a recent addition to Cooking Up Spanish’s board, seemed determined to make the group laugh. “Comedic timing is so difficult; I just want to be able to make a joke,” she explained, remembering how helpful that would have been when she studied abroad in college.

While each student is drawn to Cooking Up Spanish for different reasons, the common thread is the perspective they gain from the class. Immersed in a real-world, routine setting like cooking dinner, students encounter how difficult it can be as a stranger to a language. Gretta Riccobene, a student who teaches ESL at Manos de Christos, said, “The most important thing has been the insight into how humbling it is to learn a new language.”

The importance of that insight resonates with communities outside of Austin. Other cities, some outside the state of Texas, are interested in bringing Cooking Up Spanish and its other language variations to their regions. As Smith pointed out, there are more people than one might think who are trying to learn another language. In Austin, Smith often corrects people who assume that Cooking Up English would only serve Spanish speakers, given the cultural and geographic ties between Texas and Mexico. Instead, classes cater to adult immigrants, long-term visitors, refugees, and foreign students from South Korea all the way to Uzbekistan. And students are spreading the word by taking their newfound language skills to foreign countries or back to their native homeland. By doing so, they’ve become worldwide ambassadors for this nonprofit trying to break down cultural barriers. Joked Smith, “Yes, we want to take over the world!” It’s not too far-fetched a concept, considering the impact people can make once they can effectively communicate.

3 Crucial Ways That A Breast Cancer Helpline Can Help You

For Health, Fitness, and Fun