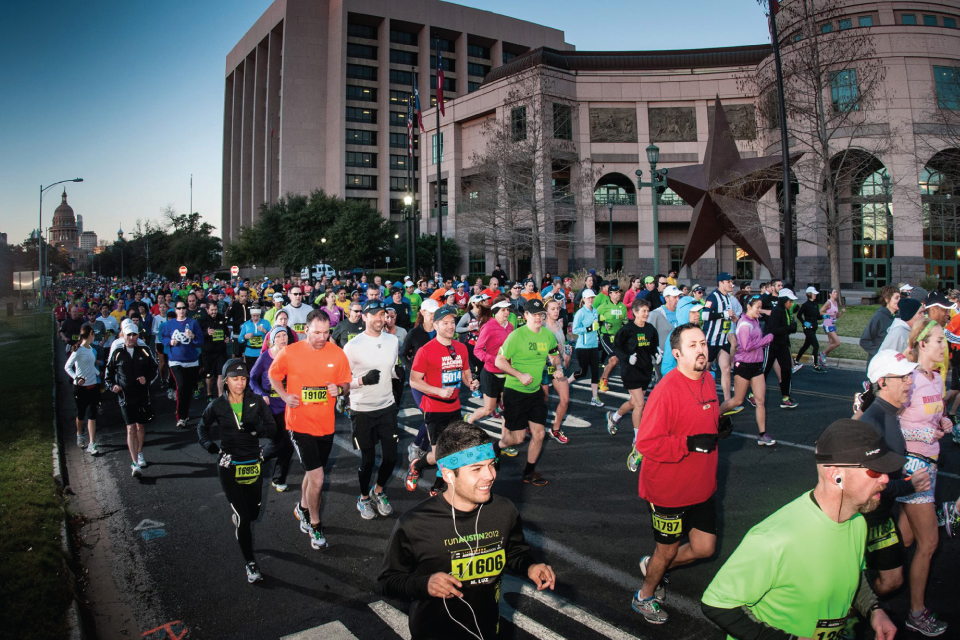 I want you to pass me at this year’s remaining AFMDC races!

It’s been years since I took on the Distance Challenge; the last time I did it, there were eight races, several of which are long gone (R.I.P., Strasberger-Price Run for the Hills, Motive Bison, and Buda 30K), and Austin Fit Magazine wasn’t the sponsor. Last February, the AFMDC director Vance Taylor publicly challenged me at the 2012-2013 AFMDC Awards Ceremony to do the series this year. I’m a sucker for a challenge. Add to it that my son has made this year’s Austin Marathon his first marathon, and it seemed that fate was pushing me toward the half-track option. So I was a sucker and signed up.

All of this led me to the starting line at the IBM Uptown Classic 10K. It was fun; I ran the whole way with a friend, who kept me moving. But the honest truth is, I’m not really running these days. I’ve taken a training break and am focusing on my health, which means a lot of what I’m doing is trying to get a handle on stress and weight. Any real training schedule has gone out the window at the recommendation of my trail running coach who held my hand (literally and figuratively) while I boo-hooed about letting go of some goals. These days, I’m boxing twice a week, walking whenever I can, and running two-three days a week.

As a result, I showed up at the Run for the Water 10 Miler as that person who is running her longest distance to date at the race, something I haven’t done in about 15 years. On one hand, it was scary. I know what Scenic is like; I know what ten miles feels like; I know what being unprepared for a race can mean. That combo can hurt. But on the other hand, it was incredibly freeing—when there are no expectations, there’s no risk of disappointment. After all, I knew I could cover the distance if I didn’t care about my pace, and so I made it my goal to simply run with joy, as Gilbert Tuhabonye instructed all of us runners to do at the soggy start line on race day morning.

I met my goal—the run was fun and I did finish. Yes, I was slow but who cares about my time if I don’t? I felt good and happy at the end, which means my morning was a success. But I did trudge along by myself for quite a bit and so I got to thinking. I came up with an idea, which I ran by Vance and ARC Director of Member Services Jim Gelb at the AFMDC tent at the end; they liked it, so here it goes: Leah’s 2013-2014 AFMDC Challenge.

I want you to pass me. If you’re participating in the 2013-2014 AFMDC, you’re going to be out there with me for the next four races (ARC Decker Challenge Half Marathon, Rogue Distance Festival, 3M, and the Austin Marathon and Half Marathon). I will be running my race slowly, with joy, and I’d like to see you make a goal to pass me. I’ll be seeding myself appropriately, which means I’m starting about

three quarters of the way back in the pack. I’m going to tweet a photo of myself the morning of each race so you can see what I’m wearing (@leahruns100); when you pass me, say hello and tell me your bib number. I’ll be recording that info—hey, if you want to stop and get a photo, let’s do it!—and then randomly selecting someone from each race for a prize. No, I don’t know what that prize is yet…but isn’t passing someone a little bit of a prize all by itself? I’ll announce that person in my blog following the race here at austinfitmagazine.com.

You’ll make my day by passing me and, hopefully, I’ll give some of you a little more “oomph” as you’re covering the remaining races. I can’t promise that I won’t actually get a bit faster, so keep training and I’ll see you at the ARC Decker Challenge Half Marathon on December 8 (remember to declare whether you’re full or half-track by January Austin Fit Magazine Distance Challenge by January 3!).

Here’s who’s out in front after the Run for the Water 10 Miler.  The times given are cumulative times from the first two Austin Fit Magazine Distance Challenge races.  For a complete listing of 2013-2014 AFMDC results, visit austinrunners.org and click on “Distance Challenge” in the dropdown menu.

3 Crucial Ways That A Breast Cancer Helpline Can Help You

For Health, Fitness, and Fun