Contrast Hydrotherapy and Your Brain 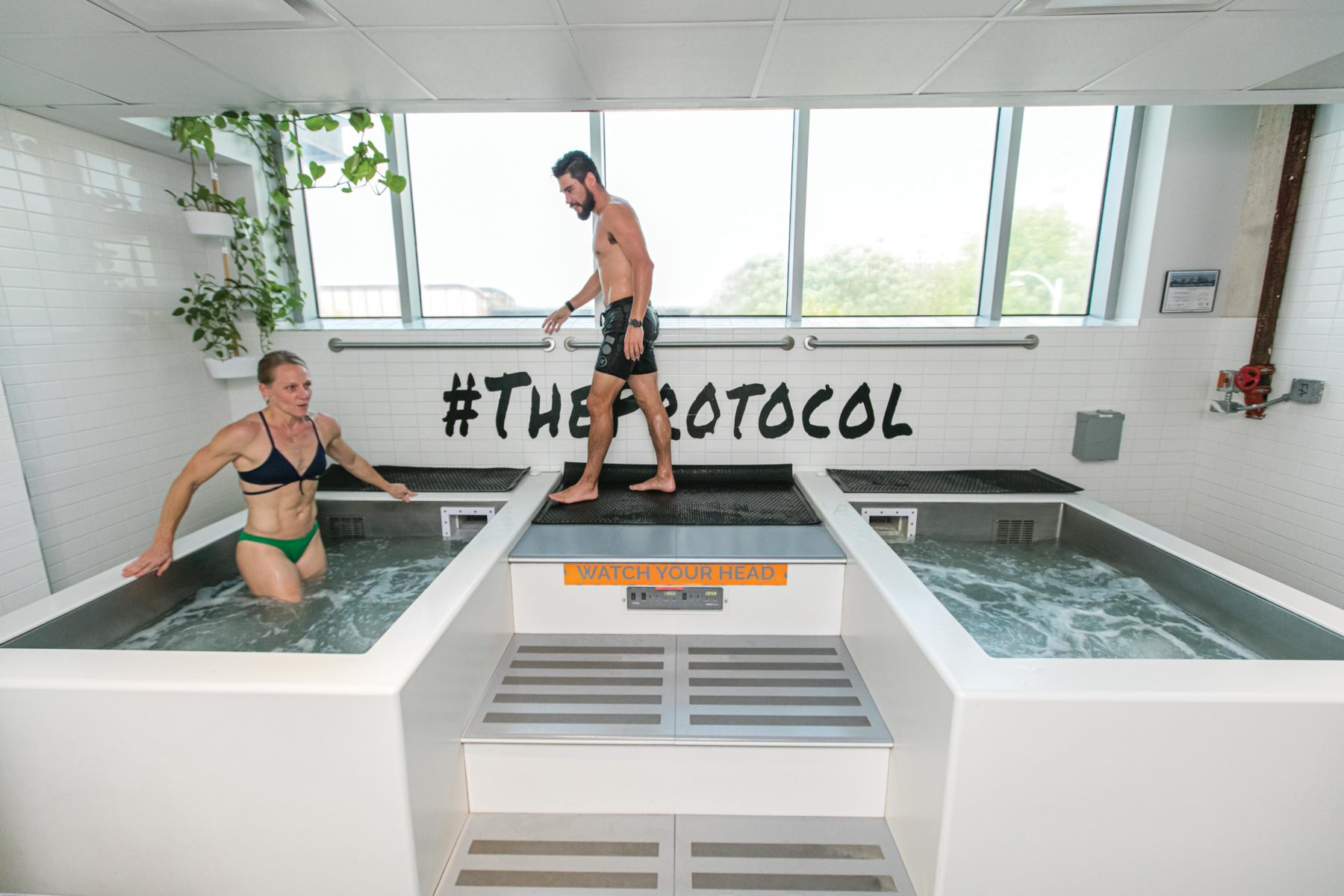 Ever leave a wellness center with a sense of clarity? Maybe you had a question or concern that’s been racking your brain, and it seemingly worked itself out. You’re calm yet vigilant, focused and effortlessly multi-tasking. Somehow, these paradoxical states have become your actualized experience. Personally, I feel happier, more conversational and patient, finding that I’m most productive in those hours immediately following contrast therapy. There’s a reason high performers — whether they’re athletes, special forces operators, C-suite executives or creatives — are flocking to contrast therapy and discovering new ways to get extremely hot and miserably cold. While the physical effects of contrast therapy often take center stage, the most profound effects might be happening between your ears.

What is contrast hydrotherapy (water therapy)?

Contrast hydrotherapy is simply alternating from cold water to hot water and, at Generator, the temperatures are a chilly 49 degrees and a balmy 107 degrees in both of the jetted tubs. Our protocol begins with 30 minutes in our full-spectrum infrared sauna, followed by three rounds of alternating between the hot and cold tubs for three minutes in each, ending with vibration and compression therapy.

Why opt for water as a thermal conductor for therapy and not air?

Water is a much better thermal conductor than air, at least by 20x or so. Ever wonder why 50°F water is so much colder than 50°F air? This is because heat escapes your body much more easily and quickly in cold water than if you were standing in cold air, because water conducts heat much more quickly, allowing the heat to pass through it from your body. Throw some jets on and you’re in for a chilly experience. Why? Jets dissipate the heat given off by your body away from your body, preventing your body from heating up. Brrrr.

Why would we ever do this to ourselves, you ask?!

Don’t feel like diving into the details? Here’s a cheat sheet of what’s being produced inside your brain during contrast therapy:

Bring on the Norepinephrine

When it comes to one’s physiological and neurological responses to the temperature fluctuations induced by contrast therapy, the star of the show is, undoubtedly, norepinephrine.

Norepinephrine is both a hormone and a neurotransmitter, and it’s what’s responsible for that feeling of increased vigilance, focus, attention and mood that you get after your time in the sauna and/or hot and cold tubs. Exposure to both extreme heat and cold have been scientifically proven to increase norepinephrine levels significantly (even as high as 500%). Better yet, the increased levels of norepinephrine and the fully optimized version of yourself that comes along with them have been shown to last for up to an hour after exposure. Norepinephrine is also a powerful combatant against inflammation, depression and attention deficit disorders, which is why many of the most prominent drugs prescribed to battle these ailments are norepinephrine reuptake inhibitors. Hot and cold stressors present a compelling case as therapeutic alternatives to prescription drugs, and while you may not suffer from such conditions, it’s hard to ignore the fact that norepinephrine plays a pivotal role in you becoming and remaining the best version of yourself.

Increasing your core temperature in short bursts, or hyperthermic conditioning, has been found to mimic many of the same effects on your brain as intense exercise. As your body heats up, your brain experiences elevated levels of blood flow and increased production of brain-derived neurotrophic factor, or BDNF. BDNF, a protein found in many parts of your brain, is extremely active in the hippocampus — the part of your brain responsible for learning efficiency and long-term memory — and is commonly referred to as “Miracle-Gro” for your brain due to its role in promoting neurogenesis.

Neurogenesis is the process in which new neurons grow. New brain cells means an optimized, enhanced brain, and one that is less susceptible to cognitive decline and depression.

A hormone that experiences an even greater rate of increase than norepinephrine during exposure to extreme heat is prolactin — up to 900%. Prolactin is pivotal in the process of myelin growth in your brain, which repairs nerve cell damage and makes your brain operate more efficiently.

We hear a lot about endorphins in relation to that “high” feeling you get after a good workout. In fact, they are often referred to as our body’s “feel-good” chemicals. During exposure to extreme heat, beta-endorphins, which are responsible for suppressing pain responses in your brain, are significantly increased.

Each of the above reactions your brain has in response to extreme heat can also be achieved through intense physical activity. If you want to supercharge these reactions, combine your contrast hydrotherapy sessions with a workout.

In conjunction with the radical increase in norepinephrine production during cold therapy, short periods of mild hypothermia also activate a release of dopamine in your brain. Dopamine is a neurotransmitter that acts as a chemical messenger to the pleasure and reward systems in our brain. It plays a big part in what makes us human and what gives us that satisfactory feeling that accompanies planning and task completion. In short, dopamine release helps us to strive, and it makes us not just better learners, but also more interested ones.

The final ingredient of our brain-optimizing, cold-therapy cocktail is the cold-shock protein, RBM3. Even mild exposure to cold temperatures causes a rapid uptick in RBM3 activity in our brains. Synapses, the pathways through which our brain cells communicate, are responsible for how we form memories but can get damaged and even disappear. Luckily for us, RBM3 reacts with the part of our neurons that utilizes these synapses and boosts their productivity. The more RBM3 that is present in our brains, the better these cold-shock proteins are able to stimulate damaged or degenerated synapses. RBM3 has been shown to not only repair and recreate synapses but also regenerate neurons, preventing cognitive decline.

Cold therapy is also a proven, powerful anti-inflammatory and can even be used to treat depression. Although studies have only recently made their way to the forefront, cold therapy has been a practice to treat depression and promote lucidity across cultures for centuries. So, want to become a quicker and more passionate learner, boost your mood and fight neurodegeneration? Time to get cold.

From an anecdotal standpoint, my personal experience with contrast therapy is enough to keep me coming back to the sauna and hot and cold tubs. It can be difficult to verbalize one’s feelings after exposure to these extreme temperatures, yet with science-backed evidence, we’re reassured that these modalities do in fact deliver us to an optimized state. Increased mood, a sharper and more resolute mental state, longevity for your brain – these are a few things we as humans unanimously seek, and now you know another way in which they can be attained.

Although these therapies sound a bit out there to some, they are becoming much more mainstream these days and are benefitting so many people in various ways. Decreasing inflammation is not only important for your body in order to physically perform better, but it’s arguably more important for your brain to mentally perform better and be healthier overall. Give contrast hydrotherapy a shot — what do you have to lose?

Jessica Tranchina, PT, DPT co-founder of Generator Athlete Lab and has been an athlete her whole life. As the creator of the Generator Method, Tranchina works to help guide others to better performance and recovery and is passionate about bringing the active community of Austin together from all fitness levels and athletic backgrounds. NASM-CPT, A.R.T Certified Provider, CKTP.

Willy Woods is an avid outdoorsman and athlete with a passion for health and wellness. When he’s not working full time as a vice president at Marsh, he can be found training for his next triathlon or planning his next adventure. A former certified personal trainer and C.H.E.K. Institute graduate as a Holistic Lifestyle Coach, Willy takes a comprehensive approach to his physical and mental fitness, focusing equally on exercise, diet and recovery.