Improving Your Turning Speed for the Win! 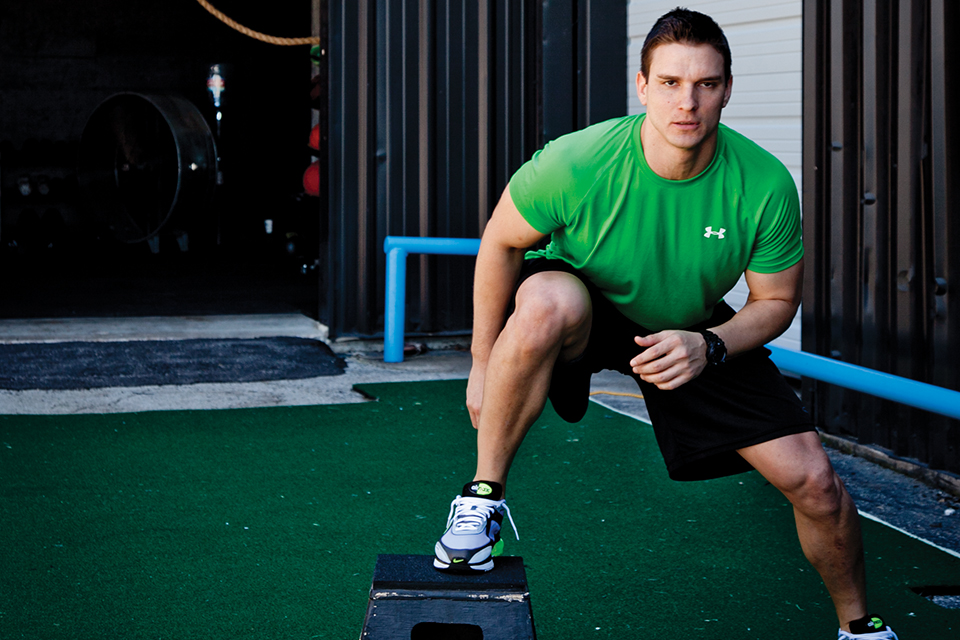 For many athletes, the ability to quickly and fluidly change direction is the difference between setting up a great tennis shot or being agile on an obstacle course event. For others, the ability to train lateral movements offers balanced strength development in order to assist performance and prevent injury in linear sports like running and cycling. Either way, agility training and changes of direction are a great addition to your fitness. That is why I made sure to include an agility test in the 2012 AFM FITTEST presented by Nexersys event. And to help you prepare to reach your best agility test score, we have given you some exercises that will boost your lateral strength, lateral power, and agility skills.

In past issues of the magazine, I have addressed movements that strengthen the muscles needed for lateral movements and stability support. In this issue, the movements are more sport-specific and address performing movements for decelerating and accelerating turning and changes of direction. When you see an athlete really master the strength, coordination, and power that go into changing direction, it looks smooth and almost effortless. This is because they have trained the neuromuscular system to control the body over their base of support while slightly dropping their center of mass to load the larger muscles of the lower body, mastering the art of redirecting acceleration through efficient deceleration followed by an explosive push-off. All done while maintaining balance and performing the movements “as fast as you can control.” Training this ability to change direction will determine whether you look like a fluid athlete making a tight turn on your mark or an uncoordinated, upright newbie, turning wide with some hops and stutter steps that add distance and time to your route.

We’ve first addressed a movement that adds strength to your posterior chain that extends the lower body at an angle for successful push-off in changing directions. In the next movement, we’ve focused on power development in the lateral direction. Finally, we’ve included a third movement, which is an agility drill that trains body positioning, speed, and coordination for changing directions with both right and left turns.

a. Use 4”-18” box or step. It is best to start with a low box and body weight. Use higher box and dumbbells for additional weight after you master form and when you need to increase intensity.

b. Start with your left foot flat on top of box. Lower leg on box should be vertical with toes forward. Shoulders stay squared forward at all times.

c. Right foot starts on the ground supported on the ball of the foot and positioned so that right leg crosses the midline of the body behind the box.

d. Execute the movement by pressing through box with left heel and foot flat on box, extend the left leg completely, and finish bringing right foot onto the box.

e. Slow and controlled, step off box with right foot crossing midline behind box and lower body to start position. Always keep left foot in contact with box through entire set of repetitions.

f. Repeat movement with right foot starting on box and stepping back with left.

a. Start with one foot on a low box/step and one foot on ground with toes facing forward. Most of your weight should be on the box foot. Your other foot is placed on the ground directly to the side of your box-planted foot.

b. Forcefully push off box both vertically and laterally, getting full extension of the push-off leg, passing over top and switching feet on box.

c. Ground-based leg is supporting body at an angle but the majority of your weight should be on box-planted leg for executing the powerful push-off of the box.

e. Repeat the shuffling of feet on the box “as fast as can be controlled” and landings should be as quiet as possible.

b. Run a “figure 8” pattern by turning on the left side of the cone, cross between the cones, and then turn right around the second cone.

c. On each turn, focus on slightly dropping the body’s center by bending the lower body and maintaining the majority of your body weight on the inside edge of the foot closest to the cone.

d. It’s important to always angle the lower leg of the outside leg inward towards your turn and slightly lean into your turn.

Being a well-rounded athlete, which includes being efficient at turns and changes of directions, will improve your performance and even more importantly keep you in the competition by avoiding injuries. Train your agility and boost your ranking at the2012 AFM FITTEST on Saturday, June 9th!

Diane Vives, MS, is an Advisory Member of the Under Armour Performance Training Council. An internationally recognized fitness expert, she has appeared in several publications such as Women’s Health, Shape, and Muscle & Fitness Hers.