The Dashing Dachshunds of Buda, Texas

When Diane Krejci first brought the idea for a dachshund race to the Buda Lions Club, they all gave her “the business,” according to long-time member of the club since 1986, Charles Handrick. But once the jokes melted away, the rest of the members decided that if she was willing to run with it, the club would back her — so she got right to work.

Krejci had gotten the concept from a similar event out in Savannah, Georgia, where her daughter lived. Having been a big fan of dachshunds, she immediately latched on to the idea and realized it could be a great fundraiser for the Buda Lions Club, where she was one of two woman members. Once she got the go-ahead from the group, one of her first lines of duty was the trophies.

“When she came in with those trophies,” Handrick recalls, “that’s when we knew she wasn’t kidding around. She was going to make this thing happen.”

Although it started as a small affair with only about 35 dogs running from point A to point B, it didn’t take long for the world to catch on to what was going on in Buda, Texas. Each year, the race would grow little by little until the sixth year, when everything changed. That year, the reporter and television news correspondent Bill Geist of CBS News Sunday Morning did a story on the races, airing the segment across the nation. When it came time for the race, over 600 dogs showed up to get in on the action.

That aggressive spike in numbers created growing pains that were felt across the small town and the even smaller event team, but they managed to quickly meld together to face the new challenges that would continue to arise each year. From working with the city to create a safe parking and transportation option to the fencing of the race itself, it all took time and teamwork with the local people of Buda.

Now, with 23 years of dog races under its belt, the Buda Lions Club has brought joy and smiles to thousands of people from all walks of life every year through the Buda Wiener Dog Races. Some come in from as far as Colorado, Florida and even Wisconsin just to join in on the fun.

Caty Colón, who has attended the dog-lover event for about 10 years and is the founder of San Antonio Lowriders dachshund meetup group, says that the weekend’s events are like Christmas for her. Hailing from San Antonio, Texas, the trek to Buda is a short one, but one she anticipates all year.

“As soon as you park, you are surrounded by dachshunds, and then you get on a bus full of them,” Colón says, referring to the school buses that transport attendants from the local school’s parking lot to the front gate of the event. “It’s one of the most joyous events. Everyone is smiling and there is just dachshund-themed everything!”

The weekend kicks off with a dachshund parade and costume contest, typically in that year’s event theme. Handrick says themes over the years have included movie spin-offs like “Wiener of Oz” or “Wiener Gump” — which only adds to the hilarity and fun of the day.

The rest of Saturday is spent with festival fun, activities and, of course, preliminary races throughout the day. The day’s activities include a craft fair full of both local and eccentric fares, not to mention all sorts of dachshund-themed items — a BBQ cook-off and more with a changing lineup each year as the team finds new ways to provide entertainment for families arriving from all over the nation.

“We’ve been resisting the idea of adding a beer garden these past few years,” Handrick says, “because we want the event to remain family-friendly, something you can bring your kids and grandkids to.”

Family-friendly is exactly what this event is, with so much to see and do even if you don’t own your own dachshund. The races themselves start on Saturday as heat after heat of prelims go throughout the day and into Sunday morning. Dogs can race in as many preliminary heats as they want if they are aiming to make it into the finals. Each race does have an entrance fee which goes to support the various organizations that help put on the event.

Then, when it comes time for finals on Sunday, each heat takes the top two as it slowly works to narrow down the competition pool. In the very final heat, there are only about six competitors — and these are the fastest of the fast.

Once compared to the Kentucky Derby, it’s no surprise that the stakes become so high towards those final rounds, with owners and onlookers growing in anticipation. The first place winner takes home not only bragging rights, but a $500 prize with second and third getting a good sum of money, too. From the colored lanes, colored collars and intricate starting boxes, the race has really amped up the setup over the years — all to make the race run smoother, keep track of wandering pups and put everyone on the same playing field.

“We had to invest in one of those photo-finish cameras,” Handrick says. “It was the only way because it can get real close, and people want proof about who got in first if not their dog.”

Colón says that her first dachshund, Bella, had competed in the races that first year they attended the event in 2010, but she and her pup had no idea what they were getting themselves into. With all of the squeaky toys, cheers and people, it was no surprise that Bella quickly got distracted and didn’t quite make her way directly to the finish line. Like most others who attend or compete in the races, Colón says she goes just for the love of dachshunds and the event, not to win the race itself. Although Bella is no longer with her, Colón says she looks forward to getting her newest, Hershey, in a Buda race.

“I’m excited to get Hershey out there. She’s been to the event but never raced,” Colón says. “She’s raced at smaller wiener dog races, but I’m excited to test her stuff at the big one — at Buda, the Wiener Dog Capital of Texas.”

Whether there for the big prize, to meet other dachshunds or just to watch the fun bedlam of the annual event, there’s no losing. Everyone is sure to have a great time and bring home happy smiles and memories of goofy costumes and dachshund shenanigans.

“I think our announcer said it best one year when he said that it’s the only place you can see a grown man jumping and hollering while holding a squeaky toy,” Handrick says. “There’s just nothing like it.” 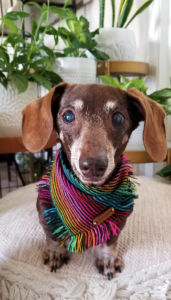 Catching Up to the Statesman Cap10K