Take one look at Louis and you’ll know why we chose him as one of our fittest dogs. Known by many as ‘Coach Louis,’ this Bantam Bulldog (half French bulldog, half Old English bulldog) is pure muscle—and he expects his friends to follow suit. A mainstay at Titan Evolution, Louis lives for the sweat life and loves to motivate others. He’s a bit of a prankster, too, and is especially notorious for sneaking up to steal open yoga mats. (We think he’s just trying to show off his mastery of downward dog.) Beloved around town for his big smile, huge heart, and great attitude, Coach Louis was an easy choice for us.

1. The Bulldog was first recognized by the AKC in 1886, shortly after the AKC itself was founded in 1884.

2. Bulldogs are particularly popular among celebrities and are one of the most popular dog breeds in Los Angeles. Leonardo DiCaprio, Reese Witherspoon, and Hugh Jackman are just a few Hollywood celebrities that own bulldogs.

Buster may look fluffy on the outside, but he’s all muscle underneath. With a marathon-runner mom, he typically runs anywhere between four to eight miles each day. That’s just Buster’s warm-up; post-run is when he has the most energy to play. His impressive list of accomplishments includes having run a mile under five minutes and a personal 5K PR of 20:26. Despite his extraordinary resume, this Wheaten Terrier especially loves to exercise recreationally. His favorite activities include hiking, exploring the woods, playing keep-away with his fetch toys, and swimming at every chance he can get. Buster also knows how to run alongside a bike, rounding him out to be a potentially competitive triathlete.

1. The Wheaten Terrier was recognized as a breed by the Irish Kennel Club on St. Patrick’s Day in 1937.

2. Terriers like the Wheaten were considered “a poor man’s dog” in ancient Ireland, when only upper class landowners were allowed to own spaniels and hounds. 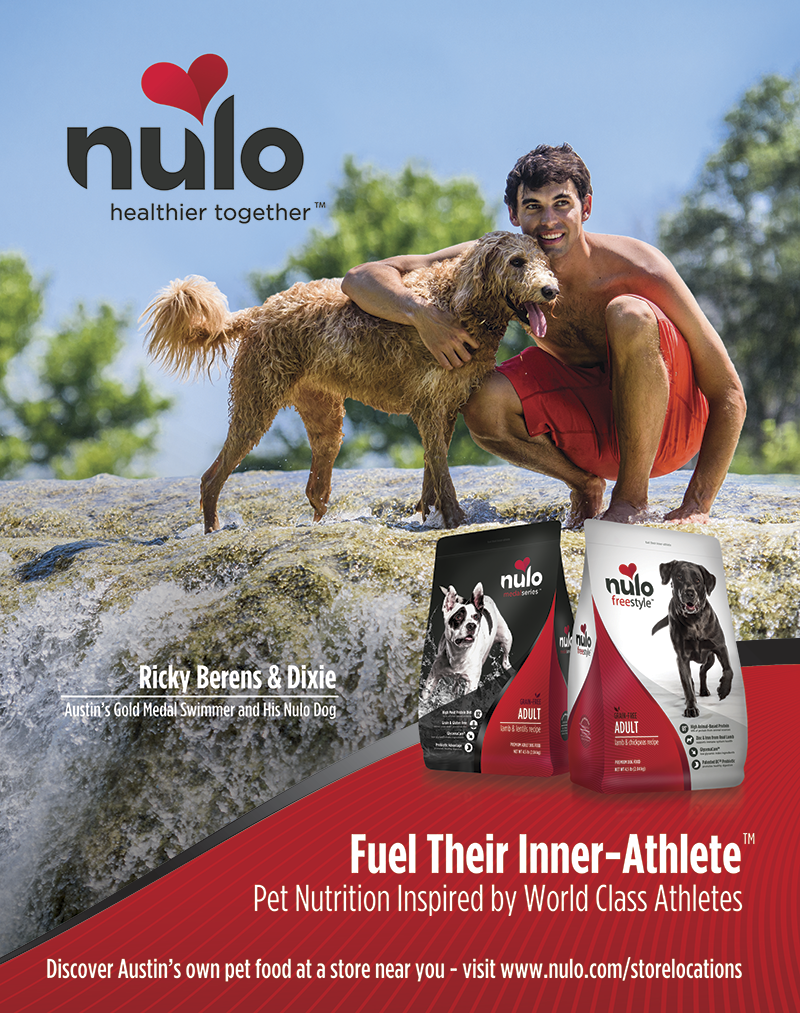 ​Believe it or not, Finley has found a way to be all work and all play. As a sporting breed, he demands rigorous exercise and adventure on the daily, and his owners don’t hesitate to give it to him. From swims in Lady Bird Lake, to hikes in the greenbelt, to sprinting up rocky hills, Finley truly is the epitome of non-stop. Active is an understatement when describing Finley: He’s actually better behaved running next to a speeding bike than he is while walking on a leash. If there were doggy fitness models, he’d be one—his powerful body’s blend of power and agility gives him a sleek appearance and the ability to sprint up to 40 miles per hour. Finley will gladly slow it down for other dogs, though, and is a popular playmate at Zilker Park and Taurus Doggie Day Care.

1. Second only to the Greyhound, Vizslas are one of the fastest dog breeds.

2. Vizslas are also known as the Hungarian Pointer. Artists depicted Vizslas in etchings as far back as the 10th century.

3. The two World Wars almost caused the Vizsla’s extinction, but the breed was saved by sending some of the dogs to the United States. 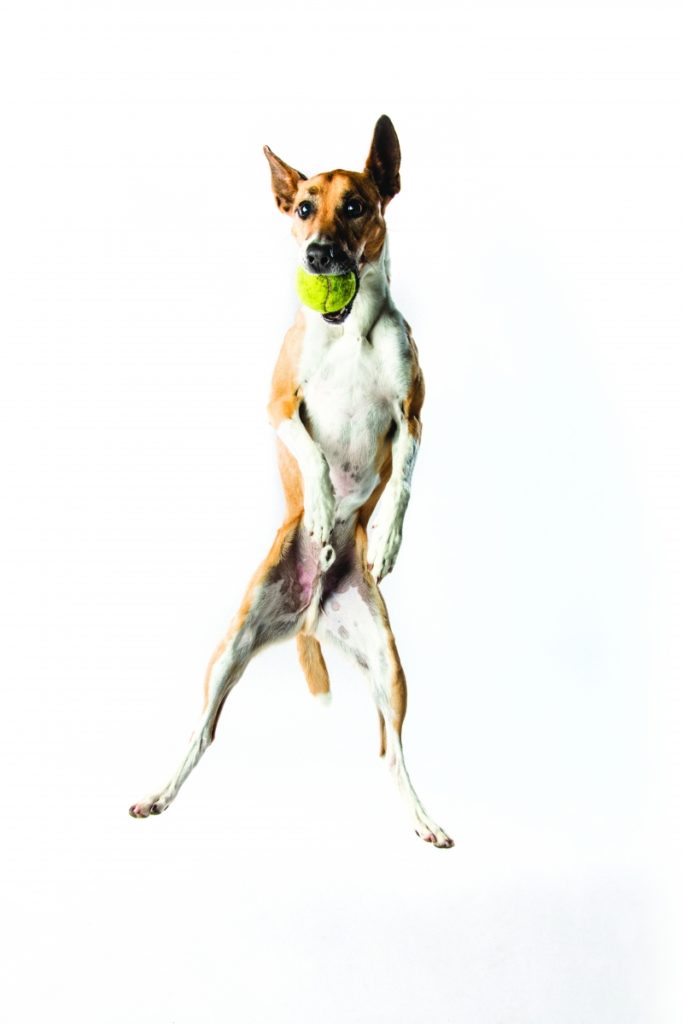 Personal trainers train their clients. But who trains the trainers? Tiberius, of course. An Austin Pets Alive adoptee, he had to spend 10 weeks on bedrest recovering from heartworm. Ever since he was cleared as healthy, he hasn’t stopped moving. Tiberius is one of the fastest dogs you’ll find and will catch just about anything you throw his way. Because his dad’s a trainer, he’s in the gym for every workout to provide moral support and motivation—in fact, he hasn’t missed a day since he was adopted. Tiberius was meant for the gym, and he can prove it: his veterinarian calls him the “Arnold Schwarzenegger of Basenjis.” Case closed.

1. Famous for being the “barkless breed,” Basenjis can only produce small yodeling-like noises.

2. The first Basenjis were brought from the source of the Nile River as presents to Ancient Egyptian pharaohs. They eventually gained a reputation for being a popular African hunting dog.

3. Basenjis have many unusual habits, such as cleaning themselves all over like cats do.

Very seldom is there a unanimous selection during our fittest dog voting, but Chance is an exception to that rule—and for good reason. An Austin Animal Center rescue, he’s made the most of his namesake (the second chance in life he’s received) with Brook, his loving owner. He’s not just a feel-good story, though. This pup’s a stellar athlete. Chance runs seven to nine miles five times a week, and it shows in his race results: he won both the Humane Heroes 5K and the Schlotzsky’s Bun Run Fastest Dog 5K last year! Recipient of the Fastest Dog in Austin award and owner of a 6:30 mile pace, Chance has more than earned the title of Fittest Dog.

1. In the novel version of “Old Yeller,” the courageous, loyal family dog is a Black Mouth Cur.

Don’t let the shaggy hair fool you: this guy’s all business when it comes to fitness. Getting the best qualities from his Goldendoodle and Labradoodle mix, Russki’s a fan of long hikes, Stronghorn Fitness’ boot camps, and playing with other dogs. Did we mention he’s a workaholic? He’s constantly in training mode for 5Ks, 10Ks, and half marathons, and is a big-time trail runner, too. (He helped his mom win the first trail race she ever ran!) His natural state may actually be in the water, as he is an incredible swimmer. With a work ethic and personality to match, adding Russki to our list was a no-brainer.

3. The Labradoodle almost became the Obamas’ choice of pet in the White House, but the family ultimately decided on the Portuguese Water Dog.

Originally bred to be a working military dog, Gunny was discharged for demonstrating a lack of aggression. He’s the perfect blend of strong, vivacious, and obedient—with an expert nose—so he wasn’t exactly ready for retirement. Gunny now expends his energy in his role as an arson dog, working alongside his dad who makes a living as an arson investigator. In addition to regularly attending classes at Redside CrossFit, Gunny likes to hit Brushy Creek for two hour hikes and go to the nearby high school three times a week for intense sprint sessions. When all that doesn’t suffice, he likes to spend his evenings chasing his ball all over his backyard until his owners’ arms get tired. Let’s face it—Gunny doesn’t have an off switch. We like that in a dog.

1. A Belgian Malinois named Cairo was an essential part of the SEAL Team 6 plan that took down Osama Bin Laden in 2011.

2. Today, the Belgian Malinois is one of the top breeds chosen by police departments around the country.

Shhh! Don’t let her know, but Maggie’s actually 10, not 5—which is how she acts. The grandmother of this bunch of fit dogs, this Border Collie truly has found the fountain of youth. Between swimming in the ocean, chasing her frisbee, and fetching until she’s exhausted all adults and children, Maggie knows how to keep active and stay young. In addition to her youthful glow, this brainiac knows over 50 commands and is the lead assistant for her owners’ dog training company, Whole Pooch. This skillset is what booked her a gig on an official Verizon commercial. A career dog with beauty and brains? We couldn’t resist!

1. Collies are perhaps among the most film-famous dogs, after being featured in “Babe” and “Lassie.”

2. Border Collies are hailed as one of the smartest breeds of dogs.

3. The Border Collie’s name comes from originally being bred in the borderlands between Scotland and England.

Introducing Your Pups to Your Newborn