Austin Fit > Articles > Fitness > Getting a Leg Up

Getting a Leg Up 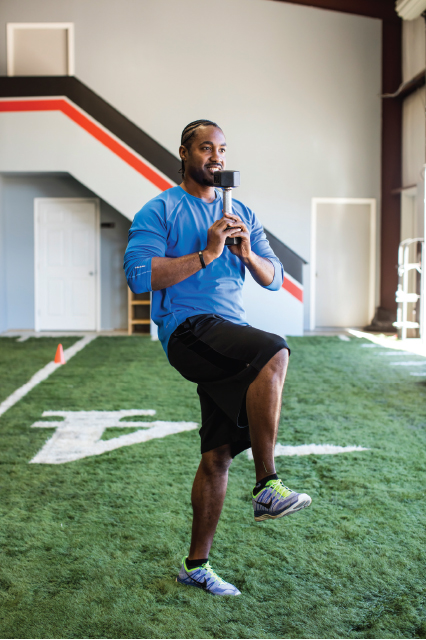 The AFM FITTEST trainings are starting to kick off for this year’s competition. In the core tests there are four running events. Although they express different emphasis of the energy systems such as sprint speed, agility, speed endurance and long distance endurance, they all require good running mechanics. And the underlying ability to learn good running mechanics and fundamental work capacity is having solid basic movement ability. That is why single leg stability and strength skills are advantageous. Running and changes of direction rely on transfer from one leg to the other and each leg must contribute to the strength, speed and power needed for good acceleration and deceleration skills. So, we are going to focus on three movements that allow us to focus on single leg stability, single leg strength and the transfer of single leg power from the ground up using the whole kinetic chain.

The physical ability to gain work capacity and control on a single leg will carry over into the building blocks of running mechanics.  Don’t forget to reach out to your local running coaches to start your training for AFM FITTEST.

Purpose:  This exercise relies on the stability of the single leg stance, maintaining static motor control of the hips and then challenging the lower body posture with an upper body halo movement.

Upright posture through the torso is essential to the proper position.

Hold a kettlebell bottom up or a dumbbell from one end in front of the chest to start.

Move the dumbbell around circling around the head and shoulders while making sure not to let anything in the lower body change position.

Use a natural reaching motion of the shoulders to clear the body and allow for fluid movement in one direction for 5 halos, then reverse the direction of the halo for 5 more repetitions.

Then switch the single leg stance to the opposite side and repeat the halos.

Purpose:  This movement engages hip extension while encouraging the body to open up the anterior hip to achieve a full hip extended position and develop strength for the single leg stance.

Start with your upper back supported on a box or bench with your arms extended to the sides with palms up.  Feet are hip-width apart and should be underneath the knees with the torso parallel to the ground.   There should be a straight line between the knees, hips and shoulders.

Shift to a single leg and lift the opposite leg just off the ground to establish the single leg support. Then drop the hips until the torso is at a 45-degree angle to the ground.

Then re-extend the hips by pressing through the heels to return to the single-leg start position.

Perform 10-12 quality repetitions. Avoid any arching in the back or pressing of the arms into the bench.

Then descend into the split squat bringing the back knee toward the ground and maintaining a level pelvic position with a tall posture through the torso.

Press through the ground to return to start, release the arms back to start.

Be sure to repeat the sequence of using the arms to engage, then squat, then return to start and finally release the arms on every single repetition.  This focuses on core sequencing and engagement to maintain proper position.

Purpose:  This combination movement encourages powerful extension of the knee and hip extension while transferring the force all the way up into an overhead press. Trains a total body movement that is initiated on a single leg.

Stand tall on a single leg stance and a dumbbell carried at the front rack or shoulder position on the opposite side to the stance leg.

While maintaining a rigid torso, load the lower body by flexing at the knee and hip. Allow a natural forward lean with the torso that matches the shin angle.
Then drive up by pushing the foot through the floor and extending the knee and hip.

Let the momentum carry through to the upper body and finish with an overhead press performed as fast as you can control.

Reset for each repetition and perform 5-8 reps on each side.