Train A Dog, Save A Warrior 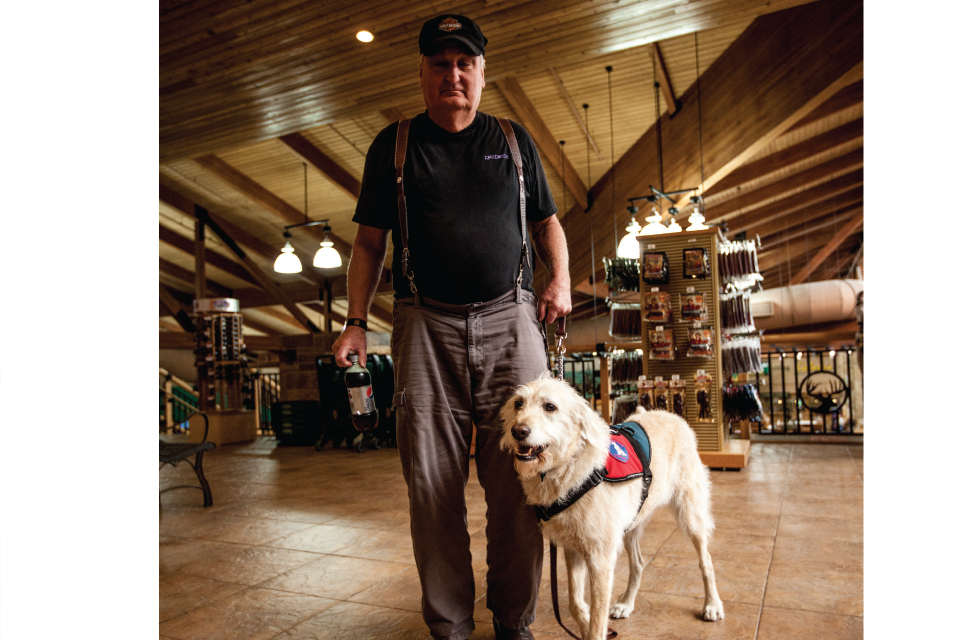 Veterans get by with a little help from man's best friend
Amid the backdrop of taxidermied wildlife, camouflage sportswear, and camping gear, a group of war veterans—young and old—circulates around the main floor of Cabela’s sporting goods store with a look of concentration in their eyes. Each vet focuses on his or her partner and, together, they practice the skills they have learned and refined over the previous months. There is a gentle touch. A command. A reward.
There is also praise. Lots and lots of praise.

Accompanying these veterans are no ordinary companions. These are service dogs from the Train a Dog, Save a Warrior (TADSAW) program based in San Antonio, Texas, and today they are finally testing their skills for certification. Although they are fresh out of boot camp, these animals have already begun to change the lives of their new handlers in extraordinary ways.

For many of these veterans, all of whom suffer from post-traumatic stress disorder (PTSD), the idea of being in a public space was not, until recently, in the realm of possibility. Army veteran Jason Thomas explained that even a simple trip to the grocery store once caused him untold anxiety, resulting in a crippling isolation. Since being paired with his service dog Delta, however, Thomas has not only begun to venture to restaurants and grocery stores but also recently attended a Green Bay Packers game with his father. “I’m getting to live a normal life again,” he said.

Helping war veterans return to a normal life is no easy feat. The Department of Veterans Affairs (VA) recently reported that approximately 30 percent of veterans who are treated in a VA hospital suffer from PTSD—and this number includes only veterans from Iraq and Afghanistan. Unlike a typical stress-related reaction to a traumatic or life-threatening event, PTSD triggers changes in brain chemistry that can lead to anxiety, depression, avoidance, and a host of other debilitating symptoms. For many soldiers who suffer from PTSD, the seemingly mundane tasks of day-to-day living become insurmountable obstacles under the shadow of their trauma.
That’s where programs like TADSAW come in.

Numerous studies have shown that petting a dog has the ability to lower blood pressure, decrease the production of the stress hormone cortisol, and increase the “feel-good” hormone oxytocin. TADSAW co-founder Patsy Swendson has been a proponent of the healing power of animals for almost three decades. Swendson was the founder of the Texas chapter of the Delta Society [now Pet Partners] pet therapy association, and her dog Casey was the first legally certified therapy dog in the state. Swendson volunteered for years with Casey (and later with her dog Penny), visiting military posts and bringing comfort to wounded warriors and their families. From the moment Casey connected with her first patient, Swendson knew she had found her calling: “I knew this was where I needed to be,” she said.

Swendson eventually met Bart Sherwood, a fellow volunteer who shared her desire to help soldiers and their families heal emotionally from the wounds of war. The two co-founded TADSAW, which trains qualified shelter dogs as service animals for veterans suffering with PTSD. The service dogs may accompany the veterans in any public space, helping them break the cycle of isolation. Army veteran Tasha Johnson can attest to the positive changes her service dog Hexie has helped her make: “I’m more active, more calm, more focused,” she explained. “She’s MY dog,” Johnson beamed, leaning down to scratch Hexie’s ears.

The program is not cheap. According to Sherwood, it costs approximately $2,500 to train one dog. There is no cost for veterans, however; the organization is funded solely by private donations. Sherwood said that what helps make the program successful is their philosophy of “training the person, not just the dog.” TADSAW partners with trainers from the Animal Behavior College who work one-on-one with the veterans, helping them develop their own handling skills.

The human–canine bond, on the other hand, happens naturally—and typically very quickly, as Army veteran Sot Lisa Marsh attested. “He now sleeps in our bed,” she said, nodding at her service dog and sharing a chuckle with her husband. Sherwood explained that this sleeping arrangement is commonplace among veterans; their dogs wake them from their nightmares and offer comfort during the night.

Researchers may still be investigating the science behind the health benefits of companion animals; however, the countless personal testimonials of veterans tell a more powerful story. Many have been able to reduce their medications by half, said Swendson, while others have simply been pulled back to reality by the presence of their canine friends. “After [veterans] complete our program, I always ask if I can hug them, and I say, ‘Thank you for your service,’” said Swendson. “They often respond, ‘No, thank YOU for what you have done.’ …How can I NOT do what I’m doing?” she asked with a smile. It is this sentiment that keeps Swendson and Sherwood going. In spite of the difficult—and often emotionally taxing—work that operating TADSAW requires, they wouldn’t have it any other way.

Healing the Unseen Wounds of War