It’s almost like flying, but on ice rather than in the air. It’s all about tossing, turning and pushing to score before the 20-minute mark, which requires subtle and quick movements. The ice is cold and the equipment is heavy, but having two sticks aids in the action necessary for the game. The balance is difficult to achieve, but the essential skills will become second nature with enough practice and learning to stop, brake and turn in enough time. This is the game of sled hockey.

Austin has their own sled hockey team called the Austin Blades, a nonprofit organization entirely run by players, board members and volunteers. Each player receives a sled, hockey sticks and a one-year membership. The organization’s mission is to encourage physical health, self-confidence, strong family values and a positive and constructive collaborative environment to promote personal growth in all aspects of life.

For Grant Blair, a 17-year-old forward, the team’s mission is not only to provide opportunities for disabled athletes to participate in sports but also to promote sled hockey as a major sport. Blair first heard about Austin Blades while participating in the Miracle League, a baseball league for people with disabilities. He says he fell in love with the sport when he got onto the ice.

“Someone who ran the league introduced me to it and since I already loved watching hockey, being able to have the chance to actually play it was something I didn’t think I would be able to do,” Blair says. “There were practices every Sunday, so my friend and I went to try it out, and I instantly fell In love with it.” 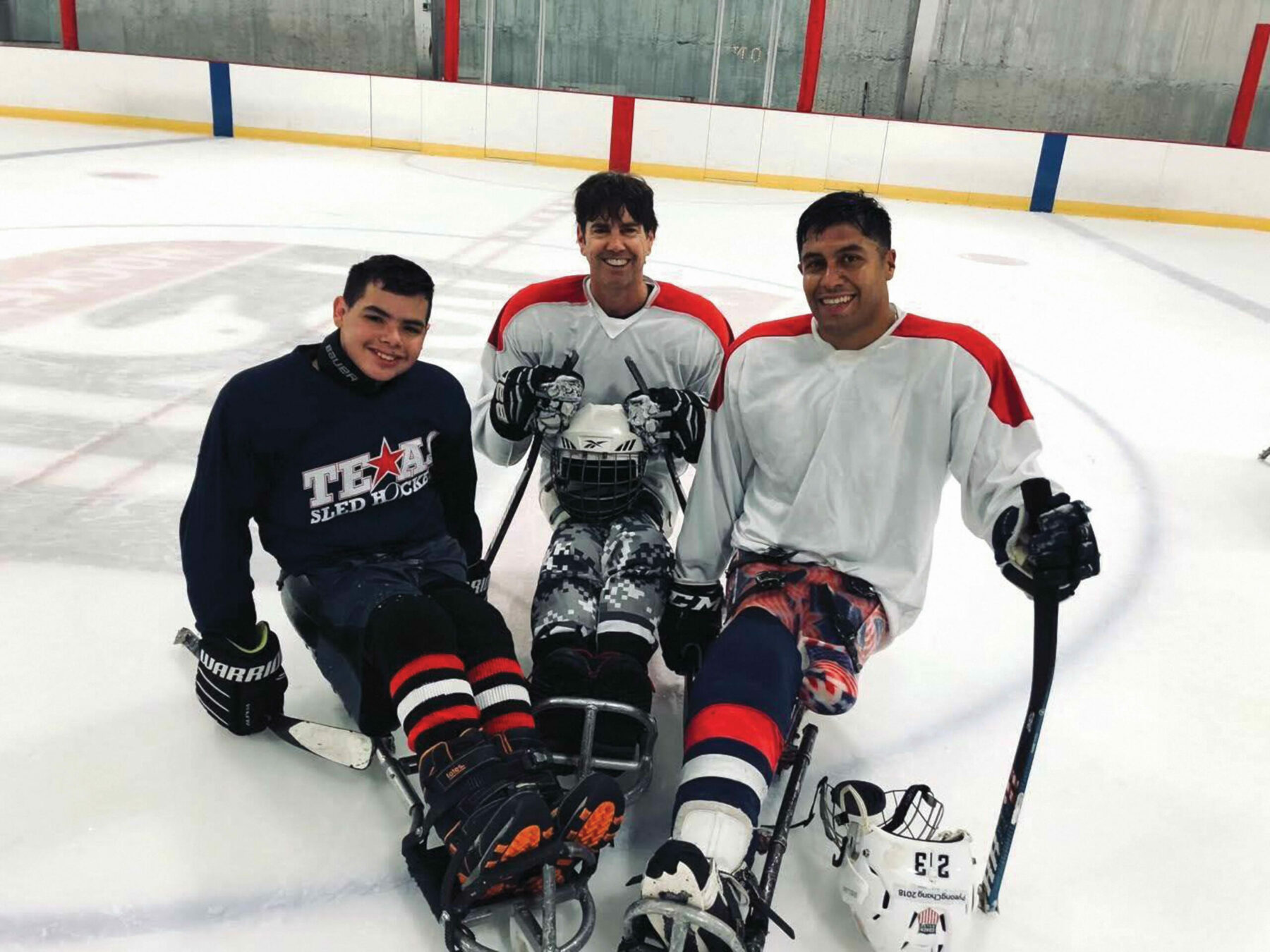 Sled hockey is a sitting version of ice hockey for players who cannot play stand-up hockey due to a disability. The sport was established in the 1960s by a group of Swedes who were determined to keep playing hockey despite their physical limitations. In sled hockey, players will propel their sleds with spikes on the ends of two 3-foot-long sticks, pushing themselves and shooting and passing the puck ambidextrously.

The rules for sled hockey are fairly similar to stand-up hockey. Goalies use the same equipment, but their gloves are modified to have a tighter grip for the stick and sled components. For three 20-minute periods, the game is played on an ice rink with standard-sized nets and pucks.

The Austin Blades has an adult competitive sled hockey team and is gradually incorporating a complete kids sled hockey team. While sled hockey is not as prominent as standing hockey, the team has gained valuable experience and success by competing in numerous tournaments and being recognized by the USA National Disabled Sled Hockey Festival Tournament from 2012 to 2017.

The team’s typical Sunday practice includes warming up by skating laps around the rink and mindlessly shooting into the net to get reacquainted with the ice. Then, they do drills such as passing and shooting, always finishing with a scrimmage 20 minutes before practice ends.

Austin Blades’ vice president Samuel Samarippa explains that the group’s primary mission is to serve a specific population of underserved individuals who want to join a hockey game.

“(The main goal of the team is) to empower physically or developmentally challenged individuals by providing the opportunity to enjoy the sport of ice hockey,” Samarippa says. 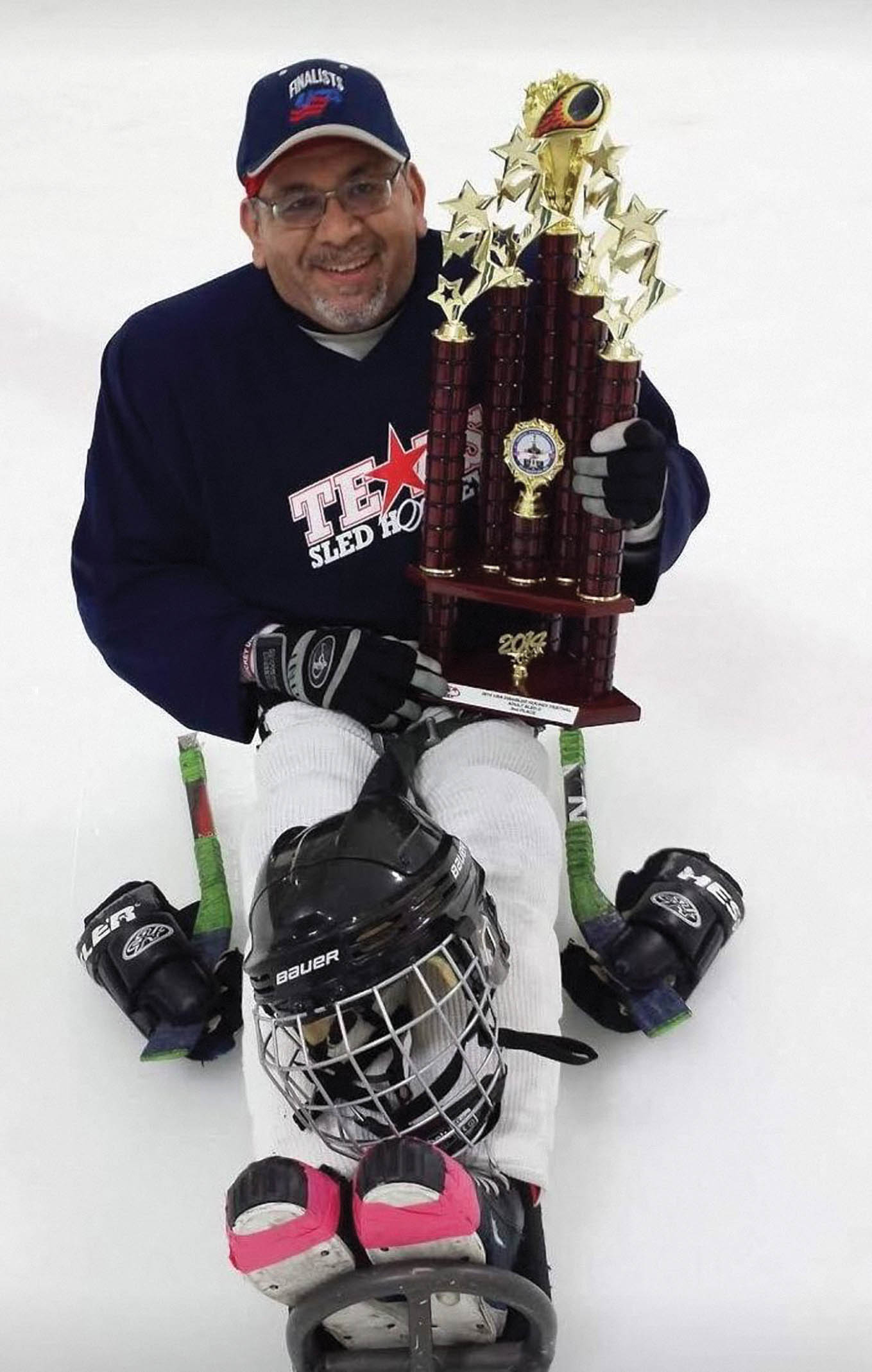 Aside from the fact that the team allows physically and developmentally disabled individuals to play hockey, Samarippa says he also joined his daughter on the ice because she was afraid to be alone. Once he was on the ice, he never wanted to leave.

“I first heard about sled hockey when I was working out at the wheelchair fitness center back in late 2004,” Samarippa says. “I took my daughter, who also uses a wheelchair, to try out.”

Samarippa, who also plays for the Austin Blades, observes that while camaraderie is one of the best aspects of being a part of the team, it’s also the community built within the team and the commitment to oneself. His introduction to sled hockey is a personal story and testament to his love of the sport.

Another team member Sam Strain is a teenager, like Blair, who wants to leave his mark on the team. The 15-year-old winger’s mission is to become a better player as well as grow and learn with the team.

Strain began playing for the Dallas Sled Stars at the age of 10 to release energy after participating in traditional sports before his Perthes disease diagnosis. He learned the ins and outs of the sport with the Dallas Sled Stars, and when he moved to Austin, he found the first place where he could continue his love for the sport.

“My family moved to Austin four years ago, and I joined the Austin Blades team,” Strain says. “The Dallas and Austin teams have collaborated for games and practices. We go on trips together and are all still very close friends.” 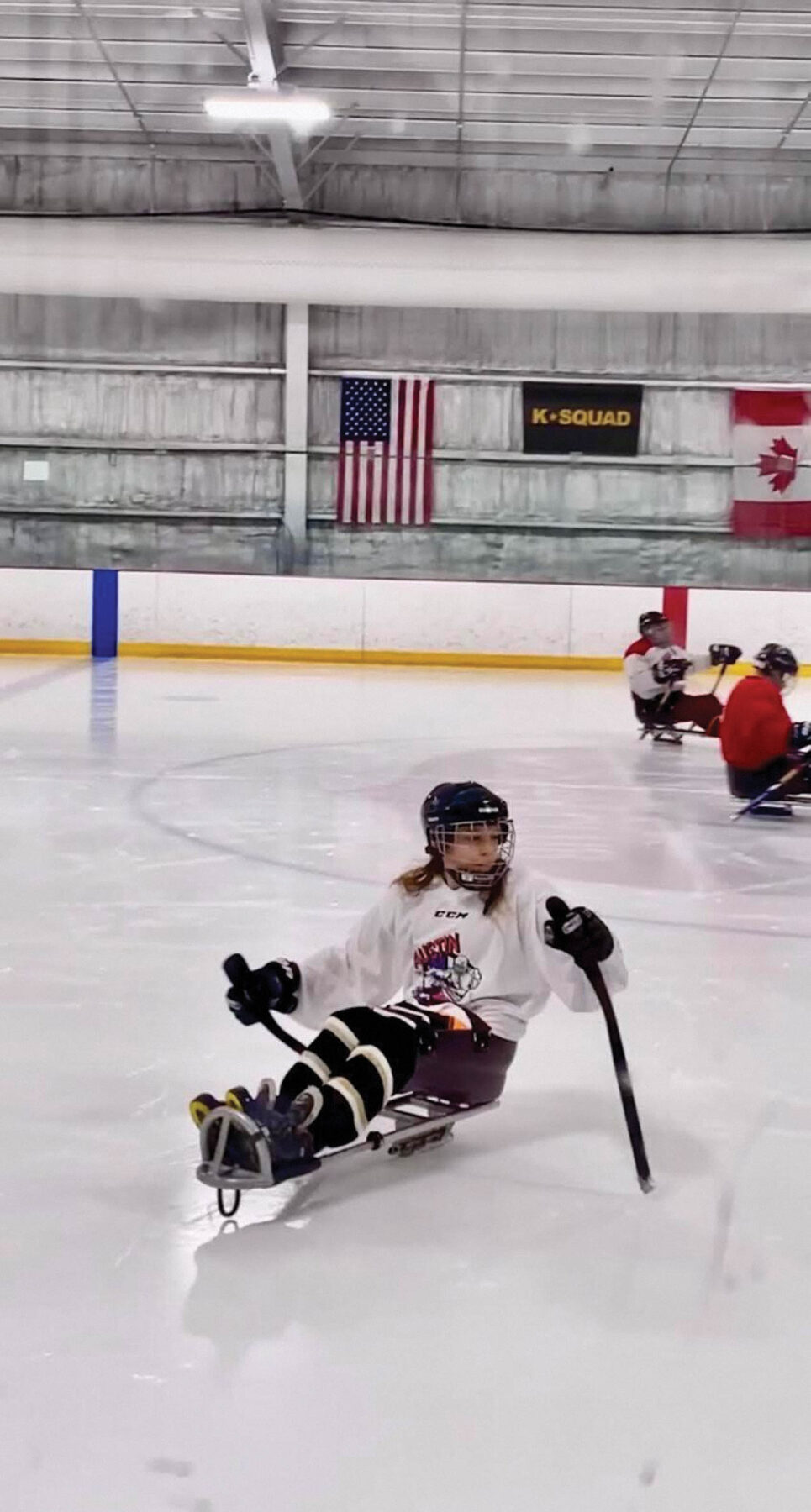 Samarippa, Blair and Strain are sled hockey supporters who believe in their team and are determined to play a sport that grants them a second chance to grow as players and people. According to the Austin Blade members, prior hockey experience is not required to join the team. The local team also always accepts donations to help them continue their league and provide an opportunity for everyone to play and find themselves in a sport that creates a place for players to love sled hockey and explore the boundaries of their disabilities.

When reflecting on his diagnosis and time with the Blades, Strain describes his passion and gratitude for the sport.

“I am so thankful that I am able to play sled hockey,” Strain says. “Someone once asked me if I was able to magic myself back into playing baseball, would I rather play baseball or sled hockey? My answer is, undoubtedly, to continue playing sled hockey.”

How to Get Kids Interested in Fitness
August 9, 2022
Where to Find Local Activewear and Outdoor Gear for Kids
August 4, 2022
5 Tips to Motivate Your Child to Try a Sport
August 3, 2022